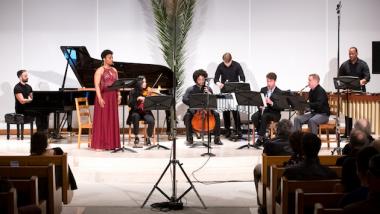 The intensification of interest in the life, times, and music of Julius Eastman (1940– 1990), the gay African-American composer/vocalist/pianist — and master of such provocative titles as Crazy Nigger and Gay Guerilla — has produced a wealth of programming opportunities. The Eastman renaissance has also been propelled by the acquisition of the composer’s archive and subsequent restoration and publication by G. Schirmer.

Saturday the Santa Monica-based music series, Jacaranda, which has championed Eastman’s music, offered a program that looked back on the influential role the Center of the Creative and Performing Arts at the State University of New York at Buffalo had on Eastman’s early career.

Established with substantial funding from the Rockefeller Foundation, the program became a nexus of musical activity and composition in the late 1960s and throughout the 1970s, attracting a succession of “Creative Associates” (part- and full-time faculty) that included, among others, Morton Feldman, Lukas Foss, Terry Riley, Mauricio Kagel, Frederic Rzewski, and Eastman.

Jacaranda’s overview culminated with a performance of Eastman’s Stay on It from 1973 — an energetic, idiosyncratic take on minimalism that overlaid traditional ideas of pulse and rhythmic repetition with an Afro/Cuban influence and a high-flying vocal part (originally sung by Eastman) which was given a wonderful rendition by Zanaida Robles that evoked the spirit of Miriam Makeba.

The program began with a surround-sound performance of James Tenney’s Three Pieces for Drum Quartet (1974–1975) followed by a tour-de-force interpretation of De Profundis, Frederic Rzewski’s theatrical setting of Oscar Wilde’s poetically despairing account from prison. The piano soloist — who is required to play the notes while reciting Wilde’s text and to use his body as an additional percussion instrument --- was performed with a combination of precision and reckless abandon by Adam Tendler.

The second half of the concert began with Lukas Foss’s serial/minimalist hybrid Solo for piano (1981) performed by Scott Dunn. It all led up to the performance of Stay on It.

Compared to the other composers, Tenney’s association with the Buffalo school was tangential; he performed there but was never part of the faculty. His Drum Quartet evolves in three movements: “Wake for Charles Ives,” “Hocket for Henry Cowell,” and “Crystal Canon for Edgar Varese.” The titles, however, are more varietal than the musicality. Each movement establishes a rhythmic structure that is bandied back and forth, fractured, and layered, from toms to bass drums to snares whose sharp beats ricocheted off the walls of the First Presbyterian Church’s sanctuary like rifle shots. The precise percussionists were Dustin Donahue, M.B. Gordy, T.J. Troy, and Sidney Hopson.

A precept at SUNY Buffalo was that no one musical theory was to be deemed “official.” As a result, all the diverse influences of the times found representation. It was a volatile time politically, musically, and chemically.

Of the faculty members that tended toward the political end of the spectrum, none was more outspoken about his agenda than Rzewski. His 1992 setting of Oscar Wilde’s lament of incarceration combines brusque modern tonalities and coolly expressive lines, with percussive attacks. There’s even a brief section of Bach quotation.

At the same time, the score requires an entire set of nonpianistic instructions for the soloist. These include a lengthy dramatic recitation of Wilde’s text preceded by an introductory period of silence (not quite 4’33”). The performance by Adam Tendler was remarkable for its blend of virtuosic piano technique, dramatic inflection, and a panoply of effects including closing the piano’s keyboard lid and drumming on it, and a series of physical directions featuring Bobby McFerrin-style chest thumps and percussive head slaps. There was a quality to Tendler’s voice that seemed to add a post-Stonewall attitude toward Wilde’s persecution.

Lukas Foss played a significant, decade-long residency in Buffalo. As a composer he was noted for a flexibility that allowed him to work in any style at any given time. With Solo (from 1981), he tried to thread a connection between the serial and the minimal, incorporating a 12-tone row and minimalist repetition in the same piece. It’s a flavor profile that seems at odds with itself, with neither the intricate development of a serial composition nor the meditative atmosphere inherent in early minimalism.

All this led up to the exuberance of Eastman’s Stay on It, from 1973, two years after he became a full-time member of the university faculty. It is minimalism with a difference that freely references the influences of Steve Reich and Philip Glass, along with Afro-Cuban jazz, disco, and Motown. It also explores the idea of deconstructive composition. By intent, the initially clearly voiced opening expression that begins the piece gradually begins to stagger, falter, and then begins again, trying all the while to “stay on it.”

The work was composed before the Attica prison riots (which occurred not far from Buffalo) that played an important part in Eastman’s political and musical radicalization and his celebration of his own status as a gay black composer.

Stay on It was a perfectly targeted way to bring this concert and its historical perspective to an end.

Correction: The review as originally published omitted T.J. Troy in the roster of percussionists.