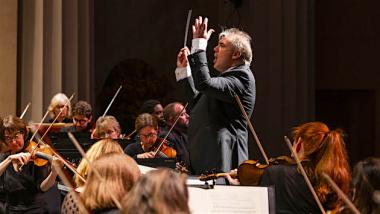 The future of the Los Angeles Chamber Orchestra appeared before our eyes and ears Sunday night (Apr. 28) at UCLA’s Royce Hall. He is Jaime Martín, 53, formerly a first-chair flutist in several London orchestras, a conductor only since 2013, and not even on the radar as a possible successor to Jeffrey Kahane as recently as the fall of 2017.

While the music world speculated upon a list of other guest-conductor candidates for the LACO music director job, Martín slipped in and led the 2017–2018 season-opener — and judging from my conversations with some of the musicians afterward, made a big impression on them. Less than five months later, LACO made him their music director, which surprised many — including Martín himself. While he officially starts work this fall, the concerts in Glendale and at UCLA over the weekend amounted to Martín’s de facto debut — and an auspicious one at that.

Having a front-row seat watching many of the world’s leading conductors as a flutist in the London Philharmonic, Royal Philharmonic and others was clearly a terrific education for Martín. He moves as if he has been wielding the baton since birth. Sometimes his emphatic stick technique reminds me of Zubin Mehta; other times, when cueing in vocal soloists with his expressive eyebrows or dangling the baton in his left hand while waving his right hand gracefully, he brings to mind Leonard Bernstein.

Martín appears to be more into expression and dynamic contrast as opposed to absolute unanimity of ensemble, though that should come as he and the LACO get used to each other. He is an irrepressible public speaker, roaming the stage as he charmed the audience in Spanish-accented English at length before the first downbeat. No question; he puts on a good show.

Martín is going to continue the LACO drive into contemporary music; each of his programs in 2019–2020 contains a new work and the first part of his program Sunday featured the West Coast premiere of Bryce Dessner’s 2018 song cycle Voy a Dormir — which means “I Am Going to Sleep.” The texts of this attractive, alluringly orchestrated, sometimes melancholy, 25-minute quartet of songs are by the Argentine poet Alfonsina Storni (1892 – 1938), who wrote the fourth poem (also called “Voy a Dormir”) two weeks before her suicide. This final song, composed for mezzo-soprano, takes longer to perform than the rest of the cycle combined — and it contains plenty of orchestral interludes, a resigned mood, and a text that basically bids farewell to the world.

Sound familiar? I’ve just described “Der Abschied” (The Farewell) from Mahler’s Das Lied von der Erde, which has much the same idea, placement and structure as Dessner’s piece. And Martín’s mezzo-soprano was Kelley O’Connor, whose dark, gently vibrating timbre — sometimes masked by the busy orchestration in the early songs — made me want to hear her in the Mahler cycle, too, someday.

Repeating the habit orchestras have of mentioning only the most immediately sale-able piece up front, LACO’s headline for this concert simply noted “Mozart’s Requiem.”  That’s marketing for you, but the piece that the film Amadeus made into a quasi-household word happened to be a good thematic companion for the unmentioned Dessner cycle. More importantly, Martín rose to the challenge, powering a forceful, robust rendition that valued emotion and forward thrust over period-performance niceties.

So often the overwhelming first half of the unfinished Requiem — which contains the biggest concentration of genuine Mozart —  makes the stopgap last half seem anticlimactic. But Martín’s unified performance indicated that he values the whole thing equally (in a preconcert talk, he pushed the theory that Franz Xaver Süssmayr must have taken a lot of death-bed dictation from Mozart in the final three sections). Along the way, Martín had the help of a well-balanced vocal quartet (soprano Sarah Shafer, O’Connor, tenor Thomas Cooley, bass-baritone Dashon Burton), though the contrapuntal lines coming from the USC Thornton Chamber Singers could have been clearer. No matter, though; this was a performance that reached out to the audience and seemed not a minute too long.