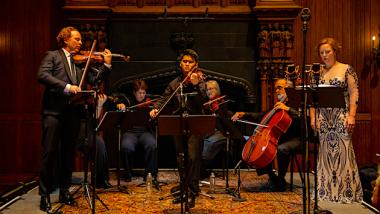 The Violins of Hope are Holocaust-era string instruments, previously played by Jewish prisoners in the European ghettos and concentrations camps. Not only have they been restored by two Israeli luthiers, father and son Amnon and Avshalom Weinstein, but the collection continues to grow (now up to 87 instruments). It has been touring the world since 2008.

The collection’s instruments were first professionally recorded by a major label (Naxos) in March 2018 when the Nashville Symphony used 34 of the violins for the world premiere of Jonathan Leshnoff’s Symphony No. 4 (Heichalos, referring to an ancient Jewish mystical text). 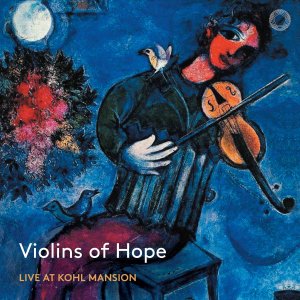 In 2017, Patricia Kristof Moy, the director of the chamber music series at Kohl Mansion in Burlingame, California, began organizing an extensive Bay Area residency that would bring the instruments to area orchestras, chamber groups, schools, community centers, religious organizations, etc. Plans included the world premiere of a new work to commemorate the 75th anniversary of the liberation of Auschwitz on Jan. 27, 2020. It was recorded at Kohl’s concerts on Jan. 18 and 19, 2020, and it is one of the works heard on this new Pentatone album, Violins of Hope: Live at Kohl Mansion.

The album is packaged so beautifully that it is an argument in itself for the value of actual CDs. The reproduction of Marc Chagall’s Blue Violinist on the cover is gorgeous. There are photos of instruments, artists, and the actual concert at Kohl. The liner notes are thorough, well-organized, utterly literate, and easy to read. Texts are included, as are recording details. Also, soloists and players are each easily located across the full-ranged stereo spectrum, which makes for remarkable tonal clarity. The album is a work of art in itself.

In the song cycle, Intonations, composer Jake Heggie and librettist Gene Scheer have let loose a highly imaginative, dramatic flourish of inspiration. The original owners of the violins are dead, but their instruments survive, and here it is the violins that voice the traumatic situations in each movement. Combine that conceit with Heggie’s basically tonal music and Scheer’s lyrics, and all the elements fit together so naturally that calling it a 19th-, 20th-, or 21st-century work isn’t even a consideration. Add mezzo-soprano Sasha Cooke in peak form, with violinist Daniel Hope and a superb string quartet of players from the San Francisco Opera Orchestra (violinists Kay Stern and Dawn Harms, violist Patricia Heller, and cellist Emil Miland), plus warm, balanced sound and an intimate atmosphere, and the results are a seamless experience.

You might think emotions couldn’t curdle more than when Cooke opens with an eery, quavering, sliding “oooo” that introduces the text to “Ashes,” human ones that fell out of a violin case Amnon Weinstein opened so he could restore the instrument inside. Cooke’s use of straight tone evolving into vibrato with poignant Jewish folk-like portamentos in both the voice and instruments establish emotional intensity immediately.

Heggie gives his most powerful overarching structure to the wrenching text of “Exile,” which mixes narrative with dialogue. The violin’s owner, Erich Weininger (he’s in one of the album’s photos), can finally see Palestine, but the ship he’s on is out of fuel and sinking. Will they get to the Promised Land? The refugees strip the ship of wood for fuel; will Erich’s violin be “just another piece of wood to feed the flames”? Cooke, representing the violin, is devastating singing, “Erich is gone. I am still here. And I cry again like Isaac in Abraham’s arms.” (I need a breather!) 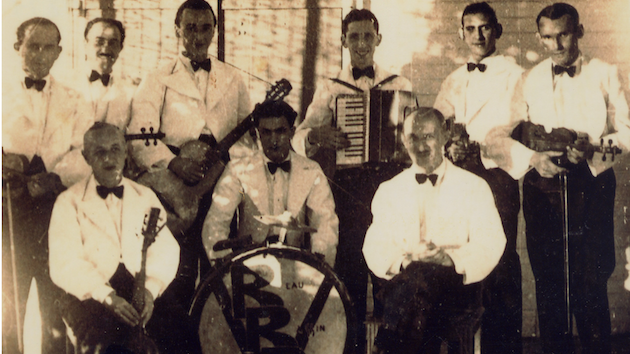 “Concert” opens with the quartet echoing Shostakovich in his sardonic Jewish mode. I relished the quality of both the players and the instruments. Ah, but emotions can curdle even more than in “Ashes”. Henry Meyer is ordered to play a solo concert for Nazi officers. Where? In a gas chamber where family and friends were murdered. Speaking to his violin, he says, “Forgive me. But if I play, I will not die today.” This calls for a violin waltz à la the cruel one in Berg’s Wozzeck, as the mezzo sings the mourner’s Kaddish. “The concert in the gas chamber is over. There is even some applause.” Here and in other movements, are the gorgeous, poignant violin solos played by Daniel Hope or by the quartet’s leader, perhaps. It’s not clear.

“Motele” is a song of revenge-accomplished. Motele Schlein was a 9-year-old violin prodigy. The music quotes bits from the first two movements of Mendelssohn’s Violin Concerto. By the time Motele is 12, his family is dead, and he is chosen to concertize in the Officer’s Club night after night. But each night he also smuggles gunpowder into the basement to build a bomb, which he ignites. Listening to the cries of the dying, he holds his violin close, as his parents whisper, “Bravo, Motele! Bravo.” This is not the place to argue about “an eye for an eye”; rather, my problem here is that Gene Scheer’s texts are becoming increasingly pedantic — narrative without poetry and music more reminiscent of Fiddler on the Roof than personal destruction.

In “Feivel” an old man has lost everything. Before he poisons himself, he gives his violin to Feivel Wininger so he can make a living making music. A wedding celebration ensues. The violin says, “Pull the bow across my strings. I will sing, and there will be family and friends together again.” Too bad the simplistic narrative, again shy on poetry, is not enhanced by more Fiddler on the Roof sentimental music. “Feivel” is followed by “Lament,” a song-without-words for string quartet, which lets both the players and the beautiful instruments shine.

It is a pity that Heggie and Scheer chose to end with “Liberation.” It symbolizes the wheel of history coming round, as 17-year-old violinist Sean Mori plays a solo, symbolizing hope. The text here is not just pedantic; it’s yet more exhortation to “Remember!” All right, already — I got the point earlier. At the end, Heggie’s music becomes sappy Schindler’s List stuff, while Cooke ends with the “oooo” that began Intonations — only by this point it reminds me more of Percy Faith’s female “oooing” choir in “Away in a Manger.”

After a 13-second pause, the album’s warmth and intimacy carry over into Schubert’s Quartettsatz, D. 703, the only movement he ever completed of a planned String Quartet No. 12. The liner notes describe it as an “amalgam of restlessness and serenity,” which make it the perfect sequence to Heggie’s wrenching song-cycle. Right out of the chute, the players have such tight ensemble and rhythm to which they’re free to add light touches of rubato, while maintaining a superb flow, always leaning forward but never rushing. If the second violin and violist had brought out more of the galloping triplets under the second theme, the results would have been even better.

After a 12-second pause, they turn to Mendelssohn’s String Quartet No. 6 for an almost thematic concert conclusion. Here is yet another “amalgam of restlessness and serenity,” written in the aftermath of the sudden death of Felix’s sister Fanny at the age of 42. (Felix died just two months later from a stroke at 38.) The opening movement demands a sweeping arc of energy, intensity, and shifting emotions, even in serene moments. Perhaps the players were tiring by this point in the concert. Their ensemble, intonation, etc. remain excellent, but here and in the next movement they lack that necessary edge of fury. They lose steam, especially in the second movement’s trio. The Adagio movement is the work’s one moment of soulfulness, but the players don’t quite grab hold of the inner theme that pulls the music along. In fact, they seem to be pressing forward at a few points. The result: a lament without poignancy. In the finale they finally do work up to some fury in the final measures. In brief, this is a fine performance in the context of the entire album, but in the Mendelssohn, they can’t compare to the Carmina Quartet on Denon.

At the end of the Schubert and Mendelssohn, it takes four to five seconds for the resonance to fade. It was obviously added during post-production. On many albums it would sound fake or gimmicky, but not on this one. Judging from the photo of the actual concert, I suspect the acoustic was rather dry, and the engineers enhanced it to a warm, satisfying level, God bless ’em.

Gil French was concert editor of American Record Guide from 2005 to 2020. He has reviewed recordings and concerts since 1988. He also served as midday classical host in public radio from 1988 to 2003.

Violins of Hope Are “Ultimate Survivors”

An anthology of the violinist's intimate livestream performances with special guests is a relaxed audio bouquet of comfortable standards.