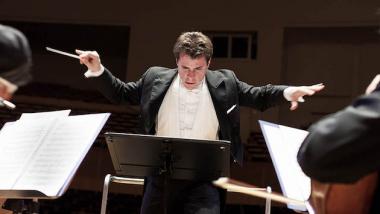 I like to think I have a pretty good idea of how the San Francisco Symphony plays. Once in a while, though, a guest conductor comes in — last season, David Robertson; last weekend, Jakub Hrůša — who changes everything. On Friday, even Davies Hall sounded different.

Everything sounded unusually immediate. And, without obvious effort, all the right things came out — even the in the violin concerto, Shostakovich’s No. 1. As performed by Karen Gomyo, it was a revelation.

From the first notes of the reflective Nocturne, Gomyo played like a chamber musician; it was the kind of quietly excellent, self-assured musicianship that commanded stillness from the audience. Her sound was hushed and silken in a way that emphasized the movement’s more romantic moments — sweet, but never sickening. (The same was true of the encore, an Astor Piazzolla tango she elevated with every note.) In fact, the slow Passacaglia felt, surprisingly but not ineffectively, beautiful in a way similar to the lush Borodin work later in the program. The music cried, sometimes, but it also flowed, creating a melodious quality distant from the somber, funereal tone that’s often associated with Shostakovich.

In the cadenza, it was as if all the notes were natural ring tones. Moments in the Scherzo, too, were bell-like, yet other passages were forceful and razor-sharp. In this nuanced performance, probably the only sound Gomyo didn’t do was ugly — another characteristic that’s often liberally applied to the music of this composer. And the orchestra played magnificently throughout. The accompaniment in the low strings, in particular, was both clear and appropriately unobtrusive; and the cutoffs were placed with utmost care.

Under Hrůša’s direction, in fact, the orchestra practically seemed to revere Borodin’s Symphony No. 2, a once-popular work that, in this country at least, has fallen away from the repertoire in recent decades. The way that Hrůša pressed for the strings to mute even more their accompaniment in the Andante’s first phrase, for example: Not every conductor would push a group so hard for Borodin, but when the orchestra plays this well, it really does sound like great music. (Hrůša is currently Chief Conductor of the Bamberg Symphony, and I hope he is in the running for musical director of S.F. Symphony.)

The opening Allegro is weighty and dramatic (not unlike the finale of Dvořák’s “New World” Symphony, which came later), but gained a certain pliancy on Friday — one that highlighted the range of moods Borodin invents. And creative orchestral colors, especially in the Finale, such as the violins’ ricochet in response to the sparkling of the tambourine and triangle, just may be Borodin’s genius (or perhaps the edits of Rimsky-Korsakov).

These two works could have been their own program, so Bartók’s Miraculous Mandarin Suite felt like a welcome encore. Deftly balanced playing made the pantomime ballet’s plot (in which a beautiful girl acting as bait makes more dramatic the exploits of three thieves) come to life.

The score is colorful and dense, but in Friday’s performance, even the opening whirls representing the bustling streets outside the slum sounded impossibly clear. Sumptuous clarinet playing easily evoked the girl’s three dances, and the sheer volume of the music, as it reached its climax, was thrilling — as unflinching as the story itself.

Together with pianist Piotr Andreszewski and the S.F. Symphony, the Czech conductor honored the premise of the “Pursuit of Passion” program.

Violinist Karen Gomyo approaches music with the assurance and sensitivity of someone who is doing exactly what she has always wanted to do.

If you’ve been dying to hear Shostakovich, his Symphony No. 14 is the one for you