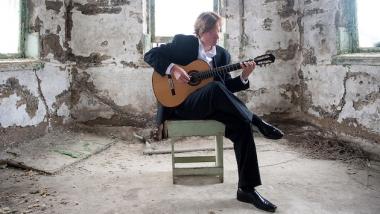 Jason Vieaux, currently a San Francisco Performances artist-in-residence, has an impressive list of achievements, including the Guitar Foundation of America International Guitar Competition First Prize, a Naumburg Foundation Award, and a Grammy Award. At a concert presented by San Francisco Performances and the Omni Foundation in Herbst Theatre on Oct. 26, he offered a program of major works by J. S. Bach and the modernist Swiss composer Frank Martin, innovative transcriptions of the music of Duke Ellington and Antonio Carlos Jobim, and classical guitar standards.

The recital began with Domenico Scarlatti’s intimate, elegant, and lyrical Sonata in A Major, K. 208, in a beautifully ornamented arrangement by the Cuban master Leo Brouwer. Vieaux’s dulcet tone, flowing rhythm, and technical mastery of the intricate ornaments created a welcoming atmosphere and served as a perfect opening for the evening.

Mauro Giuliani was the most famous guitarist-composer in Vienna during the first two decades of the 19th century. He performed in the world premiere of Beethoven’s Seventh Symphony as a guest cellist. Giuliani’s Variations on a Theme of Handel, Opus 107 is based on the final movement of Handel’s Suite in E Major, HWV 430, commonly known as “The Harmonious Blacksmith.” It is a mercurial combination of grace, lyricism, and dazzle but does not cross to deeper levels. Vieaux made this light but appealing music sing.

Frank Martin was Switzerland’s most important 20th century composer. His sole work for guitar, Quatre pièces brèves (Four short pieces), is one of the most influential and expressive works for the instrument from the first half of the 20th century. Since the Spanish virtuoso Andrés Segovia, for whom the piece was written, never performed it, its initial success was in subsequent versions for solo piano, then for full orchestra, before an influential 1967 recording by Julian Bream introduced the work to guitarists.

Quatre pièces brèves is written in the form of a Baroque suite but makes use of a very individual adaptation of Arnold Schoenberg’s 12-tone compositional technique. It is in four movements: The Prelude uses thematic metamorphosis to create a brooding, improvisatory atmosphere; the Air is essentially a Baroque sarabande; Plainte uses complex rhythms, influenced by Martin’s work with Emil Jacques-Dalcroze, against an insistent, chordal ostinato to create a moving personal lament; the concluding gigue-like movement is a highly chromatic but nonetheless clearly tonal movement with Baroque dance rhythms. It was a perfect foil to Bach’s sonata, now heard as through a glass darkly.

Vieaux transitioned to lighter music with a waltz, Op. 8, No. 4 by Agustín Barrios. This was an intensely romantic piece reminiscent of Chopin; Vieaux perfectly captured its exuberance. The great Duke Ellington’s “In A Sentimental Mood,” in an arrangement by Vieaux, portrayed the opening blues lament with expressive slides and bent notes and the bridge’s sensuous modern harmonies with a silky, smooth tone. “A felicidade” (Happiness), composed by Antonio Carlos Jobim in 1958 for the movie Black Orpheus, is a bossa-nova song about the impermanence of happiness. Vieaux played the solo guitar arrangement by Roland Dyens with rhythmic drive, masterful ease, and great panache.

The recital concluded with a captivating performance of Suite del Recuerdo (Suite of Memory) by José Luis Merlin and dedicated to the memory of the many thousands of people “disappeared” during the days of the military junta in Argentina. Vieaux’s performance of the nostalgic and folkloric music filled me with sorrow for the many victims of the political violence of our own time.

No waiting for the encores for the smiles and fun to appear: the guitarist and accordionist were on the same page from the beginning.

The unusual pairing of violin and guitar works out with two virtuosi sharing the Weill Hall stage at the Green Music Center.