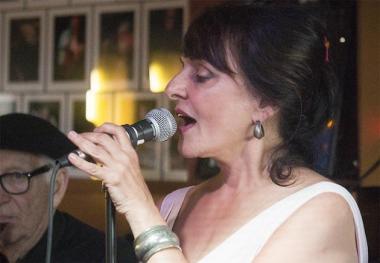 The ensemble supporting a sophisticated session of vintage jazz by vocalist Kay Kostopoulos and reed man Noel Jewkes on Tuesday evening constituted a virtual all-star representation of the 7 Mile House's music calendar which will prevail on most evenings of most weeks, now that the Golden State Warriors have won another trophy. The venue, on Bayshore Boulevard near Geneva, just inside the Brisbane city limits, has functioned as a family-friendly restaurant and sports bar, as well as a music destination.

Drummer Vince Lateano and alto saxophonist Andrew Speight (who played this Tuesday’s first set) are the co-anchors of the Doghouse Jam every Sunday at 5 p.m. Trumpeter Dave Bendigkeit and bassist Chris Amberger appear on the first Monday of the month with the Keepers of the Flame. Tenor saxophonist Tod Dickow and keyboardist Larry Chinn are part of the Al Molina Sextet, blowing big band charts on first Tuesdays.

Jewkes, who turns 78 next week, has himself worked in the local jazz scene for over 35 years. He and Kostopoulos, also an actress and Stanford faculty member, are regularly paired on the stage of the Sausalito Seahorse. Jewkes kicked off Tuesday’s first set playing soprano sax on an instrumental setting of Harold Arlen’s “Get Happy,” with Speight, Bendigkeit, and Dickow swinging hard.

On her first couple of vocals — “From This Moment On” and “Never Never Land” — Kostopoulos played it safe, sticking close to the standard melody lines. Although she was somewhat too low in mix, Kotopoulos and the band sparkled on Rodgers & Hart’s “Lover,” though the solos were frustratingly brief. With Horace Silver’s “Enchantment,” to which Kostopoulos had penned her own lyrics, the ensemble seemed to hit its stride. Bendigkeit put a characteristic sly shine on the Silver melody, later parrying playfully with Jewkes on tenor, who rendered his own solo alluringly noir.

For Franz Lehár’s “Yours Is My Heart Alone,” an operetta aria rarely heard in jazz sets, Kostopoulos’s original English lyrics were handsomely squired by Speight, who can spin bebop magic into any genre. The similarly flexible Amberger, a veteran of Art Blakey’s Jazz Messengers and other world-class groups, sounded a suave solo dusted by the cymbal work of Lateano, himself an alumnus of Woody Herman’s and Cal Tjader’s bands.

The signature glow in Kostopoulos’s tone warmed the increasingly cool evening bayshore air drifting in through the open door, as the first set came to a close with “Prisoner of Love,” arranged by Jewkes, the type of comfortable ballad to which this singer is well-suited.

7 Mile House owner Vanessa Garcia, a drummer and singer in her native Philippines, confided that she's currently in the process of test-driving "a diverse mixture of jazz bands and artists". To her regularly scheduled musicians, she provides guaranteed payment, a meal from the ample menu (American, with Filipino specialties), and aggressive promotion, which a couple of years back attracted both news media and a crew from the San Francisco Symphony, filming a profile of jazz-loving principal percussionist Jacob Nissly.

Jewkes's original “Viol Blues” began Tuesday’s second set, with the composer charmingly channeling a dusky ’40s feel. Sam Cady sat in for Chinn on this and a couple of other numbers, and the audience proved audibly more attentive and responsive to the musicians.

Announcing a “funky Cole Porter,” Kostopoulos effectively sold “Love for Sale,” dressed in the brightly colored snap of early sixties pop, with Bendigkeit’s trumpet evoking Maceo Parker. “I Remember You” was rather more swinging than sentimental.

For Dizzy Gillespie’s “A Night in Tunisia,” Pepe Jacobo replaced Lateano on drums, with spicy Latin accents appropriate to the musical climate. Beside him, Amberger sustained an adrenaline pulse, and Dickow called like a sheik in love. Kostopoulos’s tone helped gather them all to an exotic tutti finish.

The singer came back bopishly perky for Harold Arlen’s “When the Sun Comes Out.” On this and Benny Goodman’s “Lullaby in Rhythm,” the horns at times unraveled slightly, then regained their connections.The two tenor saxophonists provided a virtual case study in style, Jewkes favoring a warm burnished Lester Young approach, Dickow more inclined towards post-bop cool.

Sam Rudin, owner of The Back Room, a newer jazz venue in Berkeley, stepped in on keyboards for the gig’s closer, “All Blues,” with Kostopoulos interpolating a medley to the similarly bluesy “See See Rider,” originally recorded 94 years ago by Ma Rainey. Trumpet and saxes set out a brassy pillow for Kostopoulos, then proceeded to their own valedictory solos, joined by Amberger on arco. This was a testimony to the potential of a like-minded ensemble, and of an evening well-spent.