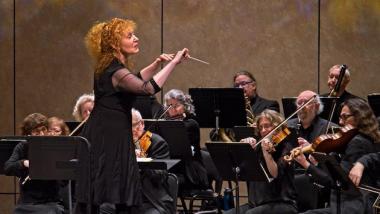 Jeannette Sorrell Is a Dynamo With the Philharmonia Baroque Orchestra

On Saturday evening, Nov. 16, Philharmonia Baroque Orchestra performed a mix of classical favorites and lesser-known works in a concert at the Herbst Theatre. Jeannette Sorrell, founder of Cleveland’s Baroque orchestra, Apollo’s Fire, and acclaimed harpsichordist and conductor, led the orchestra in their energetic performance. The concert spanned Mozart’s short life and included music by his French contemporary, André Grétry.

Philharmonia Baroque Orchestra is now in its 39th season and, thanks to the leadership of Nicholas McGegan, is recognized as America’s leading historically informed ensemble. Partnering with Sorrell for this week of concerts was an obvious choice; she brought the energy and creativity that made Apollo’s Fire so renowned and granted her celebrity status within the early music world. This was most evident in the final selection, Mozart’s Symphony No. 40 in G Minor, K. 550. Sorrell’s interpretation conveyed the beauty and subtleties of the music, dispelling any conceptions that the famous symphony would be perhaps too familiar or impossible to renew.

The fourth movement, Allegro assai, posed a technical challenge given Sorrell’s choice of an extremely brisk tempo, but the orchestra rose to the occasion. The pace allowed the melody to float freely — especially through the strings’ rich playing — and avoided getting bogged down in individual bars; the contrasts between slow/piano sections and quick/forte ones were also very pronounced. These choices created a thrilling experience for the listener, and the orchestra succeeded where others may have fallen apart.

The movement also contains quite a few unexpected modulations and pauses meant to catch the audience by surprise,  evidence of Mozart’s sense of humor. These stood in stark contrast to the music of André Grétry, which lacked the same level of sophistication and self-awareness. Grétry’s orchestral suite from the opera-ballet, La caravane du Caire (The caravan of Cairo), is an overt and stereotypical portrayal of the Ottoman Turks, a fashionable topic around 1783, the year of its composition. The “Danse égyptienne” (Egyptian march) depicts its “exotic” subjects by relying on chromatic lines and a slow, heavy accompaniment as a foundation for excessive ornamentation from the violins and high woodwinds. Their “civilized” enemy in this opera-ballet, the French military, is portrayed through dotted rhythms and fugal imitations.  These characterizations were completely exaggerated and lacked subtlety or musical integration, and unlike Mozart, their comical intention has lost its charm after 250 years.

Unfortunately, the Oboe Concerto in C Major, K.314/271k, was another standout for all the wrong reasons. Likely known to most as Mozart’s Flute Concerto in D Major, it was originally conceived as an oboe concerto and transposed for flute later. The piece can sound equally lovely on flute or oboe, but Gonzalo X. Ruiz’s playing missed the mark. He suffered serious issues with clarity and sloppy playing during fast runs and arpeggios. The intonation also posed a challenge, and became more noticeable in the legato passages of the Adagio second movement. Overall, Ruiz seemed uncomfortable onstage, especially during the cadenzas. Ruiz was hesitant, at times taking gratuitous pauses, at others rushing to return to the safety of the full orchestra. He did play a very expressive, operatic second movement, and produced a lovely vibrato. However, the multitude of technical issues undermined his musicality.

Jeannette Sorrell is an absolute dynamo onstage and a pleasure to see conduct. She mustered incredible power from the cellos and basses in the suite from Grétry’s comic opera, Zémire et Azor, yet did not sacrifice any intensity in the reserved Andante of Mozart’s Overture to La finta semplice (The pretend simpleton), K. 51. Sorrell is a force to be reckoned with and consistently proves that her reputation is more than deserved.

Jeannette Sorrell: Undeniable and on Fire

The conductor brings Apollo's Fire to Cal Performances and talks about her career and the ensemble she founded.