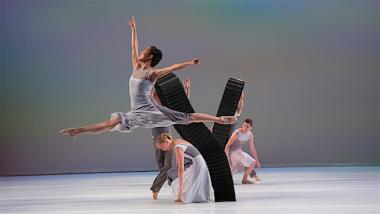 Hail and farewell, Jessica Lang, a much in-demand choreographer whose New York-based company, Jessica Lang Dance, is folding in May. Its San Francisco Performances debut last weekend at YBCA was an impressive showing of Lang’s versatility and spot-on performative instincts, as well as her company’s prowess.

But here’s the thing: Lang’s been working nonstop, according to her publicists, for the last seven years just trying to keep things afloat and growing. She’s decided to choreograph exclusively for other companies, where she’s in demand, and to shed the demands of running the troupe — the biggest of which has been getting enough financial support. Generally speaking, it’s not what choreographers want to do. It’s a question of art versus commerce, for the most part. If you take time for one, you must short the other. And who knows how hard it’s been for Jessica Lang? When you have a superb handpicked group of dancers, you hardly want to shout out your troubles from the rooftops. Dancers need security too; dancers might think of leaving.

If this sounds like I’m about to make a pitch for increased governmental as well as foundational support for dance, you’re absolutely right. In the past few years we’ve lost Ballet San José, Cedar Lake, and startup companies we don’t even know about. So when I’m watching Lang’s fine, full-company Thousand Yard Stare, set to Beethoven’s sweetly doleful String Quartet No. 15 played live by the chamber group One Found Sound, about the war machine and its murderous effects, part of the mental backstory becomes how much of that narrative’s war money could go to the arts if peace were to break out. Idealistic, of course, but there you are, and it’s fine that Lang, in the great tradition of The Green Table and so many other works, brought it all up.

To be more concrete about Lang’s prospects, as long as there are companies that can pay her to make dances (costs rise ever higher as purse strings pull ever tighter), the audience rewards will be substantial.

Thursday night’s show opened with Lyric Pieces (2013), set to assorted Grieg, a delightful introduction to the company of nine that shifted from allegro to adagio, ensemble to pas de deux. It was adorned with Stephanie Forsythe and Tom McAllen’s cleverly designed black-paper props that accordioned in or out (unfortunately, handling them proved a rather distracting bit of stage business involving everyone), some large enough to create an enclosure from which the company gracefully sallied forth, the women in soft slippers but strongly ballet-versed; the men fluent yet athletic, committed lifters who made all (and there were plenty) look easy and graceful. The pianist was Sarah Cahill.

The Calling (2006), danced by the stunning Kana Kimura, had as gorgeous design element and gimmick a white, jeweled evening gown by Elena Comendador. Its gigantic circle skirt, flared, took up the entire floorspace. At first, it sat there as Kimura, its willing prisoner, did lovely ports de bras to music by Trio Mediaeval, reaching wide, gracefully tilting her head on its swanlike neck. Then, as she slowly turned, the gown torqued itself around her feet but, as she gradually twisted in place, rose in a continuous rope from the floor. Who needs story?

This Thing Called Love (2018), the all-hands closer, is by and dedicated to Tony Bennett, the singer and painter and, from his exuberant voiceover, a most happy fella (still singing, painting, and kicking in his 90s). His artwork, by Anthony Benedetto/Tony Bennett, splays across the proscenium, a coast-to-coast Valentine: New York City skyline, Bridge in a Fog (that would be the Golden Gate), Crazy Rhythm (musicians at work), Central Park Snowstorm. This is a chance for the whole company* to go Broadway, and they never disappoint. Lang laces their moves with jitterbug riffs as Bennett on recording sings “Crazy Rhythm” and “It Don’t Mean a Thing (If it Ain’t Got that Swing),” close holds for “Smile,” a dynamic Cole Porter medley with flirty partnering and, would you believe it, “I Left My Heart in San Francisco.” Milan Misko was the onstage Tony, delivering Bennett with Bennettovian charm.

Jessica Lang Pulls the Plug on Her Company

The acclaimed, prolific choreographer is making more time to do what she does best: create.

The company’s artistic director is keeping with the times.