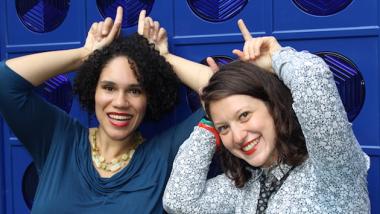 Tucked away in Manhattan’s Lower East Side is 1 Rivington, a small gallery space that moonlights as a chamber music hall. The polymorphic Metropolis Ensemble has made it one of their regular venues for presenting new work in artist-led programs, and their latest offering was Loisaida, a tribute to the Lower East Side featuring string and vocal music by Jessie Montgomery, Jessica Meyer, and Eleonore Oppenheim.

With two short song cycles and one stand-alone aria, the evening was heavy on vocal music, with mixed success. Meyer’s Space in Chains, a setting of three poems by Laura Kasischke for voice and viola, fell victim to its own text: Kasischke’s works are dense and richly ambiguous in a way that music tends to flatten; they’re the kind of poems that sing better unaccompanied. Meyer’s music, performed by Mellissa Hughes and Meyer herself, had satisfying moments of warmth, dread, and scurrying perpetual motion, but it failed to gel with the words into a greater whole.

Montgomery’s Loisaida — a reserved setting for voice and cello (Gabriel Cabezas) of the 1974 Bimbo Rivas poem of the same name — fared somewhat better, but the most convincing was her Lunar Songs, a commission from ASCAP for the Leonard Bernstein centennial written in collaboration with poet J. Mae Barizo. (Barizo was the only poet credited in the program; I’m not sure why Rivas and Kasischke didn’t have their contributions acknowledged in print.) The three songs — for voice, violin (Montgomery), viola, cello, and contrabass (Oppenheim) — share the spirit of Bernstein, if not his style, drawing on both popular-dance inflections and spiritual yearnings for eternity. The first movement, in particular, featured a hazy, sweltering accompaniment under a dreamy vocal line, as if one of the Trouble in Tahiti jazz singers had clocked out, gotten drunk, and finally let the falsely cheery smile fall away. Unfortunately, 1 Rivington was not the best venue for this premiere; in the small space, the strings tended to overpower Hughes, even as she was clearly working hard to project over them. I hope I get the chance to hear these songs again in a venue with better acoustics.

The balance was much better in the instrumental pieces. Montgomery’s Duo for violin and cello is an exploration of friendship, from playful, rambunctious camaraderie to helpless, desperate yearning. The faster outer movements featured spitfire volleys of notes from both instruments, while the slow central movement was built around layered chords that called for a seamless blend between the two players. Montgomery and Cabezas were more than up to the task.

Montgomery and Oppenheim play together under the moniker big dog little dog, and they rounded out the program with three pieces from their eponymous album. Each piece could be described as a study in a specific technique, but such a dry description would belie their expressive power. So while Woods explored the sonic possibilities of hitting the strings of their instruments with sticks instead of normal bowing techniques, it also built into a frenzied dance with a breathless climax. Ultraviolet was a study in contrasts and offered Oppenheim a chance to display truly virtuosic pizzicato technique. Blue Hour was the most astonishing, building from thin, whispered unisons into a cosmic revelation — at the climax of the piece, after a long passage in the upper register, the bass plunges into the depths with the force of a splitting atom.

Even in the relaxed atmosphere, the performers sang and played with precision and conviction. For all the acoustic issues 1 Rivington has, it’s undeniably thrilling to see such high-caliber performers at such close range. It’s also refreshing to see them so at ease, casually addressing the audience and inviting us in less as anonymous spectators than as fellow members of one artistic community. It’s a vibe that’s more than worth missing a vocal line here or there.

Performers of all stripes gather to explore the extremes of contemporary vocal music.