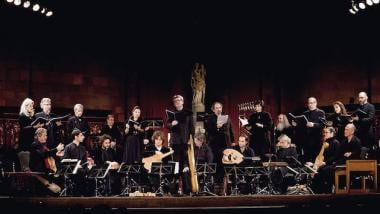 Chiaroscuro is one of the most dramatic effects in Baroque painting, contrasting light and darkness — a ray of sunlight shining through the darkened room, illuminating a startled face. The Italians named it, but the Spaniards knew it as well: the great paintings of the Iberians Ribera and Zurbaran, like those of the Italian Caravaggio, dazzle our eyes with brilliant color and sharp-etched form while the deep shadows invite us to contemplation and hints of things unseen.

Listening this weekend to the stimulating and profound music of La Capella Reial de Catalunya and Hespèrion XXI, directed by the great viola da gamba player Jordi Savall, I felt as if I’d been transported into one of those paintings, moving between light and shadow not with my eyes but with my ears. The Barcelona-based ensemble of singers, gamba players, harp, guitar, and percussion was brought to the Bay Area by Cal Performances and performed to a packed house in the acoustically warm space of Berkeley’s First Congregational Church.

The program was a varied program of instrumental and vocal works, most of them associated with the Baroque Spanish theater. As in the London of Shakespeare, Spanish theater in the “Golden Age” of playwrights Lope de Vega and Calderón de la Barca incorporated the lively popular musical forms of the day: bawdy ballads, wild dances, and love songs.

From the very first, the program was built on brilliance. Sometimes the light radiated from the song text, welcoming spring or enjoying the “sweet smile of the dawn.” Or, in a series of religious songs — wonderfully dance-filled and joyous — how could one resist lines that praise the baby Jesus, “the glory of Bethlehem, bright with beams of sunlight and shafts of ice.”

And the sparkle of the music! Dance rhythms prevailed in many of the pieces, but even when the feet didn’t tap, the beat was vibrant. Central to the ensemble — musically and spatially — was percussionist David Mayoral, whose military-style drum set the tempo for many of the pieces, and whose work on the tambourine, maracas, and (I think) castanets was both subtle and stirring.

Plucked strings filled out the rest of the rhythm — Xavier Díaz-Latorre on vihuela (the Spanish version of the archlute) and guitar and Andrew Lawrence-King on the Baroque harp. Each of them took a place in the limelight early in the program for brilliant solos: an elegant set of dances on the guitar and a thrilling fandango on the harp.

Ensemble pieces alternated between instrumentals and vocals. A quartet of violas da gamba played with the rhythm band, often joined by a quintet of singers (including one musician singing one line while playing a different one on the gamba!). The whole group, lightly conducted by Savall, played with an infectious camaraderie, full of smiles and eye-contact, a kind of communal festivity that translated into music that was both tight and flexible, as in the often-performed and always thrilling chaconne “A la vida bona” by Juan Arañés, invoking the wild and sexy nature of that New World dance.

The musicians were always attentive to each other’s sounds and generous enough to get out of the way when another’s part came to the forefront. A slight imbalance in the sound came from placing the singers behind the instrumentalists, too far from the front of the stage to be heard well.

I opened this review invoking the expressive contrasts of Baroque painting. With all the brilliance of this music, there was a contemplative core to it as well — not so much a gloom but a tender resignation, an acceptance that the zest of carnival (as with life) is sharpened by its brevity. “It’s time to clear away, for time is fleeting and the day is short,” as one song by Lope de Vega put it. Another song, “Quedito, pasito,” imagines a lover quietly watching an adored one sleep: “Go gently, make no din, but give him this brief repose”: tender, erotic, and (as with the best Renaissance texts) always implying the vulnerability of human life and love.

It was music director Jordi Savall himself who most embodied the interplay of light and dark in the program. His exceptional performances on the viol were radiant with virtuosity — breathtaking rapidity and range (notes octaves higher than one could imagine on the treble viol) and sparkling freedom (several wonderful pieces were improvisations with Savall in the lead and the rest of the ensemble intently supporting his inventions). And at the same time, in all of Savall’s playing we heard the dark, cantabile tone inherent to the viol as an instrument, made all the richer by his particular intensity of phrasing.

The program concluded with all the forces coming together for a robust Nativity song, “¡Ay, que me abraso!” by the Mexican composer Juan García de Zéspedes. Every line in this guaracha (a form that might be called Cuban music-hall entertainment) ends with the same expression of wonder and joy — "¡ay!" True to the inventiveness and improvisatory vigor of the whole concert, each of these exclamations came with a new and surprising affect.

What a joy to be both entertained and moved at the same time; like the Christ Child in the guaracha I mentioned above, we can both laugh and cry at once —

A concert that at once recounts the brutality of slavery while embracing the musical cultures it brought together.