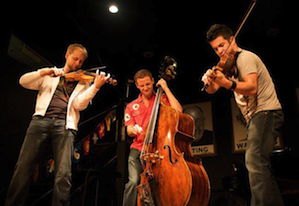 Joy in the New at Cabrillo Festival

If Beethoven’s “Ode to Joy” ending to his Ninth symphony is so great, why do so few composers learn from it today? Pain, depression, angst, violence: All are abundant in today’s symphonic music. But joy? Saturday’s Cabrillo Music Festival concert was a case in point, though thankfully at least one of the three composers seemed to know what joy was, and splendidly communicated it to a riotously appreciative audience.

The most headshaking event of the concert was its second half, entirely devoted to Mark-Anthony Turnage’s 38-minute Speranza. The title is Italian for hope; its four movements are all titled Hope, in Arabic, German, Gaelic, and Hebrew respectively. In other words, Hope: Hope, Hope, Hope, Hope. But I heard none of that bottom-of-the-Pandora’s-box feeling in the music, only Nope: Nope, Nope, Nope, Nope.

Not that that is a problem, the many evils in the aforementioned box have inspired many a composer’s better works. But Speranza is not in the Inspired category, despite one advantage: clear, not-too-numerous, motives, easily grasped due to frequent repetition. The disadvantage to my ears is the predominantly thick orchestration. Turnage mixes his tone colors so often in the same registers — flutes and a soprano saxophone play the same melodic line, for example. The result, analogous to colors in painting, is all too often different shades of mud brown. Turnage does employ some unusual instruments, including a duduk and a cimbalom. In the case of the first, a whiney Armenian oboe with a tinge of clarinet; the sound adds some interest. The cimbalom, however, seemed far less necessary to the musical train of thought. Overall, Speranza sports an extravaganza of shrieks, bangs, thuds, and dirges, but the result, as the storm clouds gather, is as hopeless as trying to build an ark out of bricks.

More of a sketch rather than a piece, but one showing considerable inventiveness and promise: TJ Cole is another great find in Music Director Marin Alsop’s stable of composers.

The opener on the program was TJ Cole’s Megalopolis (2013). Written when she was 21 and a student at the Curtis Institute in Philadelphia, the 5½ minute piece, we were told by the composer, represents impressions from her first exposure to big-city life (Cole had come to Curtis from a suburb of Atlanta) that included “terrifying and overwhelming emotions.”

Far from being a soundtrack to a horror movie, however, it’s more like observing a tramping elephant herd from an only semi-safe distance. The opening sounds are ingenious. A bass drum thuds, then is answered by a low tuba snort on the opposite side of the stage. The instruments start a rhythm of thudsnorts and are joined in by low piano chongs. The rest of the orchestra eventually joins in developing a kind of chaos, with a very brief respite of chimes (a churchyard, we were told). More of a sketch rather than a piece, but one showing considerable inventiveness and promise: Cole is another great find in Music Director Marin Alsop’s stable of composers.

Furthermore, Higdon’s original and energized, bluegrass-infused licks kept everyone on their toes in the outer movements. The middle movement’s respite replaced toe tapping infection with heart messaging harmonies. That the movements were named after specific Smokey Mountain rivers seemed irrelevant, since the third sounded so much like the first.

Alsop commented during a “Meet the Composer” Q&A earlier in the day about how impressed she is with her musicians, how every year they “raise the bar” by arriving all the more prepared to play even the most challenging new works, spending “thousands of work hours” before the festival itself. “We can’t get our music soon enough [from the publishers],” she lamented.

Alsop was bragging for good reason. Her band is getting better every year such that it is now at a very high professional level, and it showed over the weekend that it can take on six new works as if they were Beethoven bagatelles — odes to Elise, if not often enough, Joy.