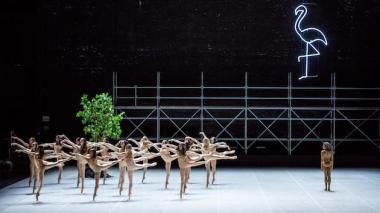 Joy Is the Operative Word for the Joffrey Ballet at Zellerbach

The opener, Justin Peck’s 2012 In Creases, for an ensemble of eight, was the first piece Peck created for the New York City Ballet, where he has advanced to soloist as well as resident choreographer. Some of its cheery tropes, such as the semaphoric hand manipulations, while well-used, have a well-worn air, abandoned as Peck’s expertise and abilities have well, increased. One critic calls Peck classical ballet’s “third greatest” choreographer of this century. I don’t know how he knows that, since it’s early on, but clearly Peck is terrific. He has risen by dint of extreme gifts and an intuitive and performance-driven sense of what looks great on dancers and what dancers enjoy doing.

They enjoy the sweat, then the privilege and acknowledgement of ability, as well as the buildup of anticipation via a buoyant opening solo, danced Friday by Amanda Assucuena. They take pleasure in stretching their schooled legs in stunning arabesques, in the languorous unfurling of slender, elongated arms — but also in the staccato drive of accelerated lunges, like speed skaters racing around an Olympic oval. Do they like performing in long johns? I don’t know, but Peck, credited with the minimalist costumes, probably does.

Grace Kim and Matthew Long, seated upstage, were the masterly grand pianists, and the effective lighting, by Mark Stanley, was recreated by Alexander V. Nichols.

Nicolas Blanc, trained in Europe and formerly of the San Francisco Ballet, created a lively pas de deux, Encounter (2015) for the Chicago-based Joffrey, where he’s the ballet master. Victoria Jaiani and Alberto Velazquez, who danced it Friday, were ideally suited to the Adams music, from his Saxophone Concerto. They knit themselves together, separating slowly, rushing onward, reuniting. Strikingly, Blanc emphasized an alliance between Adams and Igor Stravinsky and with him choreographer and dancer Vaslav Nijinsky, briefly quoting his angular hand positions from Afternoon of a Faun and urgencies from their Rite of Spring. With the Adams prompts, Blanc swiftly yet sometimes gently (as in a charming love duet) draws parallels between the early anxieties of existence in the 20th century and those we find in the 21st.

Alexander Ekman, who created Joy, is a choreographer of fine madness. One fondly hopes that his 2015 A Midsummer Night’s Dream, for the Royal Swedish Ballet, makes it to the States, specifically this one. In the meantime, there’s Joy, a short piece at once bubbling and baffling (that’s reflected in the recorded music medley), created on the Joffrey in a fast two weeks. How do you get to joy? Ask your dancers. Or at least that’s what Ekman says he did, and we must believe him: “It expresses the pure joy of creating in the moment.” Ekman did the costumes, lighting, and scenic design, which includes a little green tree upstage right and a turquoise-blue watering can for it wielded by Hansol Jeong. But the most important props are concealed in the flies: 29 pairs of beige high heels. You know where those are going. Soon everyone—men, women—has them on. You have to wonder, as the shoes bang onto the stage, how everyone gets a pair that fits. But they do. And you’ll stop worrying. Nobody onstage is worrying, not about anything.

Joy, preceded by a funny narrated preamble, starts in a neoclassical vein, as the company, in beige leotards, dances in powerful, accelerating, unison formations, women on pointe. But then, oh then … the women sit down, take off their shoes, rise, hold them up, strings dangling, and let them drop, toeblocks clattering, onto the stage. Freed from their restraints, their dancing becomes freer. Ekman has a strong and compelling streak of formality often overridden by his impulses, which makes his work so interesting, and yes, such great fun to watch.

The high heels, when they fall onto the stage from above, seem (only on reflection, when less giggling is going on) to imply both extreme restraint (guys, just try to walk in those puppies) and extremely entertaining transgression. A, it’s hard to dance in them, even for women, and B, it isn’t just hard, it’s ridiculous for men to dance in them. Yet dance they all do. Beautifully, in fact. I have striven to find meaning in the whole ballet and, beyond joy, failed mightily. I suspect that’s why Ekman in all his ambiguities is so compelling.

Annabelle Lopez Ochoa, whose Mammatus cloud-and-climate ballet, was a lovely end to the program, continues to surprise with the breadth of her explorations. Created for the Joffrey in 2015, it is perfect for a time of argument about climate change and man’s role in caring for the earth. It arrives on a breath of fog, clears into space for 20 dancers, then makes way for a trio and four duets. The dancers are humans, then avians, flying at each other or seeming to rise, arms and legs becoming wings and talons. Michael Gordon’s Weather One, for Strings was a fitting frame for the outstanding shifts of impulse and intensity, for the auras of flight and light, augmented by Dieuweke van Reij’s design. Particularly lovely highlights were from the trio of Valeriia Chaykina, Fernando Duarte and Graham Maverick, and a duet danced by Anais Bueno and the eloquent Fabrice Calmels.

Given the wonders of the Joffrey’s show, it’s a little painful to note that what were once categorized as “leotard ballets” seem to have become underwear ballets, and there were too many of them. A greater variety of (well-chosen) costume designs would be most welcome.

The welcome return visit of the Joffrey Ballet to Berkeley features a mixed bill, both moving and wondrous, and beautifully danced.

The ever-cutting edge company has a ball with new works by Ekman, Caniparoli, Welch, and Possokhov.

A Royal Flush from Justin Peck at the S.F. Ballet

Justin Peck's dazzling choreography, and Sufjan Stevens' now-classic score The BQE provide a winning hand In the Countenance of Kings.