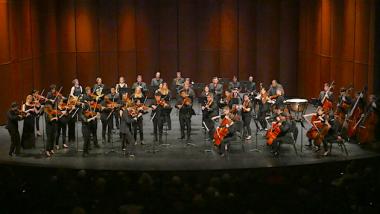 Kaleidoscope Chamber Orchestra presented a wide-ranging concert of works by Caroline Shaw, Prokofiev, and Beethoven on Saturday night at the Wallis Annenberg Center for the Performing Arts. The packed Beverly Hills audience thrilled at the sight of an orchestra performing without a conductor.

Kaleidoscope opened the evening with Shaw’s Entr’acte — a work inspired by Haydn’s String Quartet Op. 77, No. 2. The piece shifted between a classical motive and moments of extended technique, and Kaleidoscope delivered a deft performance. Originally composed for string quartet, the evening’s string orchestra version worked well in the hands of Kaleidoscope. It was an intimate beginning to an evening of strong playing.

In Entr’acte, players move their bows toward and away from them, as opposed to the conventional up and down motion. This created an airy effect in which the main sound was a brushing noise without specific pitch. The piece also prominently featured pizzicato — moments in which the players pluck rather than bow their strings. Kaleidoscope flaunted its ability to change mood instantly. It was as if 200 years were traversed within seconds. Of the three works on the program, Entr’acte best showcased the ensemble’s strong string playing. It also served as a modern counterweight to the evening’s other pieces.

Pianist Irene Kim delivered a percussive reading of Prokofiev’s Piano Concerto No. 3, rendered with powerful technique in both its slow and fast movements. This lent pleasing continuity to a work that often shifted in tone from moment to moment. Of the three pieces on the program, this was the most difficult to perform without a conductor, given the convoluted rhythms and layering between sections of the orchestra. Kim, for her all her power, spun a melodic line of wonderful clarity while allowing her instrument to blend well with the orchestra.

Kim played on a piano with a removed lid in order to improve sightlines, as violinist Benjamin Hoffman explained in a preconcert talk. At several times in the second movement, sections of the orchestra fell out of sync with one another but these moments were remedied by Kim’s confident playing.

The ensemble proved strongest in the piece’s third and final movement. Toward the end of the work, the strings carried a sweeping melody while the piano hammered out chords beneath it. If done incorrectly, either orchestra or piano will overpower the other. But Kaleidoscope and Kim reached a balance, reflecting Prokofiev’s score in which the parts are intended to work on an equal footing. This balance was impressive, given that the ensemble performs without a conductor. The wonderful acoustics of the Wallis’s Bram Goldsmith Theater also contributed to this.

Kaleidoscope ended the night with an up-tempo and aggressive account of Beethoven’s Symphony No. 5. The lack of a conductor lent a different feeling to this work. It forced the orchestra to listen to each other as if in a jazz ensemble, allowing the natural rhythms of the melodies to guide the playing. This created several moments of inconsistent tempo, most obvious during the second movement, but it also allowed Kaleidoscope to give a performance that tended toward the rhythmic flexibility of an improvisation. This was a welcome rendition for what is one of the most performed pieces in the repertory.

The majority of players in Kaleidoscope stood throughout the performance, which filled the symphony with a physicality not usually seen in orchestral performances of the classic symphonic works. The brass section played with a particular weight well-suited to the symphony’s celebratory finale.

If the evening lacked a programmatic consistency between the works, this hardly mattered. The rhythmic energy of the ensemble, electric at its best moments, provided the consistency.