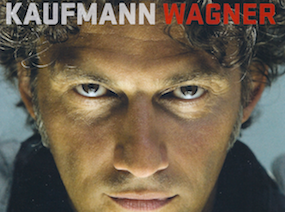 At last, with performances of Wagner’s Ring Cycle, Lohengrin, and Parsifal under his belt, tenor Jonas Kaufmann delivers his first all-Wagner CD recital. Recorded September 17–22, 2012, with the Orchester der Deutschen Oper Berlin, conducted by Donald Runnicles (former music director of the San Francisco Opera), Kaufmann offers further confirmation that he is indeed the longed-for Wagnerian hero of our generation.

Our hero may sing Romantic music from an era in which women were suffering maids and men their rescuers in shining armor, but he is not so attached to masculine trappings that he will not risk venturing into soprano/high mezzo territory when he hears the call. Hence, Kaufmann follows heroic excerpts from Die Walküre, Siegfried, Rienzi, Tannhäuser, Die Meistersinger von Nürnberg, and Lohengrin with the five Wesendonck-Lieder. Settings of texts by Mathilde Wesendonck, some of which served as studies for Tristan und Isolde, the songs have long been associated with the great Wagnerian sopranos of the 20th century. In fact, according to arkivmusic.com, the only Wagnerian tenor of merit who dared record them before now is René Kollo.

Listen to two versions of "Traume" from the Wesendonck-Lieder.

Kaufmann has nothing to worry about. In the face of naysayers who proclaim that singing too many heroic tenor roles will thicken if not wreck his gorgeous voice, he both lightens and sweetens to sing beautiful, deeply felt versions of the Wesendonck Songs. His performances of the two songs that call for the most “feminine” touch, “Der Engel” (The angel) and “Träume” (Dreams), are perhaps the most remarkable for their sensitivity. While Kaufmann’s rendition will never replace Eileen Farrell’s second recording of these songs (with Bernstein) or Lotte Lehmann’s incomparable early electrical performance of “Träume,” in part because the beat is less flexible, the singing is so gorgeous that it’s reason enough to buy the disc.

But who needs just one reason when every performance is a gem? Taking on the great heldentenor Lauritz Melchior, who in Die Walküre was known to hold Siegmund’s high-pitched cry, “Wälse! Wälse!” for impossible lengths, Kaufmann sings a Sword Monologue for the ages. If, in the end, recordings by the deceased heldentenor may inspire greater awe, recall that Melchior’s stage presence was virtually nonexistent, while Kaufmann’s is as believable as it gets.

Several residents of Bayreuth whom I spoke with last summer told me how much they preferred Klaus Florian Vogt’s sweet-voiced Lohengrin to Kaufmann’s. Yet, listening to Kaufmann’s Grail Narration, it’s hard to imagine a more convincingly mystical, otherworldly start to “In fernem Land” (In a far-off land). With Runnicles’ transparent support, Kaufmann sounds as if transported to a land of the holy and the wise. His performance — which comes complete with the original, less tuneful second verse that, in Kaufmann’s words, “explains an important part of the action” — is extraordinary.

Kaufmann offers further confirmation that he is indeed the longed-for Wagnerian hero of our generation. Then again, so are Kaufmann’s fervent Siegfried, who truly sounds naive; his sincere and prayerful Rienzi; and his angry, pain-filled Tannhäuser. The voice is as handsome as Kaufmann’s countenance, and equally seductive. The better the sound system, the more delicious he sounds. Do you need more adjectives to convince you to get this disc?