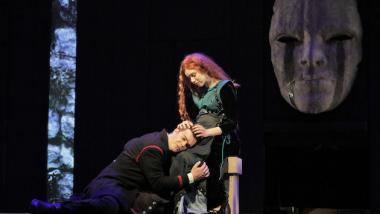 The first sound she made, in West Edge Opera’s Pelléas & Mélisande, was a desperate gasp. Thrusting herself out of a pool of water like someone who’d just nearly drowned, mezzo-soprano Kendra Broom stamped the haunted heroine of Debussy’s opera as an endangered survivor from the get-go.

Even as she entered married and maternal life with her baronial rescuer and husband, Golaud (baritone Efraín Solis), Broom’s vivid Mélisande remained tense, watchful, on the brink of peril. Yes, the raw vocal timbre of her opening scene gave way to something more gentle and domesticated, even murmurously submissive. And yes, she affected a certain obedient stillness. But like her flame-red hair, she went on burning toward some inevitable conflagration. And so it came, as the gravitational pull of the Maurice Maeterlink-based libretto commands, when Golaud’s half brother, Pelléas (tenor David Blalock), wandered into Mélisande’s simmering inferno.

The production, which opened Aug. 4 at a former auto assembly plant in the Richmond marina, took no overt feminist slant. Alina Bokovikova’s dark-hued costumes, in Keturah Stickann’s somber staging, had a medieval heaviness and severity. The stark black set (Chad Owens) broken by slat-shaped projections (Jeremy Knight) of forest and sea and sky placed us in timeless nature and nowhere contemporary.

But this Pelléas & Mélisande kept seeming eerily contemporary, whether it was the heightened power dynamic of one woman struggling to find her place in a male-dominated world, the painful enlistment of a child (Erin Enriquez on opening night) into adult psychosexual business, or the homeless peasants sleeping outdoors. The industrial setting, a watermark of the peripatetic West Edge troupe, felt entirely apt. Additional performances at the Craneway Conference Center are slated for Aug. 12 and 17.

Broom, in a musically compelling and psychologically nuanced performance, pulled off something remarkable. She made victimhood feel like a potent force. Her singing ranged from ravishing affirmations to private, interior musings on her unhappiness to a clear-eyed confession to her beloved Pelléas that she lies only to her husband. The effect of her prompt acknowledgment of marital deceit drew a knowing laugh from the audience: Paradoxically, it made the heroine seem more truthful.

No matter what, Broom conveyed an inner strength and integrity. It was there when she endured the creepy ministrations of her grandfather, Arkel (bass-baritone Philip Skinner, a firm-voiced and dominant patriarch). It was there in the awful scene of her enraged husband dragging her across the stage by her hair (disturbingly staged and rendered with a reckless rage and ferocious voice by Solis).

Even in her mounting love duet with Pelléas, the listener could hear and feel this Mélisande standing back and observing what had happened to her in all these arbitrary accidents of fate. Pregnant with the child she would bear just before her death, she gripped her midsection with a fierce sense of propriety. Her brave, doomed struggle, as Broom so convincingly embodied it in singing and action, was to take possession of her own being.

The men, perhaps inevitably in the glare of such a performance, felt slightly shadowy and eclipsed. Blalock took a middling road as Pelléas, leaving both the ardor and innocence of the character underdeveloped. His voice, like his acting, was graceful, smooth and frictionless to a fault. Solis found a wider range, from the tentative warmth of his first scene with Mélisande to his storms of jealousy and self-doubt. But he had a tendency to open out toward the audience too often, disengaging him from the action onstage.

Debussy’s intricate, febrile orchestral score is the ocean beneath the characters’ shifting and often submerged feelings and motivations. Making the washes and sudden sprays of sound and delicately colored textures cohere is a demanding challenge. It was met here, with a reduced orchestra under Jonathan Khuner’s baton, unevenly. While some passages came off with shimmering colors, an overall momentum of surges and retreats, crests and calms didn’t take hold.

Pelléas & Mélisande was a brave and daring undertaking for this small, intrepid company. At once powerful and fragile, emotionally loaded and occasionally static, the opera calls for a sophisticated blend of assets. Many of them came across here, while others fell short. None registered more memorably than Broom as a young woman swimming as hard as she could against a tide destined to sweep her away.