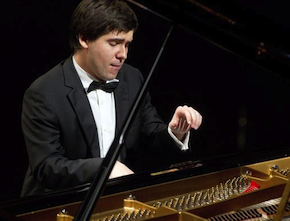 A long-expected Bay Area debut of last year’s Cliburn Competition winner, Vadym Kholodenko, took place Saturday at De Anza College’s Visual and Performing Arts Center in Cupertino. The Steinway Society originally scheduled the pianist’s concert for last September, but he fell ill and was forced to cancel. Now local music connoisseurs could finally hear Kholodenko, and the concert was certainly worth the wait.

The 400-hundred-seat hall was full, and the audience eagerly anticipated hearing a new piano star. The only fly in the ointment was the parking woes. Although there were enough parking spaces available, the parking vending machines at the venue are scarce, and the concertgoers had to stand in long lines, worrying if they would be able to get into the hall in time to hear the opening notes of the program.

Thankfully, the concert was preceded by a touching video tribute to Van Cliburn (who died last February), the legendary winner of the First Tchaikovsky Competition, who was proclaimed by Time magazine as “The Texan Who Conquered Russia.” After the video, Vadym Kholodenko was announced as “The Russian Who Conquered Texas.” Which Kholodenko immediately amended, deadpan, “Actually, Ukrainian, but …”

The 27-year-old has just completed his graduate program at the Moscow Conservatory, where he studied with Vera Gornostayeva, a student of the eminent Russian pianist Heinrich Neuhaus. Now Kholodenko is working as her assistant. Both Neuhaus’ and Gornostayeva’s insistence on probing the musical depths of a piece, revealing its inner poetry and structural beauty, was fully evident in Kholodenko’s playing. He is an insightful, poetic, and mature artist with seemingly unlimited technical capabilities.

He is an insightful, poetic, and mature artist with seemingly unlimited technical capabilities.

The high points of Kholodenko’s performance were quite stunning, and even its low points were still excellent. The first high point was a cycle of eight pieces, titled Forgotten Melodies, Op. 38, by Nikolai Medtner (1880–1951): Sonata-Reminiscenza, Danza graziosa, Danza festiva, Canzona fluviala, Danza rustica, Canzona serenata, Danza silvestra, and Alla Reminiscenza. The opening piece, Sonata-Reminiscenza, can be heard fairly frequently, but the rest of the set is seldom played, especially in its entirety. (For some unfathomable reason, the program notes insisted that the entire Op. 38 was a sonata containing eight pieces.)

Brahms’ youthful Four Ballades, Op. 10, are not his finest creations, to begin with. And, following the spellbinding wonders of Forgotten Melodies, the Four (!) Ballades, though nicely played, seemed droning and contrived. In my view, Kholodenko should either place the Ballades next to something else or perhaps consider dropping them altogether.

A group of Chopin’s Mazurkas, played after intermission, was thoughtfully conceived and eloquently rendered, yet Kholodenko’s approach was, at times, overly cautious. There was not enough abandon in the opening B-major Mazurka, Op. 63, No. 1, and the offbeat accents in two A-flat major Mazurkas, Op. 41, No. 4, and Op. 50, No. 2, were too tame.

Chopin’s Scherzo No. 4 in E Major, Op. 54, was the beginning of the second high point of the concert. Kholodenko’s scintillating technique is marked by superior refinement. Many pianists can dazzle with their finger velocity, but few can rival Kholodenko in producing such alluring atmospheric effects in exceptionally fast passages.

The steadily culminating finale of the program, Rachmaninov’s piano transcriptions of Fritz Kreisler’s Liebesleid and Liebesfreud, was phenomenal. Kholodenko delivered both pieces with such inimitable flair and breathtaking pianistic wizardry that he apparently decided not to follow these gems with an encore. It was either this, or the fact that he had to catch a night plane to Portland to play a concert there the next day.