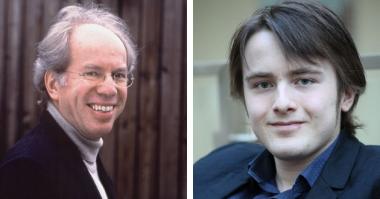 Remarkable things are bound to happen when two brilliant musicians combine their unique musical talents — and many remarkable things indeed did happen last Tuesday evening during the performance that Latvian violinist Gidon Kremer and Russian pianist Daniil Trifonov gave as part of the Koret Recital Series at Cal Performances.

In their collaboration, Kremer and Trifonov showed a range of expression and depth of musical vision that are the manifestation of musicianship at its finest.

But audience members who were hoping for a warm and fuzzy experience had to wait until the very end of the recital, when Kremer and Trifonov played Schubert’s Fantasy for Violin and Piano in C major, D. 934.

The temperature inside First Congregational Church of Berkeley didn’t help, and neither did the program’s inclusion of two pieces by one of Kremer’s favorites, Polish-Russian composer Mieczysław Weinberg (1919-1996): Sonata No. 5 for Violin and Piano in G minor, Op. 53 (1953); and the Sonata for Solo Violin No. 3, Op. 126 (1978).

Until recently, Weinberg was virtually unknown outside the former USSR. Some critics consider him the third great Soviet composer, in the company of Prokofiev and Shostakovich.

Last February, Gidon Kremer and his Kremerata Baltica visited San Francisco to perform two of Weinberg’s orchestral compositions. In my review of the concert, I concluded that Weinberg’s music is very demanding — in the literal sense: It insists that you pay attention.

Both of Weinberg’s violin sonatas from Tuesday’s concert confirmed that assessment. The 1953 sonata for violin and piano is easier on the ears than the solo violin sonata from 70-plus opus numbers later, but Weinberg’s musical language is generally very stark and austere, and sometimes off-putting.

There were some lyrical moments, — most of them in the 1953 sonata, at the end of the first movement, for example, when the composer draws intriguing, glacial vistas with nothing more than a few, repeating piano chords and a thin, hovering melody in the violin that barely changes focus and direction. This soon makes way for violent eruptions in the piano, accented by loud shrieks in the violin and an ending full of dramatic mood swings.

The solo violin sonata from 1978 is, on the surface, a considerable challenge for the listener, yet impressive because of its impact. Heavily dissonant, relentlessly in-your-face, intense, loud, sometimes brutal — then suddenly ethereal, fragile, and wispy, the composition has an elusive kind of beauty.

Similarly, the two Mozart compositions on the program brought focus to the wonderful tone that Daniil Trifonov coaxes from his instrument. In his Cal Performances debut, Trifonov opened solo with the D Minor Fantasia, K. 397, and later in the program, performed the Violin Sonata in E-flat major, K. 481, together with Kremer.

In spite of Trifonov’s beautiful tone and Kremer’s impeccable command of his instrument and the musical material itself, both pieces were treated with a certain distance and detachment. Not emotionless, but emotionally neutral, rather.

It wasn’t until the Schubert Fantasy at the end of the program that Kremer and Trifonov took themselves and the music a bit less seriously, turned on the charm, and had some real fun. The music cascaded in a lovely way. The ensemble playing was faultless and inspired.

Then to top it off, the masterful duo played a comedic little piece that Georgian composer Giya Kancheli once presented to Kremer as a gift.

A little warmth and fuzziness after all…