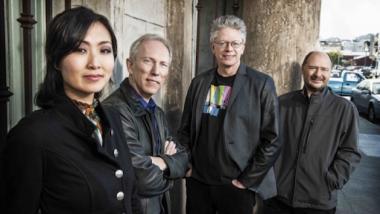 At Zellerbach Hall on Saturday, the improbable architecture of Kronos Quartet was thrilling. Presented Dec. 3 by Cal Performances, the San Francisco-based string ensemble pitched a multihued mosaic of uplifting music against a sound wall of pain and anchored the two-sided A-frame they had constructed in prismatic classicism.

Fifty for the Future in the program’s first half brought three short works that are part of the ensemble’s commissioning and education initiative that was launched in 2015 and will eventually provide 50 new string quartet arrangements for the Kronos Learning Repertoire. Premiered by Kronos and entering their repertoire of over 900 original works, the Fifty for the Future pieces are designed to train string-quartet students and emerging professionals. In one of the evening’s lighter moments, Kronos founder and violinist David Harrington urged people to go home, access the free online training guides, and “learn to play them yourself.”

The program’s selections included Satellites, a feather-light, dancing bows third movement from Garth Knox’s Dimensions; Aleksandra Vrebalov’s surging, intense My Desert, My Rose; and the world premiere of Anna Meredith’s muscular, barrage-like Tuggemo. Viewed as an indication of the future, the three composers offered promise and the evening’s easiest access to understanding why contemporary classical music lovers might rejoice. Innovative bowing techniques, distinctly individual expression, challenging physicality, in some cases judicious use of electronic and synthesized layering, and compositions that demanded nuanced performances and deep listening within the quartet ... there seemed to be no limit to the possibilities.

Grounding the new commissions, Reena Esmail’s arrangement of N. Rajam’s Dadra in Raga Bhairavi, offered a semiclassical Hindustani work with an underwater quality that had Harrington’s violin sounding like the humming of a woman far in the distance. Cellist Sunny Yang brought the piece ashore, her fingers thrumming against the cello’s body to replicate strokes taken on the tabla, an Indian percussion instrument. John Sherba, violin, and Hank Dutt, viola, together issued passages that wove within the textures and bundled, then disperse notes like sonic diaspora.

Placed in the unusual position of chief marshal in charge of a parade of young rebels, Philip Glass’ String Quartet No. 7 reminded the listener of Kronos’ connection to Haydn, Mozart, Beethoven, Schubert, and the 18th-century string quartet. Written for Kronos in 2014, the work’s graceful transitions, all-for-one and one-for-all atmosphere — although meticulously played and sophisticated in structure — felt oddly quaint and less consequential, in light of the powerful, energized work that preceded it. If anything on the program suffered from juxtaposition, it was Glass’ work.

The same was true — but far less so — of Jacob Garchik’s arrangement of Abel Meeropol’s song, “Strange Fruit.” The 1939 version made famous by Billie Holiday included lyrics, in part: “Southern trees bear a strange fruit,/Blood on the leaves and blood at the root,/Black bodies swinging in the southern breeze,/Strange fruit hanging from the poplar trees.” Matching the potency of Meeropol’s antilynching poem-turned-song with instruments alone proved to be a near miss. Garchik captured the bluesy, mellifluous gloom of “Strange Fruit,” but lacked the inescapable sting of the song’s urgent warning and indictment.

The Bay Area premiere of Mary Kouyoumdjian’s Silent Cranes, a commemoration of the Armenian genocide built on Armenian folk songs concluded the program. It could easily have overwhelmed or erased any memory of all that came before. It’s a tribute to Kronos’ superior playing that it did not. Even so, the four-movement work came packed with visual and auditory punch from projection designer Laurie Olinder; lighting design by Brian Mohr; poetry by David Barsamian, with excerpts from a poem whose central message was to never forget the tragic massacre.

The historical photographs, graphics and verbal accounts of the mass extermination of 1.5 million Armenians by the Ottoman Turks that began in 1915 and is, over 100 years later, still not acknowledged by Turkey, were horrific. Most stunning were the haunted gaze of eyes in countless photographs and a map over which blood drops were laid, highlighting the regions where the killing fields took the lives of Armenians, including some of Kouyoumdjian’s ancestors.

Shimmering, surging, fluttering as if made of porcelain and on the verge of shattering, at times building to what equaled crowd-like screams or multiple voices overlapping and jumbled in their urgency to be heard — Kronos was like four musicians who had suddenly, impossibly, become an entire orchestra. Should a work whose central story is so horrific be so gorgeous? We don’t know, but it was.

Of course, how a piece of music that has built such a tower reaches resolution is critical. “Dismantling” could be implosion, unresolved abandonment, or a kind of secular liturgy. It seemed the composer chose the latter. A female survivor’s voice said, “I was young, but I still remember it,” which led to a story about a father during the Armenian holocaust pointing out a constellation in the night sky and equating his daughter to its brightest star. Making oneself heard, unlike the bird in the Armenian folk song, “Groung” (Crane), that flies silently away, is left to the living, to people like the young girl who became the woman who makes her voice heard. Kouyoumdjian, with Kronos, has made the stories of people who can no longer speak, impossible to forget.