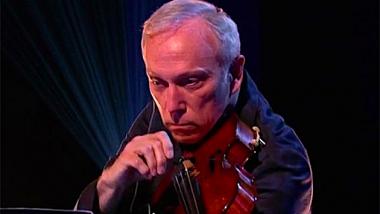 Amid holiday decorations, a single gold star hung from the high ceiling. It did seem Saturday evening (Dec. 13) that the center of the universe — for violists, anyway — was in a church in San Francisco. That same night in Lincoln Center’s Alice Tully Hall, the Juilliard Orchestra performed John Harbison’s Concerto for Viola and Orchestra, the composer’s best-known piece for the instrument. But Harbison, a Pulitzer Prize and MacArthur genius grant recipient — and self-described former “violist of a sort” — chose to be at San Francisco’s Old First Church that evening.

Presented by Old First Concerts, it was a rare and intriguing solo performance by Hank Dutt, Kronos Quartet’s violist. A draw was the West Coast premiere of Harbison’s Sonata for Viola and Piano, a work written in 2018. An esteemed lineup of violists has performed it since. Sally Chisholm, for whom it was written, was in the audience.

Speaking in a preconcert chat, Harbison explained viola is an instrument he “spends a lot of time thinking about.” Harbison, just a week shy of his 81st birthday, mused that the sonata is also an example of how his work has evolved to be more compact and concise — much different from decades past. “I’m trying to summarize more these days.”

Another intriguing tidbit was Harbison’s observation that violas share the same register with some long-beloved jazz singers, namely Rosemary Clooney — whom Dutt also admires. Harbison recalled memories of watching Clooney and Thelonious Monk perform. “I think every singer that you listen to does shape a composer’s idea of how you write melody and how you phrase it,” Harbison said. He also evoked the thrill of jazz. “There’s something very physically enveloping about playing jazz.”

These two ideas — of honed phrasings and of music as an immersive experience — applied well to Dutt, the Kronos violist for more than four decades. Dutt, who played a few works with the spirited and absorbing pianist Hadley McCarroll, inhabited each to a transporting effect. Dutt has a way of imbuing even the microscopic gradations of a phrase with character, and the program supported his deft interpretative skills. And, on the verge of a new decade, it also felt like an idealized presentation of what chamber concerts should be: a balanced representation of voices. There was a world premiere of the version for viola of Dutch-Polish composer Hanna Kulenty’s a fourth circle (originally written for cello); Serbian-American Aleksandra Vrebalov’s spell no. 7; Philip Glass’s The Panther; Toru Takemitsu’s A Bird Came Down the Walk; Meredith Monk’s Gotham Lullaby; and Leonid Desyatnikov’s Wie der alte Leirmann... (Like the old organ grinder).

For Harbison, the audience’s experience of the music is also important. The sonata comprises six succinct movements that grow progressively shorter. “A general ambiguity of character for me is more interesting than being able to describe effectively what you hear,” Harbison explained. It created an engrossing journey. Jazz ideas bubbled up in the third movement, “Night Piece,” a coy section built on a pun. In the fourth movement, “Certainties, Uncertainties,” Dutt’s melodic line sounded clear and declaratory against, appropriately, the piano’s uncertain utterings. When viola and piano lines synchronized, the sound was full and lush.

Much of the repertoire had Dutt climbing the viola’s higher register, rendering moments when he’d dip low, yielding fruity, tannic tones, especially satisfying. In spell no. 7, inspired by Bach’s Cello Suite No. 5, Dutt steered the work’s constant flux between the Baroque suite, those familiar phrases touched by dulcet vibrato, and unusual timbres via extended technique. At some points, Dutt produced ovular bow strokes toward and away from the bridge and fingerboard, creating beguiling rustling. It all gave the impression of Bach being teased and carded like wool.

Enchanting shaping and fine attention to detail, especially in his bow arm, ruled Dutt’s performance. This was apparent in Kulenty’s mysterious and propulsive a fourth circle, which opened the evening. In Meredith Monk’s Gotham Lullaby, originally written for voice, Dutt mimicked the voice superbly, in nuanced phrasing.

Dutt and McCarroll were careful stewards of the evening’s often theatrical sound journeys, although Dutt himself remained calm in his body language, save for slight rocking that added floorboard creaks into the soundscape.

The Kronos Quartet’s longtime violist reflects on his decades with that distinguished quartet, and on its 40th anniversary performance Sunday in Berkeley.

A great American composer shows his variety in a well-balanced, entertaining performance at chamber/text, the free concert series.