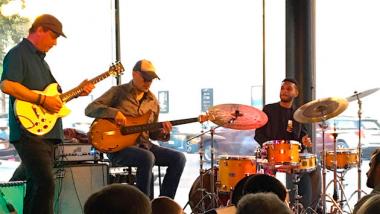 Kurt Rosenwinkel Sets a High Bar With the Standards Trio

About one minute into guitarist Kurt Rosenwinkel’s performance Friday night at the SFJAZZ Center’s Joe Henderson Lab I remembered all over again why I love second sets so much. As Italian electric bassist Dario Deidda introduced a post-bop anthem and Rosenwinkel and drummer Mark Whitfield Jr. sprang into the arpeggiated theme, they evoked the distinct sensation of walking into the middle of an impassioned conversation.

Technically it was the evening’s late show, as the JHL tends to offer two, concise 60-minute performances a night with separate admissions. But with their headlong energy the musicians hit the stage with raring-to-go, second set intensity, playing with the kind of focus and cohesion that rewards music fans who don’t mind staying out past 9 p.m.

Among the most influential guitarists of his generation, the 48-year-old Rosenwinkel doesn’t make it out to the West Coast often. For the past 12 years he’s been based in Germany, where he holds down a full-time teaching position at the Jazz Institute Berlin.

Known as a composer who combines ethereal melodies with a harmonic vocabulary inspired by maestros of mystery Wayne Shorter and Joe Henderson, Rosenwinkel has spent much of his time collaborating with their leading heirs, particularly tenor saxophonists Mark Turner and Joshua Redman (both former members of the SFJAZZ Collective).

His JHL engagement offered a very different view of the guitarist. Rather than focusing on his original compositions, he’s touring with his Standards Trio, an ensemble with a treasure-laden repertoire featuring American Songbook standards and canonical jazz tunes by the likes of Joe Henderson, Thelonious Monk, and Horace Silver.

Rosenwinkel possesses a bright, quicksilver tone that he pours into songs, often doubling his guitar line with a harmonized vocal hum. On the set’s centerpiece, an effectively reharmonized arrangement of “You’ve Changed,” the trio maintained the melody’s form while bending it in all kinds of new shapes.

The set’s high point was an extended version of Silver’s classic “Nica’s Dream,” taken at a brisk tempo. Digging into the Latin feel of the opening section, the trio highlighted the contrasting rhythmic feel of the different sections, adding a dose of drama to an already arresting piece.

The revelation of the evening was Whitfield, a highly melodic drummer who never played a cliched pattern. Given that he’s the son of esteemed jazz guitarist Mark Whitfield and nephew of ace jazz drummer Troy Davis, he didn’t come out of nowhere. But his control of dynamics, appealing textural palette and relaxed but coiled feel evidenced musical wisdom well beyond his 28 years.

Rosenwinkel seemed to revel in the conversational give and take with Whitfield and Deidda, which made the trio’s performance anything but standard.

The Beninese jazz guitarist and his transnational cohort feed off each other at Yoshi's.