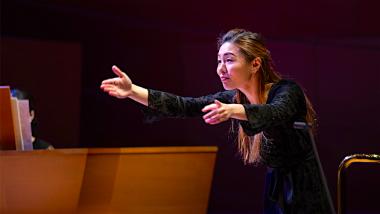 On an ironically sunny St. Patrick’s Day, Jenny Wong, the talented young (born 1987) associate conductor of the Los Angeles Master Chorale, chose grief as the topic of her annual Chorale showcase at Walt Disney Concert Hall. Or rather, it was about dealing with grief — first via the compassionate consolations of Maurice Duruflé’s Requiem and then through gradual healing in the face of doubts and pain in Dale Trumbore’s a cappella “secular requiem,” How to Go On (2016).

Set to poems by Barbara Crooker, Amy Fleury, and Laura Foley, there is an element of indeterminacy about the way Trumbore’s piece is constructed. She encourages conductors to mix up the order of the movements at will (which Wong did), as long as they designate “When at Last” as the concluding movement. That makes musical and topical sense since Fleury’s “When at Last” — a wish for a gravesite that encourages life to go on — concludes simply with humming on two alternating chords, followed by the ensemble quietly inhaling and exhaling several times.

So no performance of How To Go On can be considered definitive. In Wong’s sequence, which lasted about 40 minutes, the piece begins in the most striking fashion. The words “How can we go on?” are repeated and repeated by the choir, with unnerving sliding pitches adding a feeling of unease, of matters slipping out of the control of the grieving listener exactly as I suspect was intended. The complete text of Crocker’s brief poem, “How can we go on, knowing the end of the story?” recurs in spots throughout the work; at one point, the female voices wail and drift over the male voices. “Let go of your friends; we’ll cry but we will not forget you,” says another poem set to luxurious harmonies. At other times, the textures are as thin as can be.

Just as there is no definitive performance of this work, the piece offers no definitive answers as to how long it will take and what will it take to get through the stages of grief, although Trumbore said at the preconcert talk that writing the piece offered her some consolation. But for real consolation, we turn to the Duruflé Requiem (in the version for organ, cello, and choir), which was a favorite of the Master Chorale’s founding music director Roger Wagner and a successor Paul Salamunovich, but not performed by the group since Salamunovich led it in 2005.

Completed in 1947, Duruflé’s Requiem was clearly out of sympathy with the direction the international avant-garde was taking after World War II, building upon Gregorian chants instead of twelve-tone rows, offering solace instead of abstract denial of emotion after a terrible war. Duruflé essentially begins where the Fauré Requiem leaves off; you can almost connect the idyllic strains of Fauré’s concluding “In Paradisum” with Duruflé’s “Introit” without a break (allowing for a change of key, etc.).

Occasionally, when storms of anguish and fear erupted — particularly in the “Libera Me” — the volume level of these forces cranked up to a near-shattering level. But mostly, the feeling was one of peaceful resolution of grief that would be thrown into some doubt by Trumbore’s work after intermission. For what it’s worth, Wong conducted the entire program from memory — a graceful feat of musicianship.

Shawn Kirchner’s Songs of Ascent provides a powerful contrast with the Mozart Requiem.