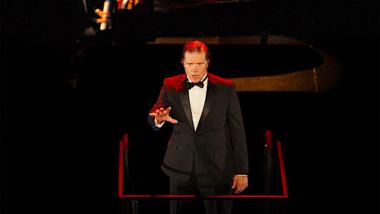 Rod Gilfry, dressed elegantly in a tuxedo, seemed to hover like a disembodied spirit within the dark, cavernous interior of the Theatre at Ace Hotel — a former ornate movie palace where Los Angeles Opera presented the West Coast premiere of David Lang’s existential monologue opera, the loser.

Adapted, composed, and directed by Lang from the 1983 novel, Der Untergeher, by Thomas Bernhard, the loser unfolds as a mesmerizing stream-of-consciousness monologue. A single nameless character, an aspiring piano virtuoso played by Gilfry, relates a tale of artistic crisis brought about by a fictional master class with Vladimir Horowitz. It is during this class that he and a fellow student, Wertheimer, encounter the genius of Glenn Gould, who represents a level of performance they can never attain. It’s the same crisis that motivates Antonio Salieri to seek his “revenge of mediocrity” in Peter Shaffer’s Amadeus.

From the moment the audience entered the theater on Saturday there was a sense that something was disconcertingly off-kilter. Rather than being directed to the main auditorium, we were told to make our way upstairs to the theater’s vast balcony. From there the stage seemed miles away. Why would they do that? Was it meant to represent some sort of existential chasm? Then the hall went dark.

As the lights came up Gilfry didn’t so much enter as materialize standing still as a statue atop an elevated platform just beyond the edge of the balcony. The impact of this apparition was tangible, almost magical, and totally unexpected. Then, using the full range of his sonorous baritone voice, Gilfry began a marathon monologue composed combining lyrical phrases from the bottom to the top of his range, with a unique form of speech-song (Sprechgesang).

The musical accompaniment was provided by a quartet of amplified musicians, members of the New York collective Bang on a Can: cellist Mariel Roberts, violist Isabel Hagen, double bassist Pat Swoboda, and percussionist Owen Weaver. A fifth member of the ensemble is an onstage pianist, Conrad Tao, who until the last moments of the opera remains in shadow.

In the novel, the narrative is written in the form of a continuous monologue with no paragraph indentations, numerous run-on sentences, obsessive repetitions, and disconcerting leaps from one verb tense to another.

Lang’s libretto (adapted from the English translation by Jack Dawson) maintains the novel’s sense of ebbing and flowing, halting and repeating. “Even Glenn Gould, our friend and the most important piano virtuoso of the century, only made it to the age of 51,” the narrator begins. But it is the suicide and funeral of the third member of the group, Wertheimer (the “loser” referred to in the title) that has provoked these ruminations.

At times the narrator’s tale tumbles out in a torrential flow, while his body remains as stiff and immobilized as a statue. At other times, like a record player stuck in a groove, he repeats himself, as does Lang’s pointedly spare score, with its paired strings, overlaid marimba, and drums. The music and Gilfry’s voice, however, are never in synch, as if the narrator is tonally at odds with his own story, which is by turns, disturbing, perplexing and inexplicable. Like Salieri, he ponders why God would play such a cruel trick on him and his friend, leaving them, like Tantalus, to know the fruit of genius will forever be beyond their grasp.

Lang’s compositional and directorial style, as in the plays of Samuel Beckett, makes silence as significant as sound. Every moment is controlled to the point that a simple nod of Gilfry’s head, a smirk, the raising of an arm or change in vocal intonation takes on immense significance. The same defining principal is applied to the score, which illuminates and punctuates the narrative.

“I laughed at my piano-virtuoso career, which went up in smoke in a single moment,” Gilfry relates, adding, “Wertheimer was always slower, never as decisive in his decisions as I, he tossed his piano virtuosity in the garbage can years after me, and unlike me, he never got over it.”

His “cure” he says, in a moment of pure artistic masochism, was to give away his precious Steinway to a young talentless student knowing that it would quickly be destroyed.

As the opera unfolds, the separation of the eight scenes is indicated by pauses in the narrative and subtle changes to the color of lighting (by Jennifer Tipton). In a similar way, Lang varies the musical textures and instrumentation to illustrate the narrator’s stories and psychological mood swings. In the end, only the solo piano remains — a ghost of concerts past playing a distorted version of the Goldberg Variations.

While every aspect of Lang’s creation is fascinating, it is the unrelenting presence and vocal clarity of Gilfry’s performance that makes the loser such a remarkable operatic experience. He and Lang bring new meaning to the old axiom that less can be so much more.

He just plays one in David Lang’s opera.