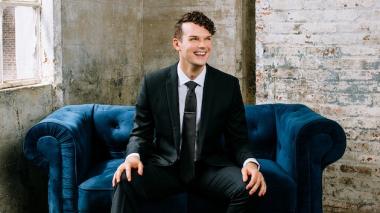 A Lad’s Love and More From Brian Giebler

Right off the bat, there are a few things to say about this wonderful recording. The first is that the beauty, sweetness, and youthful sheen of Brian Giebler’s extremely fine tenor is ideally suited for this collection of English songs by Ivor Gurney, Benjamin Britten, Peter Warlock, Roger Quilter, John Ireland, and the very much alive Ian Venables. I’m not certain that every native-born Englishman would give Giebler’s accent a free pass, but to this Yankee, that’s of little consequence. Far more important is Giebler’s innate sincerity, which is so intelligently allied with his choir boy-like tonal clarity that it unfailingly brings the beauty and meaning of his chosen songs and lyrics to the fore, 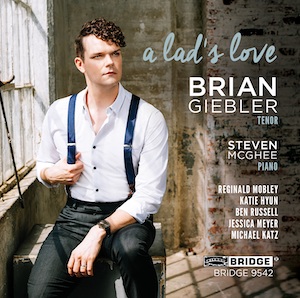 The second is to note the coy, semicloseted way in which this recording presents its raison d’être. Giebler, in explaining the idea behind the album, writes that A Lad’s Love (Bridge) is a collection of English poetry and songs of the early 20th century that “tell stories of loss or unrequited love, [some of which are] bolder, more self-assured statements of desire. [They are] unified by the depth of feeling expressed by the lover, not by the gender of the object of his affection, which is conspicuously absent from any of the texts. Loss is at the center of these songs, whether due to death, societal standards, unrequited love, the passage of time, or inaction.”

While that is certainly the case, what is all but said, both by Giebler and his accompanist/liner-notes writer Steven McGhee, is that the “love that dare not speak its name”— the love between two men — is what this album is all about. If virtually every song deals with loss or separation, that’s in no small part a reflection of the oppression that homosexual composers and poets experienced in England at the time the songs were written.

Virtually all 22 of the songs on A Lad’s Love have a homosexual connection. Alfred Edward Housman, seven of whose poems from A Shropshire Lad appear in Gurney’s cycle Ludlow and Teme (1923) — another Housman poem serves as the basis for the gay Venables’s “Because I liked you better” — was homosexual. Once you know that, the subtext of Housman’s poems about love and loss becomes clear.

W.H. Auden, whose poems provided the basis for many compositions by his very gay friend, Britten, was also homosexual. Ditto for Quilter and most probably Ireland (whose settings of Housman’s verse appear on this recording). Warlock (Philip Arnold Heseltine) may not have been gay, but he certainly bucked social norms during the 36 years before his presumed suicide by asphyxiation.

The third thing to say is that rather than print lyrics, Bridge saves money by including URLs. Unfortunately, they’re not listed in the Table of Contents, but rather in the five pages of liner notes that follow. If you really want to experience all this recording has to offer, have your iPad handy, and prepare to hit “pause” multiple times while a huntin’ and a searchin’ ye dost go.

Giebler gives his considerable all to the recording’s centerpiece, Britten’s almost 17-minute Canticle II, Abraham & Isaac Op. 51 (1952). Ideally abetted and balanced by countertenor Reginald Mobley, whose Isaac sounds so sweet, innocent, desperately fearful, and trusting that you could cry, Giebler imbues Abraham with convincing passion. His swell from piano to forte is seamless, and the performance so convincing that you’d think Britten wrote Canticle II for him and Mobley rather than his partner, Peter Pears, and Kathleen Ferrier.

Other highlights include the winning freshness of Warlock’s “In an Arbour Green” (1922) and the beauty of Venables’s “Because I liked you better” (2004). Giebler’s rendition of Quilter’s “Love’s Philosophy” (1905) is almost as winning as soprano Arleen Auger’s, save for the all-important exultant high ending, where his voice sounds a mite pinched as it momentarily loses its youthful glow. Then again, Auger’s memorable performance (on her Delos recital, Love Songs) gives no hint of the song’s homosexual subtext. No reservations, however, about the final high note and diminuendo in Britten’s “The sun shines down,” from Fish in the unruffled lakes (1937–1941), which are superb.

Ultimately, A Lad’s Love is a collection of beautifully sung English songs that explore the love and loss at the core of the human experience. Like all great art, the meaning and beauty of songs and lyrics are universal. Highly recommended.

Sulayman possesses a gorgeous voice, and his interpretations are balm for the soul.