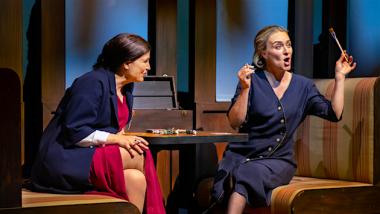 Today It Rains marks the third operatic collaboration between composer Laura Kaminsky and co-librettists Kimberly Reed and Mark Campbell. Their 2014 As One — Kaminsky’s first operatic endeavor — was a breakout success. It’s been mounted a record two-dozen times, including a recent staging at Portland Opera, and a future recording and touring production are in the works. This intimate character study of a transgender woman’s experiences, told by a male and female soloist who represent her pre- and post-transition selves, has clearly resonated with audiences.

The creative team’s latest project also explores themes of marginalization, personal struggle, and self-fulfillment, this time through the historical individual of Georgia O’Keeffe (1887 – 1986). Today It Rains, which I saw Saturday in its world-premiere production at San Francisco’s industrial-chic Z Space, follows the painter on her legendary maiden train voyage to New Mexico in 1929, where she would produce her iconic images of blood-red mesas and buzzard-picked skulls.

I’m usually wary of these kinds of artist “bio-operas” — it’s hard to theatricalize, let alone musicalize, the rather mundane labor of composing, writing, or painting. The usual alternative is to play up the inner complexities and tumultuous love affairs of a Great Genius, as in Amadeus or Immortal Beloved. Reed and Campbell took this route in their text, confining O’Keeffe to a train car where she could reflect on her life left behind in New York.

There’s no doubt that the librettists did extensive research into the painter’s life, yet their homework doesn’t really show. They left out the defining details that make O’Keeffe unique, reducing her to a stock “tortured artiste” figure. Her central conflict was some vague lack of inspiration brought on by “too much noise” and “too much green” at her Lake George retreat (though this certainly doesn’t show in her placid, multihued canvases of that period). Likewise, the glimpses of her marriage to photographer and art dealer Alfred Stieglitz gave only the most general impression of their rocky relationship, which unfolded according to clichéd, soap-opera tropes. In the couple’s scenes together, which took place in O’Keeffe’s memories and dreams, it felt as if we were watching any classic operatic “farewell” duet, but without the expositional context of previous acts.

We only approached the “authentic” Georgia in moments she shared with her travelling companion and confidante Rebecca “Beck” James, whose own paintings of flowers and seashells resembled those of O’Keeffe. In their playful banter (which occasionally bordered on laugh-track one-liner territory), they poked fun at critics who invariably interpreted their art through a gendered lens. “Our brushstrokes aren’t drawn by our vaginas,” remarked Beck. “A pistil is sometimes just a pistil,” Georgia responded, paraphrasing Freud.

But even if we were told that O’Keeffe was more than a “woman artist” — a pigeonholing label she abhorred in real life — there’s never a point where she articulated her actual artistic credo. Granted, she’s still figuring that out over the course of the literal and metaphorical journey depicted in the opera. But ironically, in a work about a painter’s search for self-actualization, we’re left with a picture of who she wasn’t, not who she was.

Rather than O’Keeffe, the real heroine of the evening was composer Laura Kaminsky. Her writing for the eleven-piece instrumental ensemble was nothing short of masterful. She’s achieved a fluidity of pacing that is so idiomatically theatrical that it’s hard to believe she’s a relative newcomer to opera. Kaminsky’s contrapuntal writing is particularly strong — her ability to juggle several simultaneous lines is reminiscent of the textural clarity in Schoenberg’s chamber symphonies. In fact, it’s this transitional period between late Romanticism and early modernism that serves as a basis for Kaminsky’s musical language. Debussy’s influence was evident in the pentatonic and whole-tone flute solos, played with intoxicating sensuality by Stacey Pelinka.

Minimalism was also at play in the score. The ever-present downpour of the title gave Kaminsky a chance to generate pitter-patter polyrhythms (though her use of the rain stick was too obvious and smacked of new-age music). The westbound train, too, offered opportunities for clickity-clack ostinatos. It’s somewhat of an overdone subject in the minimalist repertoire, with locomotory pieces by Michael Nyman, Steve Reich, and Philip Glass. Yet Kaminsky employed the chugging sparingly, and always in varied forms. For instance, the steady vibraphone pulse that stood in for crossing signals morphed imperceptibly into a hypnotic, free-flowing solo straight from a Modern Jazz Quartet album.

The score also displayed a sophisticated integration of leitmotives, many borrowed from existing music. There was a bit of Rhapsody in Blue on clarinet every time the scene changed to Stieglitz’s Manhattan apartment. A rising, Coplandesque sunrise gesture seemed to stand in for Georgia’s trusty paint box. And her budding love affair with Alfred was represented in a hurried quotation from Schumann’s Träumerei — a bit of canned romance for a relationship founded partially on financial and promotional gain. (Aside from a suggestive kiss, O’Keefe’s purported affair with Beck is never explored).

Yet Kaminsky is no mere mimic. This system of musical signs is fully integrated into her rich compositional palette. In fact, her personal style is somewhat reminiscent of O’Keeffe’s. There is the same balance of contrasts found in the painter’s canvases — the interplay of dynamism and stillness, for example, or the co-existence of finely drawn details and hazy ambiguity. And like O’Keefe, Kaminsky finds beauty in both the natural world and the man-made, as shown in her rain and train music.

The most striking similarity is the way these two artists mythologize Americana, endowing the sights and sounds of our nation with a mysterious, symbolic aura. In a mesmerizing instrumental interlude, Kaminsky tapped into the surrealist strain of O’Keeffe’s Southwestern art with her own collage-like, musical cross-section of the U.S. — at one point, a frame drum paired with husky flute played evocations of Native American melodies alongside violinist Dan Flanagan’s toe-tapping, Appalachian fiddling. Librettist Reed, who is also a filmmaker, provided an accompanying cinematic dream-sequence worthy of Fellini or Bergman. Her more static projections that served as backdrops for the production were always tasteful and unobtrusive. These incorporated just the right number of O’Keeffe canvases to keep the evening from descending into an art-history slideshow.

My one complaint about Kaminsky’s score is that her vocal writing wasn’t as sensitive as it has been in the past. I was expecting more of the lyrically expansive melismas of Hannah After’s aria from As One. There was nothing distinctive about the soloists’ aimless stretches of arioso. While mezzo Blythe Gaissert did her best to inject expressivity into her solo line, I never felt moved by her music. Nevertheless, she was able to shine in brief moments — the way she dipped into her resonant lower register, groan-like, on the phrase “Oh, Alfred, we are changing,” or the floating delicacy of her tone in introspective passages. She swelled to some impressive, climactic high notes in her “Paint Box” aria, a kind of cross between Manon’s “Adieu, notre petite table” and Violetta’s “Addio del passato.” But again, the number lacked the emotional impact of those showstoppers, with Reed and Campbell’s flat characterization partly to blame.

Kaminsky’s writing for Marnie Breckenridge is far more engaging. The soprano shone in this effervescent soubrette role, showing off some bluesy touches in an extended, Chicago-inspired jazz duo with Gaissert. Breckenridge is a genuinely funny singing actor and stole more than one scene. So it was unfortunate that she mostly disappeared in the opera’s second half, as her character was a better foil for Georgia than Stieglitz. Baritone Daniel Belcher channeled all the desperate passion of a Wagnerian lover into a letter-writing number, bursting out with a slight sob on, “never leave me again.” But we’re still left puzzled over why she left in the first place. We’re told that their relationship is “complicated,” but never shown why.

The male characters could have been left out entirely. But even when the two leading ladies were alone, their Bechdel-failing conversations inevitably turned to men. A fictitious train conductor, Aubrey Wells, filled the “nice guy” alternative to Stieglitz, but his portrayal fell into the Hollywood “wise black man” stereotype. He had no back story, and his sole dramatic function was to deliver cryptic observations on jazz that helped Georgia overcome whatever creative crisis she suffered. In spite of this, Nathan Granner performed admirably in the role; in a strange, sparse aria delivered on the caboose, his woody tenor blended beautifully with Peter Josheff’s clarinet line as they exchanged Messiaen-style birdcalls.