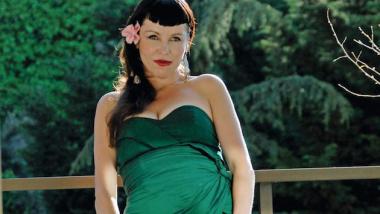 Note to self: Don’t let another three years go by before catching Lavay Smith again.

Familiarity doesn’t breed contempt when it comes to local musicians, but it can lead to complaisance. As one of the hardest working women on the Bay Area jazz scene, Smith is a regular presence at venues around the region, from Sundays at the Royal Cuckoo (duo with Chris Seibert on Hammond organ) and first-Fridays at Club Deluxe in San Francisco to Armando’s in Martinez and San Jose’s Poor House Bistro. It’s all too easy to put off catching her tonight in favor of next week’s gig. But then weeks turn to months. One concise set by Smith and her estimable Red Hot Skillet Lickers, and I’m reminded all over again of her abundant gifts as singer and the particular pleasures of an evening in her company.

I caught up with Smith again last Thursday, the opener of a four-night run in the Joe Henderson Lab, the SFJazz Center’s intimate, street-level room where she’s been a regular presence. An expert at assembling smart, thematic shows, Smith focused on songs made famous by Louis Armstrong and Fats Waller. While Waller, a prolific songwriter, bona fide pop star, and ebulliently virtuosic pianist, was a New York native, the rhythmic feel of the evening centered on Satchmo’s New Orleans, starting with the band’s rollicking opening number “St. James Infirmary,” a song inducted into the jazz canon by Armstrong.

Possessing a deep, finely textured voice, Smith knows how to have fun with a song. She sashayed through “If You’re a Viper,” an intoxicating dose of reefer madness from Waller. Even better was her rendition of “I’m Going to Sit Right Down (and Write Myself a Letter),” which was actually written by Fred Ahlert and Joe Young but indelibly stamped by Waller’s wit in 1935.

Smith loves to lag behind the beat, playing catch up with her band. It’s an approach to phrasing perfected by Billie Holiday, but Smith gets to a similar place by working backward via Bessie Smith, one of the singers Lady Day cited as a primary influence (along with Satchmo). The constant teasing flow of tension and release often works in concert with the lyrics she’s singing, like Waller’s delightful 1924 plea for amorous displays “Squeeze Me” (his first published song).

She didn’t lean on the double entendres as heavily as I recalled, so “Honeysuckle Rose” sounded more playful than lascivious, but maybe that’s because she dedicated to it to her father, who was in the audience.

Rob Barics’s clarinet work, woody and sinuous, tapped into the Crescent City lineage of Jimmie Noone and Johnny Dodds while powerhouse trumpeter Bill Ortiz brought the requisite open-horn swagger and simmering-muted crooning to the trumpet chair. But the band’s presiding spirit is Danny Armstrong, whose Satchmo raspy vocals served as an ideal foil for Smith. On trombone, his singing tone is a marvel of lyricism so lovely it’s impossible not to rue the instrument’s relative scarcity in small combo settings. Whether he’s playing open horn pretty and mellow, or lowdown and earthy with a plunger mute, Armstrong almost steals the show, to Smith’s evident delight.

She closed the show with a rousing version of “When the Saints Go Marching In,” with the band echoing her vocals. It’s a tune that all too easily slips into Shriners Club cliché, but the Skillet Lickers banished any hint of cheese with conviction. Called back for an encore, she and Armstrong delivered a soulfully defiant version of “Ain’t Nobody’s Business,” a classic blues that Waller recorded in 1922 (with blues matriarch Sara Martin).

It was 60 minutes of heaven that left me determined to make it to her San Francisco Jazz Festival show at Herbst Theatre on June 8. Backed by a full contingent of Skillet Lickers playing beautifully crafted arrangements she’ll be applying her husky voice to the songs of Patsy Cline, joined by pedal steel guitar master Bobby Black.

The jazz diva’s playful concert of SFJAZZ is just what you wished for this season.