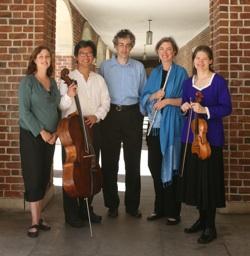 The Left Coast Chamber Ensemble organized its April 5 concert at the War Memorial’s Green Room around the idea of visual inspirations for music. The theme of “Audible Visions” led to a creative program, with all but one piece written in the past 25 years, and many kinds of musical thinking. What really mattered, of course, was what we heard, and that was marvelous.

In the midst of many excellent performances, the most affecting moments of the evening came in the program’s one solo piece, Kaija Saariaho’s Sept papillons (Seven Butterflies) for solo cello, exquisitely rendered by Leighton Fong. The music transports the listener into Saariaho’s unique sound world, as her imagination unites tone color and gesture in a deeply musical manner. Fong’s beautifully shaped performance made the most of what are, at their core, simple musical gestures that through the composer’s craft become more than the sum of their parts. This piece, written in 2000, is so fine that I would count it as a major addition to the solo cello repertoire, and I hope Fong will repeat it in future seasons.

The program included the winner of the ensemble’s 2009 composition prize, the String Quartet No. 2, by Matthew Barnson (a former Saariaho student), heard in its U.S. premiere. Built almost entirely out of string harmonics and extended techniques, this is a strong and often fascinating work. Although Barnson’s approach recalls a number of composers — Xenakis in particular, who wrote entire quartets based largely on unconventional sound sources — his work is fresh and arises from a distinct personality. While its starting point is the instruments' sonority, the piece also maintains great momentum through an alternating exchange and layering of instrumental gestures, as well as a deft use of surprising silences.

Congratulations are due to the Left Coast players for choosing a competition winner that isn’t simply a showoff piece, but instead is full of unusual technical and aesthetic challenges that were expertly addressed.

The program’s other premiere, Melinda Wagner’s Scritch for oboe and string quartet, is a well-crafted and tasteful piece. Commissioned by the LCCE and the Empyrean Ensemble, the work makes its way through a series of five short episodes written in sort of lyrical, expressionist mode. Though it didn’t set off the fireworks that the rest of the program offered, this is an appealing piece, and its evolving textures showcased the group’s excellent sense of ensemble. Oboist Tom Nugent’s well-developed lines was especially fine.

The program concluded with a departure from recent music, an impassioned performance of Gabriel Faure’s Piano Quartet No. 2 in G Minor. The ensemble’s performance made the case for this piece as an emotionally rich and forward looking piece, whether in the exchanges of uneven phrases between the piano and strings in the second movement; while savoring the strangely static harmonies of the Adagio; or when Eric Zivian’s superb work at the piano drove the ensemble through the stormier outer movements.

The program opened with Barbara Kolb’s Umbrian Colors, which received a sensitive, well-paced performance from guitarist Michael Goldberg and violinist Phyllis Kamrin. This brief piece is made up of four movements, each a little gem, that flow together beautifully. Kolb’s nuanced handling of the instruments’ relationship with each other and her absorbing, ambiguous harmonic language animate the work.

This fine performance suffered, once again, from its location. Although the Left Coast players seem to have settled into the Green Room for the long haul, it is, acoustically, a terrible place for concerts. The problem was especially jarring in Kolb's piece, as the violin and guitar sounded strangely disconnected, and at times seemed as if they were being played in different rooms. Faure's quartet suffered from a mushiness inflicted by the hall. While San Francisco doesn’t offer many great options for rented concert space, I continue to hope this ensemble will, at some point, find the space it deserves.