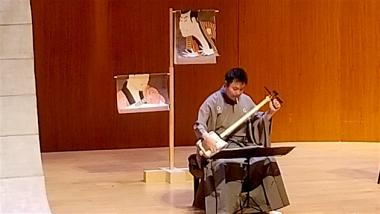 The performer/composer’s perspective has always mattered in music, but perhaps never more than right now. We are more aware than ever of whose story is being told, whose experience is at the center, and how layered our identities can be. But we’re also receiving artworks that are more adept at cultural sleight-of-hand, marvelous hybrid creations to explore that are both peculiar and particular.

So when Left Coast Chamber Ensemble commissioned Hiroya Miura to write a “micro-opera” (a 25-minute one-act) on the topic of the 18th-century artist Sharaku, the die was cast, and the whole concert, performed on Sunday at the Berkeley Hillside Club, became focused on Japanese culture and its intersection with western classical music.

At the heart of the program, perhaps surprisingly, was shamisen player and singer Hidejiro Honjoh, Japan’s Cultural Envoy for 2017. In the first half of the concert, he played Dai Fujikura’s Neo (2017), which he had commissioned. Although born in Osaka, Fujikura had emigrated to the UK, where, in addition to classical music, he got into experimental pop, jazz, and improvisation. He says himself that he thought traditional Japanese music was cliched and uninteresting. The collaboration with Honjoh, then, resulted in a piece that treats the shamisen like a rock guitar, in which the large plectrum (bachi) is used for percussive effect more prominently than in traditional music. Despite the instrumentation, the piece does not at all sound traditional, which is probably a relief to Fujikura, given his piece’s title.

Honjoh did give a demonstration of traditional music, but he did so in a way that was more compilation and improvisation on tunes than a straight traversal of them. At one point, he went through the four seasons, showing typical styles for representing things like ocean waves in summer and falling snowflakes in winter.

Stacey Pelinka, Kurt Rohde, and Jennifer Ellis played Debussy’s Sonata for Flute, Viola, and Harp, and the premiere of Karen Tanaka’s Wind Whisperer for the same instrumentation. Tanaka, now a composition professor at California Institute of the Arts, is deeply connected to Japanese aesthetics. According the LCCE’s online notes, this new piece was inspired by the Asian Art Museum’s current exhibit focusing on the work of Japanese artists Noguchi and Hasegawa.

Her piece began with a few strong gestures for the flute, to which the viola and harp added wind-like effects, gradually picking up melodic material. But the instruments rarely intertwined; instead their dissimilar timbres played off each other and the simplified texture made silence a more palpable part of the piece. It made an ideal intro to the Debussy sonata, which scouts, obliquely, some of the same aesthetic territory. Pelinka, Rohde, and Ellis performed it beautifully.

Hiroya Miura’s opera, Sharaku Unframed, was worth waiting for; it was both intellectually stimulating and enchanting. Miura takes on the mysteries of Tōshūsai Sharaku, one of the most celebrated and recognizable artists of ukiyo-e (prints and paintings of “the floating world”). We don’t know who he was, and we don’t know why he was only active for 10 months, from 1794 to January 1795 (though historians have made some strong guesses about that, stemming from a statement by a contemporary artist and writer named Ota Nanpo: “Sharaku designed likenesses of Kabuki actors, but because he depicted them too truthfully, his prints did not conform to accepted ideas, and his career was short ...”). In Miura’s mind, that makes him the perfect subject for a Noh play, because he was and is, a kind of ghost.

One possible identification for Sharaku is actually a Noh actor of silent roles, Saito Jurobei, an identification that, as Miura himself recounted, pleased him because it would make Sharaku triply ghost-like, but also because you can imagine him, a silent presence in the courtly Noh plays, yearning secretly for the robust, popular world of kabuki, whose actors he portrayed with such penetrating acumen in his woodblock prints.

It also so happens that the Noh actor theory found a proponent in an American expert on Japanese art, Arthur Davison Ficke. Ficke was also a poet and playwright who attended the first U.S. art show devoted to Sharaku and wrote a play about it, The Ghost of Sharaku (1951), in which every character is a ghost of memory from the exhibition. The play, with cuts and changes, became the text for Miura’s 25-minute opera.

This ghost opera’s music is appropriately understated, using Western instruments mainly (Pelinka and Rohde, with Michel Taddei on bass, and Haruka Fujii, a very discreet percussionist, all unerringly conducted by Matilda Hofman.) It’s the singers who dominate this score, and the writing for them is deft. The back-and-forth dialogue of Mr. Mansfield (baritone Daniel Cilli) and Madame Vignier (soprano Nikki Einfeld) is flexible and fleet, but never boring. Miura taps a comic vein that is subtly perfect for the very polite way these characters have of undercutting each other.

As Cilli opened the piece with a declamatory passage announcing the terms of sale for the various prints, Einfeld laughed over his shoulder “You have a beautiful taste, but never serious.” Einfeld’s personal warmth made this engaging, an attempt to begin a discussion. Later Einfeld sang the opera’s highpoint, both in terms of music and performance, “We move here amid mysteries.” Amid the pervasive restraint, this little arioso is a lyrical pearl, and Miura’s interleaving of these lyrical moments is the major reason the opera doesn’t drag. (And Cilli gets his own jab in: “These painters were not exactly serious. They were Kabuki boys ...”)

And then we’re suddenly in the world of traditional Noh as Honjoh, who has been sitting silently in the forestage, back to the audience, turns around and sings (in English and Japanese) the role of the Daimyo of Awa, in whose entourage is an unnamed, silent Noh artist. Honjoh was right at home in Miura’s Noh-style music. That moment brings a clarity that can only come from an insider witness, but what it clarifies is something universal, a truth that the other two characters can immediately understand.

When we delve into the art of another culture, we’re looking for that kind of transcendent understanding of the human condition. How neat that Miura was able to offer that so concisely and wisely.