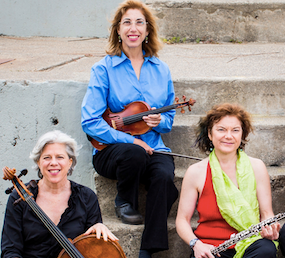 The Left Coast Chamber Ensemble went on a storytelling adventure in last weekend’s concerts, titled “Short Stories.” The idea, now embraced widely among musicians specializing in contemporary music, is that a literary or programmatic idea intrigues the potential audience and makes the composition seem more approachable. And it allows composers to pull from more of the cultural world that has influenced them. If it seems like going back to the 19th century, that’s not necessarily a bug for a group that likes to integrate contemporary music with a classic or two.

This program featured actor David E. Moore narrating Reply to a Dead Man by Walter Mosley with music by Laurie San Martin in its world premiere. San Martin provided a carpet of rhythms, meandering melodic snippets, and suspended tones played in an energetic hush by a five-member ensemble (Stacey Pelinka, flute, Andrea Plesnarski, oboe, Phyllis Karmin, viola, Michel Taddei bass, Michael Goldberg, guitar) over which the story was told. The quintet did a great job of setting the mood, which easily switched between creepy, funny, and casual. San Martin has a knack for finding the most poignant sentences in the story and suddenly pulling out the music, leaving just the words over silence in the most pivotal moments.

San Martin has a knack for finding the most poignant sentences in the story and suddenly pulling out the music, leaving just the words over silence in the most pivotal moments.

Moore was the perfect actor for this story, convincingly portraying African American character archetypes from the absent father to the feisty black mama. His deep voice was clearly understood throughout — a credit not only to him but also the composer’s careful instrumentation, the musicians’ sensitivity, and the sound engineer’s microphone balance. The story was captivating throughout, and in the final moments, the instrumentalists were finally able to break free from their restrained volume level and fully play out their floral lines and resonant harmonics in a heartwarming conclusion.

Flautist Pelinka opened the program with Syrinx by Claude Debussy, who as LCCE artistic director Anna Presler joked, was the only composer who wasn’t in attendance. The solo flute piece was mesmerizing, played with gorgeous, fluid tone and breathtaking expression.

Pelinka then joined Plesnarski, Leighton Fong on cello, and Eric Zivian on piano to play Maureen Ochi Sides’ I Am Glad, For I Am Finally Returning Home. The quartet was fun and happily naïve — a natural and simple composition.

Karmin’s violin substituted for flute to form another type of piano quartet in the West Coast premiere of Charles Zoll’s Bailes encima del escritorio de nuestra juventud (Dances upon the school desks of our youth). Zoll captured the vigorous energy of Latino dance forms with throbbing rhythmic patterns played with fiery passion by the ensemble. At the heart of the piece, Zoll, who is a serious dancer, stretched the rhythm and harmony into an abstract, dream-like state, with the pulse still beating but the content in a different world — hazy and elevated, beyond foot stomping and hip shaking.

LCCE’s season has resulted in an incredibly diverse range of voices on an equally wide range of instrument combinations. They will continue telling stories in April with a special project at the Magnes Museum in Berkeley about Bay Area’s refugees from 20th-century fascist Europe.