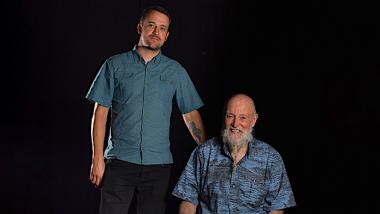 Terry Riley and Gyan Riley’s concert at the Bing Studio at Stanford on Saturday night was introduced with an anecdote about In C, now over 50 years old. The groundbreaking minimalist style from that piece is still a live branch in the works of the father-son duo, but there is much more there and the best of it is farthest from the tree.

Half of the eight songs on the program featured Terry Riley on piano, Gyan Riley on electric guitar, great turn-taking, and virtuosic climaxes (especially from Terry Riley’s keyboard playing and occasionally from Gyan Riley). Purely instrumental, these pieces shifted between styles on a dime, with seemingly every period of American jazz making a cameo over the course of the evening. Equally represented was the Hindustani classical tradition that Terry Riley imbibed from Pandit Pran Nath. Intricate minimalist loops showed up in these pieces as well.

But the highlights of the evening were the other four songs on the program, the pieces that in some way broke this mold. In one case, Terry Riley stood up to perform on a synthesizer resting in the inside of the piano, conjuring sounds that harkened back to albums like A Rainbow in Curved Air and Persian Surgery Dervishes. In another piece, Terry Riley moved to an electronic keyboard, taking full advantage of what felt like dozens of settings. Gyan Riley’s guitar distortions tossed against these diverse timbres, and the whole piece offered at an enveloping dynamic level. The only piece with vocals, “I took a ride on a rainbow,” was another highlight. The intimacy of the basement Studio was a fit for the calm, smoke-filled jazz that set the scene in the first minute of the piece. Terry Riley began each sung line, with Gyan Riley echoing the final phrase or word, occasionally harmonizing the final pitch. Perfectly cued, mad-fast solos intermittently grew out of the chill verses.

The most moving piece was “Folk Song” from their album Way Out Yonder. Here, Gyan Riley spins a lullaby-ish ostinato for a while before Terry Riley takes up the melodica, sending out the warmest tone you can imagine, improvising a melody with gentle ornamentation with the homey timbre of the just-perceivably out-of-tune melodica making this live performance unforgettably beautiful. (The recording will get you part-way there. If it draws you in, it’s worth finding the next live performance.)

No doubt, part of what made “Folk Song” so moving was the familial relationship of the performers. It’s not that this is new: intergenerational musical careers within families show up around the world, and examples can even be found amongst other minimalists/postminimalists (like John Adams and Samuel Adams). I wonder, though, if Terry Riley and Gyan Riley’s musical relationship has a tinge of gharānā about it, a lineage of style that is unique, a lineage from Pandit Pran Nath, American jazz, and minimalism.

There’s a fascinating musical story to be told here, a story woven with human themes of America in the wake of its counterculture, globalization, and American music-making during what Robert Fink has described as the twilight of the cultural authority of the classical music canon. Terry Riley’s story is a critical part of that twilight. With classical training and jazz chops, Terry Riley helped set off a new direction within the American classical music subculture in the 1960s. Now he and his son Gyan Riley navigate the aftermath, offering their eclectic mixture of styles to audiences composed of classical composers, jazz lovers, fans of Indian classical music, and pop, rock, and electronica devotees. In a way, this family tale could be the story of the last 60 years of American classical music.

Terry Riley and George Brooks Offer You the World