All orchestral recording activity was supposed to have been halted worldwide due to the COVID-19 pandemic, but that didn’t stop the Lithuanians from recording one of their own last summer.

Žibuoklė Martinaitytė, a 48-year-old Lithuanian composer now living in New York City, had a backlog of recent orchestral compositions and wanted to release her first complete album. So they persevered. Recording sessions in the Lithuanian capital city Vilnius were scheduled and postponed and rescheduled and postponed again. The young Lithuanian conductor Giedrė Šlekytė was commuting from Austria, and pianist Gabrielius Alekna, now on the faculty at Brooklyn College, needed a special permit from the Lithuanian cultural minister to fly in from New York.

Finally, in the waning days of July 2020, with the threat of the COVID-19 always present, they managed to complete the album (Ondine). A good thing they did, for Martinaitytė’s orchestral music has a sensuously unified personality that is worth getting to know. The key word is “vibrate,” with busy surfaces as smooth and continuous as can be. 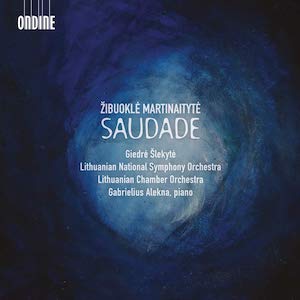 The title of the album is, of all things, a Portuguese word often used in Brazilian music, Saudade (also the name of one of the compositions), which roughly means a melancholic and dreamy longing for something someone loves — a country, a person, or in this case, our lifestyles put on ice by a deadly pandemic. Saudade itself opens in a dream-like state, strings fibrillating, the timpanist operating the pedals to change the pitch, brass players singing through their mouthpieces as they play, contrabassoons and basses emitting a deep buzz, and other unusual techniques. The continuous trembling builds to three climaxes, gathering more restless energy in the later stretches. It’s a rather different, more restless use of “saudade” than how the Brazilians do it.

Millefleur, which literally means “a thousand flowers," also opens in a vibrating state, on one steadily-evolving chord based on a drone until pounding drums introduce a more active segment, with violins playing arpeggios on open strings. Matters eventually revert back to the vibrating tremolos, or the thousand flowers, as the music twitters toward a gradual fade.

Martinaitytė claims that the longest piece on the album, Horizons, deliberately tries to “disintegrate the experience of a predictably logical sequence,” but to my ears, the piece definitely has a shape. The lower strings vibrate first in a foreboding low-key mass of sound, then a motor starts running in the repetitive manner of Steve Reich. There is a long soft-focused intermezzo of scraping and buzzing harmonics from the cellos, abruptly interrupted by orchestral howling. The Reichian repetitions briefly return, as does the opening gloom. Sounds logical to me, almost like a palindrome.

Chiaroscuro Trilogy for piano and string orchestra (though not a piano concerto per se) is in three continuously-played movements. In “Tunnel,” melancholy piano chords toll against rustling lower strings; the texture brightens when Rachmaninoff-like chords in the piano hammer over tremulous strings, but the feeling remains ominous. “Meteors” begins with radiant string harmonics, moves downward and gradually segues into “Darkness of Light,” where the piano keys tinkle atop the ever-present vibrating string tremolos.

Chiaroscuro uses the Lithuanian Chamber Orchestra but the other works claim to have the Lithuanian National Symphony Orchestra — and a promotional video reveals that it was the full band, unmasked, seated close as in normal times, playing beautifully. Somehow, they got it done.

Caroline Shaw Offers Her Own Spin on Folk Tradition

A decade’s worth of the Canadian composer’s challenging new music takes time to absorb.

George Walker’s Last Work Gets a Fresh Recording in Seattle