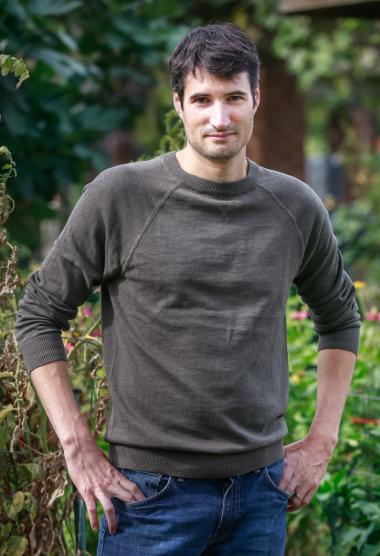 What should you wear with this album? Well, probably comfortable, yet presentable clothes — you’re going on a long drive up the coast, or possibly through lots and lots of farmland. You’ve got tissues within reach, because you’re ready to feel some heaviness. But you don’t even need them: it ends up being enough to just pull over at a lookout point, and not know what to say. 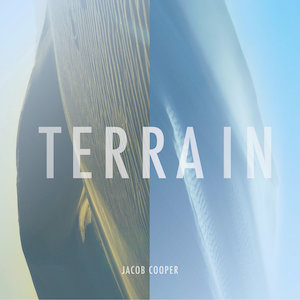 Jacob Cooper’s sophomore album Terrain (New Amsterdam Records) is made up of three monster tracks: Ripple the Sky, Expiation, and Terrain. Written for the studio, Cooper collaborated with singers Theo Bleckmann and Jodie Landau, as well as cellist Ashley Bathgate. In the same way that a fortune teller speaks, in language open enough for anyone to find themselves fitting, all three tracks open a stage for contemplation, a stage garnished with hand-made sets and lighting from some setting sun.

Ripple the Sky starts with some throat-clearing, audibly in the way sound jaggedly starts and stops, but also in form. I found myself waiting for the show to start, which it does some two minutes in. The poem, written by Greg Brownderville and issuing from the miraculous throat of Bleckmann, is far and away the most difficult to decipher of the three tracks. However, the vowels and consonants are a textural layer on their own, and it’s like being let in on a secret when one actually catches a whole phrase of English.

Without liner notes, it is hard to say how married the text and the music are conceptually, but such lines as “Butterflies flickered out of your mouth and flew toward mine,” and “You dissolve me in your wings of melted glass,” and “He is dead and gone” fuel the engine of this musical dream-space. I understand it as a walking-towards-the-light kind of music, death approaching as the refraction of the voice sweeps wider, broken down into its constituent parts.

Ripple the Sky is brought to its end by a chaotic string scratching sound. Having been in the background, when it sweeps forward it feels like a big, crazed bug flying up in your face, and all you want to do is duck, or run.

Expiation takes its name from a term similar to “atonement,” but has an outward connotation. With stunning poetry by Dora Malech, the second track feels like an outpouring. As the experience gets more intense, it is as if the music is rocking itself for comfort, to continue to endure the mounting beauty and feeling. My favorite moment in the album is six minutes into Expiation, when Landau, who leads an incredible 12-minute arc in this track, navigates into more rapid verses. The blood is suddenly flowing out twice as fast, with joy and urgency: “And the bandage unwound as I walked backwards/The sun flashed its signal off a sharpened edge/The wound unbound wept beyond consolation.”

Cooper controls the unfolding of musical elements so naturally that these gargantuan tracks work to pull my attention through every moment, resulting in a kind of concentration that feels similar to guided meditation. Terrain manages to do this, but because of the questioning nature of the text itself, by Zach Savich, it sounds a little too much like a guided meditation. Much of the delivery of the text is in a two-toned recitative manner over a drone, and this steers the piece within sniffing distance of a Los Angeles yoga studio. Despite this, by five minutes in, the tapestry is rich enough to not care, and to be open to these odd, alien, billowing words.

This album has become useful to me in helping to open up to thoughtfulness, which has been difficult in my isolation. It is a beautiful way to look at the sky when sky is not available. Beyond this, it is worth mentioning that this roster of artists includes no people of color, and while I highly recommend taking Terrain in, this is a time to be conscious of our consumption, and to also support artists of color.

Correction: Poet Dora Malech's name was misspelled when the review was initially published.