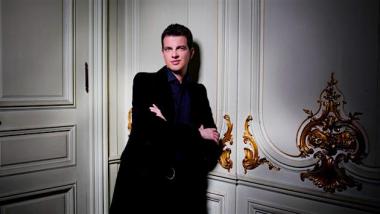 Letter from Paris: Kaufmann and Jaroussky, Back to Back

Sometimes you have to go to the center of classical music to sample the richness of what’s going on right now. While in Paris this past week, for the first time, I caught up with tenor Jonas Kaufmann in recital with Helmut Deutsch at Théâtre de Champs-Elysées on September 20, and countertenor Philippe Jaroussky and soprano Emoke Baráth with Jaroussky’s period instrument Ensemble Artaserse in an all-Handel program at Philharmonie de Paris on September 21. Two of the finest male singers of this generation in recital, one day apart. And that only scratches the surface of what was on offer in a week that also offered the Peter Sellars production of Tristan und Isolde at Opéra Bastille and Siegfried in concert by the Mariinsky Orchestra and Valery Gergiev at the Philharmonie.

Kaufmann’s evening, heard from a top side box that supplemented excellent, clear sound with occasional glimpses of the tenor’s head and hands whenever I leaned out far enough out the window, was a disappointment. The program’s two draws were Gustav Mahler’s Rückert-Lieder and, surprise, Richard Strauss’s Four Last Songs. While the Mahler is often performed by men, Strauss’s final songs were intended for soprano.

These two major works were preceded by six Liszt lieder in the first half and seven Wolf lieder post-intermission. Wolf composed the latter, which were settings of poems by Heinrich Heine, when he was between the ages of 16 and 20. Infrequently performed, their debt to Schumann’s Dichterliebe is obvious, with literal aping of some melodies and similar extended piano postludes.

Kaufmann started strong in the Liszt, with beautifully warm and sweet soft notes that floated through the theater. His highs were also quite fetching, although the glints of steel that shone in his younger years were a mite tarnished, and sounded less pure.

Once Kaufmann got to the familiar Mahler, however, a virtual insistence on straight tempo, and a somewhat cavalier treatment of phrases that other artists (Janet Baker, Dietrich Fischer-Dieskau, and Alice Coote amongst them) have invested with great meaning, left the interpretations wanting. To provide but one example, Kaufmann sang the opening line of the first song, “Ich atmet’ einen linden Duft,” (I breathed a gentle fragrance) without the exquisite soft lift on the word “linden” that is essential for a winning interpretation. Instead of overwhelming us with feelings of love and beauty in “Liebst du um Schönheit” (If you love for beauty), pain in “Um Mitternacht” (At midnight, which was sung last), and resignation and solitude in “Ich bin der Welt abhanden gekommen” (I am lost to the world), he gave us lovely singing that merely scratched the surface of these songs.

Even more disappointing were the Four Last Songs, which sounded as though Kaufmann had not yet found a home for them in his throat. All the notes were there, but where was the sense of nature in “September,” or the resignation and feel of ultimate farewell in “Im Abendrot” (In the evening)? The high in “Beim Schlafengehen” (At bedtime) was hit straight on, initially without vibrato, as though the tenor was a bit unsure of himself, and other highs lacked pliability and felt a mite shortened.

Here as everywhere, Deutsch played beautifully. His consistently poetic, carefully measured solo passages gave evidence of a total understanding of the music at hand, tempered by a determination not to upstage the tenor. In the end, it was not enough. Instead of a glorious summation of Strauss’s art, the performance suggested that Kaufmann was not fully comfortable with either the songs themselves or the state of his voice.

There were four Strauss encores: “Heimliche Aufforderung” (Secret invitation), “Befreit” (Released), “Traum durch die Dämmerung” (Dream in twilight), and “Breit’ über mein Haupt” (Spread over my head). Absent were the unvarnished exaltation and care with words heard in other performances, including those of Kaufmann himself on his 2006 Strauss recital with Deutsch for Harmonia Mundi. No singer need slavishly imitate recorded examples of these songs, including Strauss soprano favorite Elisabeth Schumann’s magical “Traum durch die Dämmerung,” or tenor Robert Hutt’s “Breit’ über mein Haupt” with Strauss himself at the piano. But to ignore the wealth of possibilities in these songs and sing them straight is to ignore what the composer expected.

By contrast, Jaroussky, Baráth, and Ensemble Artaserse presented as perfect a recital as I have ever heard. Our seats turned out to be in very front row of the Philharmonie’s orchestra section, albeit all the way over on hall right. This can be a terrible place to hear piano, but it proved superb for voice and period instruments. With voices as beautiful as this pairs’ are, you can’t ask for more.

The all-Handel program interspersed solo arias and duets from Ariodante, Lotario, Il Parnasso in Festa, Almira, Giulio Cesare (not “V’adoro pupille” or “Piangerò la sorte mio,” alas), Rodelinda, Serse, and Scipione with various movements from the Concerti grossi op. 6 (nos. 4, 5, 8, and 11). I can’t pretend that the singing was the deepest I’ve ever heard; what moved most was the perfection of sound rather than the emotions behind the words. But the voices were so beautiful, impeccably produced, and evenly balanced in volume, and the angry duets so amusing, that it mattered little. Jaroussky may have yipped twice in the final encore, the duet “Fermate” from Rinaldo, but he and Baráth were so endearing in the way they faced off, turned their backs on each other, and began to storm off only to about face and have at each other one more time, that all one could do was applaud and cheer.

Eclipsing the nature imagery and hopefulness embedded in some of Mahler’s songs, the fine baritone went down a pessimistic path.

To prolonged high-pitched cheers and applause, Munich-born tenor Jonas Kaufmann, 41, strode onto the stage of Zellerbach Hall for his Bay Area debut, offering a unique instrument and experience; one of the most versatile, compelling, and vexing recitals in memory.

Precision, preparation, and a wide set of interests and activities help make Fabiano’s performances so individual and compelling.