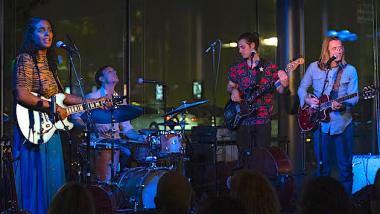 Tempests and catastrophes rage around Leyla McCalla but she never loses her cool. With her remarkable combination of warmth and self-possession, the New Orleans-based vocalist and multi-instrumentalist made the SFJAZZ Center’s Joe Henderson Lab her own Sunday night, focusing on music from her new album Capitalist Blues (Jazz Village). On the fourth sold-out show of her two-night stand, she delivered a concise set of class-conscious songs that felt both timeless and dialed directly into the zeitgeist. 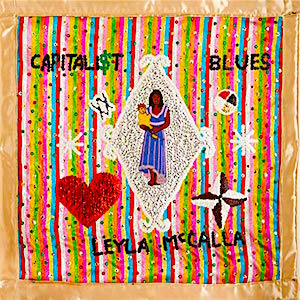 Joined by her young New Orleans band featuring guitarist Dave Hammer, drummer/percussionist Shawn Myers, and bassist Pete Olynciw, McCalla alternated between electric guitar, banjo, and cello. She’s collected a fascinating pan-Caribbean book of songs that tie her adopted hometown to Trinidad, Haiti (where her parents were born), and points far beyond. Possessing a voice that’s pellucid and becalmed at any tempo, she sang of war, poverty and injustice, maternal tenderness, and sacred devotion.

She opened the set solo, playing a rippling figure on her electric guitar while singing “Penha,” her beautiful mashup of a pilgrim’s prayer with verses in Haitian Creole and English, including lines translated from the Portuguese of Luiz Gonzaga’s “Baião da Penha.” Joined by her band, she switched to banjo for “The Capitalist Blues,” a slow drag indictment of the rat race, sung more in sorrow than anger.

Strumming her cello high on the neck, McCalla delivered the lament “Heart of Gold,” with subdued grace. She composed the setting of the poem “Vari-Colored Song” for her 2013 debut album Vari-Colored Songs: A Tribute to Langston Hughes (Music Maker Records), which she released at the end of her one-and-a-halfyear tenure with the Carolina Chocolate Drops.

Hammer’s eerie, distorted guitar introduced McCalla’s song inspired by the siege of the Syrian city of Aleppo, an anguished piece that segued via Myers’s hand percussion into “Mize Pa Dos,” a Haitian Creole song about poverty that keyed on Hammer’s stinging slide guitar.

The descriptions of her subject matter might make a McCalla concert sound like a downer, and it’s true that she delves right into weighty issues. But the smooth surface of her voice neither pleads nor preaches, and her comments between songs let listeners feel the cool water running deep. On her song “Heavy as Lead” she talked about the old housing stock in New Orleans and her daughter’s exposure to lead paint, turning a news story into a mother’s charged indictment. Her gentle, unspeakably sad version of Ella Jenkins’s lullaby “Wake Up, Little Sparrow” offered a reminder that the best children’s songs, like folktales, often serve as cautionary chronicles rather than escapism.

At her best, McCalla conjures a cross-cultural, up-from-the-roots take on working class struggle. On the banjo-driven “Money Is King” she summoned the disgusted plaint of the great calypsonian Growling Tiger (aka Neville Marcano), a Caribbean counterpart to her own “The Capitalist Blues.” She closed the set with the Haitian anthem “Settle Down,” a song about rising up in protest.

McCalla, it seems, is just getting started. Next week Smithsonian Folkways Records releases Songs of Our Native Daughters, a project exploring the experience of black women in slavery by a new roots-music group featuring McCalla and her former Carolina Chocolate Drops bandmate Rhiannon Giddens, along with Amythyst Kiah and Allison Russell.