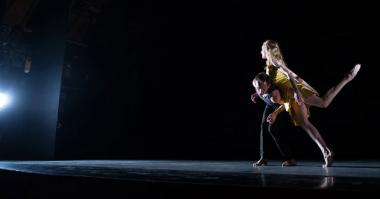 Wendy Whelan, a former principal with New York City Ballet, proved herself time and again when she was with the company that she was more than a Balanchine body with attenuated limbs and keen musicality. When she retired last October, at age 47, from the Lincoln Center stage she'd called home for nearly three decades, she hung up her pointe shoes — but she'd no plans to stop dancing.

In 2013, she'd already reinvented herself as a dancer with her inaugural project of the Wendy Whelan New Works Initiative, Restless Creature, which received its world premiere at Jacob's Pillow Dance Festival and drew critical praise. The evening-long work consists of four duets she commissioned from four different choreographers, each piece danced by Whelan and its maker.

On Thursday night, January 15, Whelan brought Restless Creature to the Yerba Buena Center for the Arts in San Francisco for a two-show run, presented by San Francisco Performances.

The choreographers, for much of their pieces, seemed to draw from a very similar palette of movements, for example squiggly shoulders and hips, wriggly hands, a small extension of the leg that's quickly retracted, and a head tick. The four duets were also fairly earthbound, apart from some lifts that somewhat extended movement into vertical space but left me wanting more variation in the duet's use of the stage.

The similarities in each of the four duets is a challenge Whelan faced in grouping the the works in one evening. That two of the works used music by Philip Glass, added to the effect of sameness.

Madrid-born Cerrudo, a resident choreographer with Hubbard Street Dance Chicago, opened the evening with his "Ego Et Tu." The piece began center stage with an intriguing solo he performed set to mournful music by Max Richter. A short time later, Whelan, in a silky, pearl-gray slip, dramatically stepped forward onto the stage from behind a rising curtain to dance a solo, expertly moving her languorous limbs in calligraphic patterns to a mood-changing, hypnotic score by Philip Glass. Cerrudo then joined her for the duet to a piece of music by Olafur Arnalds, which morphed into a composition by Gavin Bryars before the two exited the stage.

There was so little eye contact with the audience from the dancers that you felt you were peering through a peephole. Whelan's face stayed impassive throughout the piece and, apart from a short glance they cast each other near the end of the work, the two danced together as if they were in separate universes.

Joshua Beamish's "Conditional Sentences," had its world premiere Thursday and, according to a spokesperson for San Francisco Performances, was completed earlier that same day. At a brief Q & A following the performance, Beamish explained that they'd junked the piece he'd set on Whelan and himself at the 2013 world premiere of Restless Creature, and he subsequently created this new, riveting work to the J.S. Bach Partita No. 2 in C Minor.

Like the Cerrudo piece, most of Beamish's work had the dancers moving in parallel universes, like pieces in a jigsaw puzzle, trying to complete it but never finding the missing piece.

In Kyle Abraham's "The Serpent and the Smoke," Whelan showed some personality. Set to an electronic score by Hauschka and Hildur Guðnadóttir, Abraham's choreography was sinuous but again with bodies close to the ground. He created some interesting twists, turning some more traditional partnering maneuvers on their head by having Whelan support him instead of vice versa. Toward the end of the work, Whelan let her hair down and, in the half-light, moved through the shadows toward the wings, like a restless creature.

"First Fall," by Brian Brooks was the closest the evening came to a pas de deux. In this fascinating work, the performers first stand at either end of a bare stage. Whelan's hair is down and she's barefoot. Then they start tangling and untangling themselves.

While many of the small movement patterns again appeared, the work's strongest choreographic structure is the series of falls Whelan performs throughout the piece. The drama of Whelan's vertical fallbacks over Brooks' body, or when she falls sideways or forward over him gives the duet the edge and dramatic force it needed to contrast with the small movement patterns that seemed like filler to keep the audience in suspense until the next time Whelan goes off her vertical axis.

Whelan's “leaps of faith” as she allows herself to fall numerous times during Brooks' work were compelling. Perhaps it's symbolic of the path she's creating for herself.