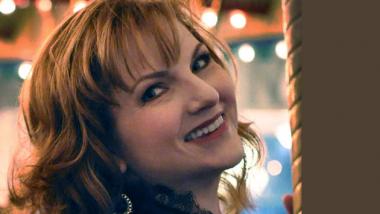 Lisa Delan’s performance Wednesday evening at the San Francisco Conservatory of Music was billed as part of the Alumni Recital Series. But inside the SFCM’s comfy Sol Joseph Recital Hall, it felt more like a visit to the homes of the five composers — four of who were smilingly seated in the small audience — with soprano Delan serving as the friendly, fascinating, attractive and — did I forget ‘talented’? — hostess.

Luna Pearl Woolf, the first up of those composers, was flanked in the fourth row by the children she parents with cellist Matt Haimovitz, there on stage with pianist Christopher O’Riley to accompany the world premiere of his wife’s Rumi: Quatrains of Love, which opened a program that in several ways also served as an early run-up to Valentine’s Day. Delan, in fact, was dressed in a bright red ruffled dress, as she vocalized English translations of ten short poems by the title 13th-century Persian Sufi.

Her vocalizing the first of the poems toward the inside of the opened Steinway grand, with O’Riley’s foot on the sustain pedal, was the first of the evening’s several nontraditional devices, and it worked to create an intimate chill. Woolf’s composition alluringly displayed diverse facets of love refracted through a variety of genres, with Haimovitz channeling a jazz bass pizzicato here, sliding into Middle Eastern modes there, sometimes fluttering with O'Riley like attendant lovebirds. And Delan drew fans close to her warm, heart-friendly tone and her compelling conveyance of lyrics, rendering the sentiments of the venerable Rumi — with the help of a good translation — timeless and borderless.

It felt like a new experience to hear Gordon Getty's Four Dickinson Songs up close and personal, though their performance by Delan a year ago, with Robin Sutherland, had seemed unaffected and accessible, even in awesome Davies Hall. The granitic aspect of Getty’s composition, at times Mahlerian in its panoramic scope, was perhaps more striking in the smaller SFCM venue, and the contrasting delicate veins and occasional pastoral touches were more aurally accessible, with pianist Robert Schwartz forthcoming with colorful support. The most familiar of the evening’s many pieces of verse — Dickinson’s “Because I Could Not Stop for Death” — proved the composer capable of setting and changing a scene convincingly, and providing the singer with a comfortable but affecting vehicle for her lyric. Delan’s clear diction, and the ensuing approval of the audience inspired Getty to rise from his seat, beside his wife Ann, with his arm raised in gratitude.

The granitic aspect of Getty’s composition, at times Mahlerian in its panoramic scope, was more striking in the smaller venue, and the contrasting delicate veins and occasional pastoral touches were more accessible.Jake Heggie manned the piano behind Matt Haimovitz to accompany a portion of the song cycle Heggie wrote for Delan, From the Book of Nightmares. (This and others of the program’s selections are heard on Delan’s 2013 PentaTone Music recording, The Hours Begin to Sing.) Here Delan, an unquestionably fine actress, embodied poet Galway Kinnell’s experiences with his young child, looking and sounding both comforting and concerned in “Again”, and lullabying charmingly on “Back You Go”, the cello again evoking its Middle Eastern ancestry.

We’ve known Heggie to be a master at creating melodic lines matching a text, and Delan made convincing use of the composer’s gift. “My Father’s Eyes” was wonderfully loving and lustrous, and just a touch triste.

The second half of the program continued to showcase Delan’s skill, power, and versatility. A  pair of pieces  by John Corigliano  and an arrangement by Christopher O’Riley, inspired by a Joni Mitchell song (“The Wolf Who Lives in Lindsey”) began with a howl from Delan that elicited titters from the elder members of the audiences and big grins from the youngsters. The howl was effectively taken up by Haimovitz’s cello, and at one point cleverly arpeggiated on O’Riley’s piano.

Delan’s skill as a thespian helped thicken the impact of Corigliano’s rather flat melodic lines, but the text, from Mitchell, occasionally challenged her with unsustainable words (for example, “goes”). Ending the first section, “The Heavy, Heavy Snow”, Delan made the entire audience her pack for a spirited mass howl.  Minimal electronic effects were brought in to enhance the atmosphere, but the feral mood was far more impressive than any melodic movement.

Changed into black ruffled pants and top, Delan started David Garner’s Phenomenal Woman seated in the dark on a chair, with her legs up on the Steinway. There ensued a sort of cabaret variety set, with some jazz, some boogie, and some Randy Newman-like whimsy on the piano, well-handled by Kevin Korth. Alas, most of the melodies and arrangements weren’t particularly memorable, and the lyrics, from poems by Maya Angelou, were for some reason less distinctly audible than they’d been earlier in the evening, particularly with the house lights off and the program notes unreadable. Still, Delan proved the trouper, at one point intoning in an amusingly childish squeak. It was unclear whether she was trying to affect an African-American accent to match the material’s source.

Delan encored with a lovely and evocative arrangement by Garner of “Auld Lang Syne,” offered in memory of Delan’s long-time accompanist Kristin Pankonin, who died last summer after a long battle with breast cancer.

It had everyone appreciating good music and the people, living and gone, who make and share it.