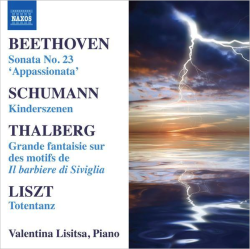 This new Naxos disc, recorded by the Ukrainian-born, North Carolina–based pianist Valentina Lisitsa, is not actually new. It was recorded in 2008, issued in 2010, and released worldwide by Naxos only this year. The reasons for the delay are murky and legalistic. In any event, Lisitsa is no longer with Naxos. She now records for Decca — and for YouTube, where she has so many followers (millions!) that calling this phenomenon a cult would be no exaggeration.

Her playing in this recording, however, is strangely uneven. The program opens with Beethoven’s Sonata in F Minor, Op. 57, “Appassionata.” Simply put, this is one of the most insipid performances of the “Appassionata” I’ve ever heard. The first movement marches along robotically, with only a couple of momentary relaxations at the beginnings of the second theme, up until the speedy coda. The jarring, syncopated sforzandos are abundant in Beethoven’s score but regrettably missing in Lisitsa’s performance. Rhetorical phrasing is also nonexistent. As a result, the first movement lacks rhythmic vitality as well as enthralling eloquence, both of which are absolutely essential for Beethoven’s music.

The other two movements of the sonata fare little better. The sharply etched rests in the slow movement are smudged by overindulgent pedaling; consequently, there is no captivating rhythmic interplay between the voices. As far as the dynamic nuances are concerned, they are presented mostly as one dull, interminable plateau in the mid-dynamic range, with no pianissimo, no surges, no shattering contrasts, and no sforzandos to speak of. The CD booklet mentions that Lisitsa is planning to record all of Beethoven’s piano sonatas. If she wants this new undertaking to be a success, she should reevaluate her approach to Beethoven. Better yet, she should come up with one.

Her playing of Robert Schumann’s suite Kinderszenen (Scenes from childhood), Op. 15, is more heartfelt than that of the “Appassionata.” Lisitsa still continues to show an inexplicable disdain for pianissimo, which hurts several sweetly tender pieces in this opus. And she routinely ignores the sforzandos in “Hasche-Mann” (Blind man’s buff), completely eliminating the snappy, tagging moments from this rowdy children’s game.

Here Lisitsa’s unimpeachable technique is buttressed by a breathtaking, fiery intensity. Two numbers in the Kinderszenen, though, break the traditional interpretive mold. No. 5, “Glückes genug” (Happy enough), is delivered forte rather than piano (indicated in the score), and this works surprisingly well. Instead of expressing a mild-mannered gratitude, the child is boisterously happy. Lisitsa plays the next number, “Wichtige Begebenheit” (Important event), more slowly than most pianists, in a grand style, making the event in question genuinely important.

The concluding two pieces, Sigismond Thalberg’s Grande Fantaisie sur des motifs de Il barbiere di Siviglia, Opéra de Rossini, Op. 67, and Franz Liszt’s Totentanz are both fiendishly difficult to play. Lisitsa dispatches the two virtuoso showcases that take up almost a third of the disc with technical perfection and dazzling brilliance. In the Thalberg, she still lacks the warmth and nonchalant bel canto charisma that can be heard, for example, in the reading of this fantasy by Raymond Lewenthal (1923–1988), one of the scions of Romantic tradition.

The Totentanz (Dance macabre), which Liszt arranged for solo piano (he wrote the original version for piano and orchestra), is unquestionably the best on this disc. Here Lisitsa’s unimpeachable technique is buttressed by a breathtaking, fiery intensity. Why couldn’t she play the entire program this way?