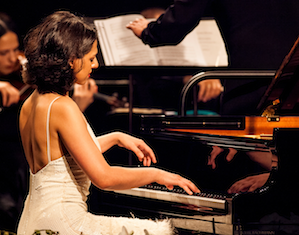 On Sunday night at Le Petit Trianon in San José, the Steinway Society of the Bay Area presented the young Georgian-born, Paris-based pianist Khatia Buniatishvili, who played quite an ambitious program. How about Liszt’s colossal B-Minor Sonata as a warm-up piece? Then follow it with Ravel’s preposterously difficult transcription of his symphonic poem La Valse?

Fortunately, in both of these pieces Buniatishvili demonstrated more than awe-inspiring octaves and astounding passagework. Liszt’s sprawling, multifaceted Sonata can easily disintegrate into a succession of motley fragments. Buniatishvili, however, bonded the Sonata into a cohesive narrative that overflowed with ferocious intensity, vivid imagery, and sheer excitement. For many performers, the numerous transitions between the sections of this convoluted form can be rather problematic, but not for Buniatishvili; she navigated through these with naturalness and a deeply felt musicality.

Her fast tempos tended to be breakneck at times, almost recklessly so. I don’t recall having heard the fugue played so fast. Somehow, though, it worked — partly because Buniatishvili never lost tone control, and partly because the manic quality of the fugue is integrally linked with her own fiery musical persona.

Ravel’s grueling La Valse was carried out with effortless grace. Buniatishvili savored morsels of waltz tunes, progressing from one shattering climax to the next, finally arriving at an apocalyptic ending.

Buniatishvili bonded the Sonata into a cohesive narrative that overflowed with ferocious intensity, vivid imagery, and sheer excitement.

Chopin’s B-flat Minor Sonata, Op. 35, was less satisfying. Buniatishvili’s trademark cauldron of turbulence and passion, which was so irresistible in Liszt and Ravel, did not exactly agree with Chopin’s subtler ways of expression.

A separate issue is the problem of the finale in Op. 35. The concert program notes mention that Arthur Rubinstein is said to have remarked that the finale portrays the wind howling over graves. First of all, it was not Arthur Rubinstein (1887–1982) but another A.R., Anton Rubinstein (1829–1894), who reportedly said that. Second, ever since the comparison was made, most — if not all — pianists, including Buniatishvili, play this movement as fast as possible, often with a great deal of blurry pedal added for good measure. As it happens, Chopin did leave a description of the finale, and it had nothing to do with winds of any kind, over graves or not. In one of his letters, he wrote that in the finale “the left and the right hands gossip in unison after the March.”

She delivered the composer’s intoxicating rhythms, abrasive polytonality, and catchy folk jingles with lusty abandon and a plethora of coloristic shadings.

Chopin’s intentions sharply contradict the widely established interpretation of the finale. Instead of inarticulate gusts of wind, Chopin offers an acerbic scene of malicious gossip, which calls both for a slower tempo than the all-too-familiar prestissimo (in place of the presto indicated in the score) and for speechlike inflections. I do hope that someday pianists will finally read Chopin’s letter, slow down, and restore the finale’s original expressive and structural complexity.

Buniatishvili concluded the second half of her program with yet another composer’s transcription: Stravinsky’s Three Movements from his ballet Petrouchka. She delivered the composer’s intoxicating rhythms, abrasive polytonality, and catchy folk jingles with lusty abandon and a plethora of coloristic shadings.

Responding to standing ovations, Buniatishvili returned to the piano for an encore. Just as she was about to begin, a woman in the back of the hall stood up and requested a Georgian song. Without missing a beat, the pianist proceeded with a few strains of Wilhelm Kempf’s transcription of Handel’s G-Minor Minuet, which then seamlessly morphed into a charming Georgian melody by Giya Kancheli.