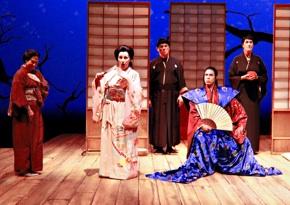 Something special is happening in Livermore. At a time when too many General Managers seem to ignore that opera’s success or failure ultimately depends upon the singers, not directorial and scenic sensationalism, Livermore Valley Opera has taken the care to stage Puccini’s Madama Butterfly with a cast that does the opera and the company proud.

In Livermore’s modern, 500-seat Bankhead Theater (opened October 2007), whose wide stage, substantial pit, and comfortable large lobby are well suited for opera, the performance gave every indication of a company that has its priorities in order. If you have a limited budget, better to spend the bulk of your funds on singers who can do their roles full justice.

Hence the trade-off between Jean François Revon’s extremely simple set and the casting. A nicely finished, raked wooden platform took up most of the stage. Upon it, pseudo-Japanese screens rose and fell, sometimes ludicrously, depending upon the action. Behind it, a simple backdrop projection of black, barren (presumably) cherry trees whose blue sky sometimes changed color, lent an ominous quality to the proceedings.

Given that lighting designer Kevin Bautch’s minimalist intervention did little to add interest — a follow spot was sorely needed for Butterfly’s entrance, and the red lighting that accompanied her suicide has been done to death — it would have been nice had director Brian Clay Luedloff done more to animate his chorus and some of the principals.

Nonetheless, much of the directing was on the mark, and the singing was of a consistently high order. The undisputed star, soprano Melody Tachibana King, alternating with Carrie Hennessey in the role of Cio-Cio San (Butterfly), is a lyrico-spinto whose understanding of the role is complete. Blessed with a beautiful voice that carries well, colorful and well-controlled vibrato, and natural dramatic instincts, she husbanded her resources until the final act, where the volume and solidity of her highs in her moving “Tu, tu piccolo addio” contrasted with the vocal restraint of much that had preceded it. Her movements, too, were carefully judged, remaining within the confines of what might be considered a very young geisha’s province. Although wanting for more sustained high climaxes, her deeply sympathetic portrayal and fully committed, plangent vocalism elicited deserved bravas.

Equally committed, and quite effective in cocky, callous, cluelessness was tenor Christopher Bengochea’s B. F. Pinkerton. Although the voice lacks the cutting squillo (ring) that defines the Italian tenor, and does not expand in volume on top, it has a dramatic core. Bengochea’s portrayal of Cio-Cio San’s American sea captain husband included just enough rolled up shirtsleeves passion and dramatic heft to convince.

Initial misgivings that mezzo-soprano Michele Detwiler’s instrument would not lend itself to Suzuki, Cio-Cio San’s trusted servant, were quickly effaced by the beauty and integrity of her portrayal. Her immensely sympathetic, suffering countenance, fluid and lively movements, and fine singing in the Flower Duet were all one could ask for. Thank you.

The mellifluous voice that baritone Nicolai Janitzky brought to the American consul Sharpless was most welcome. If only he were capable of bringing more energy to his physical presence. His mostly static portrayal made quite a contrast with the grand, impacted movements of baritone Emmanuel Franco’s intentionally over-stylized Prince Yamadori.

Tenor Alexander Taite’s Goro wanted for more point, and his mild, faceless deference in the opening act seemed disconnected from the obnoxious interventionist of the close. Bass Carlos Aguilar’s wooly-voiced Bonze, sung offstage, was ludicrously portrayed by a stick-figure projection on the backdrop. Soprano Jennie Litster made for a good-looking Kate Pinkerton, but her little girl instrument suggested that she was emotionally unfit to parent Cio-Cio San and Pinkerton’s child. As that child, Trouble, Noelle Woodward reached back in time from her current status as a kindergartener to create an adorable, androgynous three year old boy.

Even before the curtain rose, Alexander Katsman dashed expectations by declaring, in his A Note from The Maestro, “Most of the people [what people?] think of Madama Butterfly as a clash between American and Japanese cultures. I think it actually says more about two people who are coming into marriage with rather different ideas and expectations … This is the tragedy that does not have its heroes or real villains.”

Katsman goes on to declare that the “biggest villain, Pinkerton, is not really a villain, just somebody who is doing what lots of American servicemen did around the 1900s.” It gets worse from there.

What rubbish! Was Katsman under political pressure to write such an intro, or does he really believe that people can be absolved of responsibility for actions that lead to misery, suffering, and death?

Regardless, Luedloff and the singers made no attempt to whitewash the opera. And Katsman, despite a most prosaic ending to “Un bel di” and several off-key pitch passages from the horn section, embraced the opera’s drama with gusto. The singing, above all King’s immensely sympathetic, moving portrayal, drove the tragedy right to the heart.

Mention must be made of the production’s vital resonance with the epic losses in Japan, which everyone who lives so close to the Livermore reactor must feel on multiple levels. Kudos to Executive Director Sara Neely and the Livermore Valley Opera Board for promoting donations to the American Red Cross at a display in the lobby. With two performances yet to come on March 19 and 20, Livermore Valley Opera’s Madama Butterfly deserves full houses.