Looking Back for a Way Forward: Jeff Scott’s Passion for Bach and Coltrane

If you went looking for Jeff Scott’s 2014 Passion for Bach and Coltrane in a record store you might find it resting accurately but uncomfortably in the Third Stream section, the theoretical halfway point between Western classical music and jazz. Scott’s piece does offer up excerpts and techniques from these two genres, but it is so much more. It also weaves in A. B. Spellman’s mesmerizing poetry, connects with John Coltrane’s spiritual journey, and fuses theater and film music styles with poetic descriptions to create a fascinating, visual experience.

Saturday’s pleasant performance by Chamber Music Silicon Valley at Santa Clara University was the West Coast premiere of the work, given in a small black-box theater with small, circular tables set up near the performers and four rows of tiered seating behind this jazz club arrangement. The prevailing mood was hipness, with performers dressed in a variety of business casual. 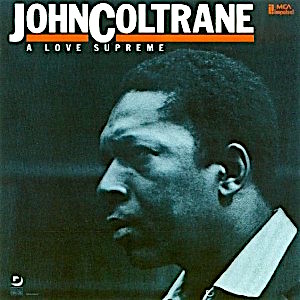 Scott’s ear-opening composition, the only piece on the program, is made up of eight movements, two named after selections from works by J. S. Bach, three referring to tracks from Coltrane’s album A Love Supreme, and three with titles from Spellman’s 2008 poetry collection, Things I Must Have Known. Each movement started off firmly planted in either a jazz or classical idiom and eventually incorporated elements of the other, often with orator Malinda Haslett speaking Spellman’s poetry.

Scott uses a wind quintet, string quartet, piano, and double bass without cornering instruments into expected, traditional roles: The bassoon gets a jazz solo and the drummer accompanies Bach’s tunes on the piano.

Chamber Music Silicon Valley stepped up to the job. Bursts of quasi-improvisatory virtuosity intermittently drew attention to Douglas Brown’s bassoon playing and to flutist and Artistic Director Ray Furuta. Pianist Miles Massicotte kept on top of the many style transitions between classical and jazz, and Haslett was nearly flawless in her delivery. Rare moments of questionable instrument intonation or gaps in ensemble synchronicity were the only performance blemishes.

The fourth and longest movement, “Out of Nazareth,” is the heart of the piece. While the scriptural title might suggest a devout mood, Spellman’s language is religious yet unorthodox, at one point portraying Christ’s supposed crucifiers, “dar[ing] him to miracle his broke ass out of this one.” Here, and throughout Scott’s work, Spellman’s poetry is the engine driving the music forward. Scott’s masterful text selection and placement is paired with dramatic musical techniques from musical theater and film, creating a sort of ear film where visuals are induced by the spoken word and poetry rather than provided by a screen or actors.

Scott’s musical and literary references are beautifully and meaningfully interwoven throughout. His Passion not only references Bach’s canonical works and the story of Jesus of Nazareth, it delves into every human’s final days. The references to Coltrane’s legacy also transcend their status as homage to a masterful jazz musician. The album Scott draws on came after the iconic saxophonist’s “spiritual awakening” and Scott places Coltrane’s pieces in reverse order, starting with “Psalm,” then “Resolution,” and finally drawing on “Acknowledgement” as the conclusion of the Passion. This sets the composition’s trajectory toward beginnings, with Coltrane’s powerful declamation of the text “a love supreme” in his opening track coming at the conclusion of Scott’s work and aligning with Spellman’s musing over the great question of life, its basis in love, and a description of the pure love given to newborns.

Scott’s riveting and hopeful work looks back in time into the histories of Western art music, jazz, poetry, and religious figures, even reading Coltrane’s album from end to beginning. But the work is powerfully forward looking: it draws on these past events with an eye on what is still to come, with a heart-full path for how to be in our new world.