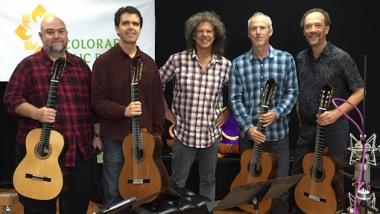 The Los Angeles Guitar Quartet brought an eclectic program of music on Friday to the Green Music Center’s Weill Hall at Sonoma State University which culminated in a stunningly expressive new composition by National Endowment for the Arts Jazz Master Pat Metheny and also included music from Renaissance Spain and Baroque Germany as well as contemporary Brazil and Australia.

Metheny, the only artist to have won Grammy Awards in 10 different categories, has been a fan of the Los Angeles Guitar Quartet since hearing their recording of his Letter From Home (on their 2004 album Guitar Heroes). When he met them at the Crown of the Continent Guitar Festival, he decided to write a composition specifically for the group. Road to the Sun is a six-movement tone poem, almost 30 minutes in length, inspired by a legendary mountain road in Glacier National Park. The piece features a mixture of folk, country, progressive jazz, and Latin styles reminiscent of Metheny’s classic work on New Chautauqua, Still Life (Talking), and many other recordings.

For Road to the Sun he decided to specifically compose for the guitar both in terms of the idiosyncratic things he likes to do with the instrument, as well as writing to the particular guitar skills of the quartet. The result is an invigorating display of guitar composition incorporating techniques of folk-like strumming, tremolo, flutter strums, percussive tapping, intricate counterpoint, striking color changes, and call-and-response textures. The piece presents a continuous emotional journey recapping Metheny’s musical career. It is tightly constructed, with musical material being repeated and transformed throughout, and in the final section the opening theme returns before a quiet conclusion. It is a major addition to the guitar-quartet literature and was received by the audience with a standing ovation and rapturous applause.

It is refreshing to hear Renaissance music on the guitar after a period of time when the repertoire was largely ceded to lutenists. Music from the Time of Cervantes is an arrangement by LAGQ member William Kanengiser of compositions by Spanish composers Antonio Martín y Coll, Juan Arañéz, and Juan del Encina chosen to illustrate passages from Cervantes’s novel Don Quixote. Raucous strumming, percussive taps on the guitar, lascivious dances, and variations on harmonic progressions colorfully illustrated Don Quixote’s adventures on horseback along with his dour squire Sancho Panza. It showcased the quartet’s ability to brilliantly blend folkloric and popular styles.

The Brandenburg Concerto No. 6 BWV 1051 by J. S. Bach was originally written for string orchestra without violins, and the lower and narrower range make it an ideal classical score to arrange for guitar quartet. Kanengiser and Scott Tennant performed the rhythmically challenging canonic writing with amazing precision, sometimes chasing each other’s blazingly fast lines at the distance of only a half beat while John Dearman and Matthew Greif provided a rock-solid foundation.

Phillip Houghton’s Opals is a three-movement work portraying various facets of Australia’s national gemstone. The Los Angeles Guitar Quartet created the impression of sparkles, floating rainbows, and glittering points of light with a wide array of tone colors made by varying the part of their fingernails that stroked the strings, the speed of those strokes, and the point on the strings that they touched. The result was mesmerizing.

For an encore, the Los Angeles Guitar Quartet performed the exceptionally fast and rhythmically surprising Tarantella by Horacio Salinas of the Latin folk group Inti-Illimani.

You may not recognize the name, but this is a special performer.

The influential guitarist and long-serving S.F. Conservatory of Music professor, David Tanenbaum, gives us a piece of his mind.

Jon Mendle has already made a name for himself in guitarist circles. His first solo recording makes an exhilarating sweep through the music of J.S. Bach’s friends and sons.