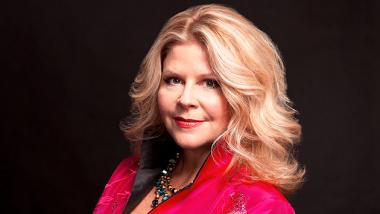 Love Rules All in Graham Recital

On a sunny first day of March, with signs of spring to be seen and felt everywhere on the UC Berkeley campus, mezzo-soprano Susan Graham and pianist Malcolm Martineau took romantic love in all its amplitude as their seasonally appropriate theme.

Much of the audience may have skewed older than the students enjoying the weather and each other outside Hertz Hall on this Sunday afternoon. But it’s safe to say that many in attendance were revisiting their own early infatuations, wide-eyed delusions, and deepening first loves during this bewitching afternoon of amorous art songs. Anyone who didn’t summon a first kiss and more to mind must not have had a pulse.

Robert Schumann’s 1840 song cycle Frauenliebe und -leben (A Woman's Loves and Life) was the occasion for this seductive Cal Performances recital. Set to poetic texts by Adelbert von Chamisso, the eight songs form a progression from love-struck first sight to physical lust, marriage, and family to loss. It was Martineau who proposed interleaving the Schumann songs with those by other composers that address the various stages of love. Grieg, Strauss, Ravel, Tchaikovsky, and Granados were among those enlisted in this refreshingly invented cause.

Singing with liquid grace, stylistic suppleness, and linguistic fortitude, Graham tapped eight different languages overall. That fact itself was one of the recital’s gratifying features – a love letter to love’s own universality and variety.

Whether she was precisely cataloging the glories of a lover’s eyes and mouth and voice in Fauré’s “Chanson d’amour,” skimming lightly over the flowing piano arpeggios of Ture Rangström’s “Melodi,” preening over a wedding ring in Schumann’s “Du Ring an meinen Finger” or floating a sublimely heartsick summons to a distant love in Berlioz’s “Absence,” Graham went to the heart of the matter. Through it all a shining, exquisitely crafted tone prevailed. For all the heat in the lyrics, Graham molded emotion with a telling, light touch rather than dynamic extremes, overly dramatic phrasing, or theatrical gestures and expressions.

The female speaker of Schumann’s cycle supplied the lattice-work for love’s winding development through the years. In the composer’s first song, translated as “Since I saw him,” Graham conveyed, with breathy eagerness, the moment when desire strikes. Then, in “He, the most wonderful of all,” she used perfectly pearled ornaments to suggest the heightened, luminous clarity of her perceptions. “Just to watch your radiance,” she marveled. “Just to watch it in humility.”

The wind-swept phrases in “I cannot grasp it” blew by in a brief, gusty windstorm. In “Help me, sisters,” which takes place on the wedding day, Graham underscored the giddiness of the occasion with a sense of gravity. She followed it with two of Schumann’s “Bride Songs,” both touchingly addressed, with a kind of poignant look over the shoulder, to the bride’s mother.

In the second half of the program, the song order of each section was reversed: the Schumann songs followed rather than preceded those of the other composers. That meant that the recital ended not in the raking grief of Granados’ “Oh, cruel death” but with the achingly spare meditation of Schumann’s “Now you have caused me first pain.” Martineau, whose sensitivity served every nuance and shift of mood, fittingly got the last word, in a poignant piano coda.

As it was, Graham filled the afternoon with sweetness, love-sick dreams, laughter (Poulenc’s “The Baby Carafe”), the joys of motherhood and a swoon of sadness. Love, from beginning to end, flowed onward.