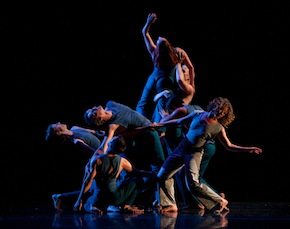 The Lovely Bones of a Greater Corps

In Times Bones, on view at the Jewish Community Center of San Francisco over the weekend, you get more than what its creator Margaret Jenkins terms a preview. The big piece, with a different score and a larger set, will unfurl next spring to mark the Margaret Jenkins Dance Company’s 40th anniversary; but this you feel already luxuriously full of everything you might expect from the master choreographer. The ingredients, she says, are “movement, language, music and projections,” but as in any creative success, the whole is far greater than the sum of its parts.

The piece had a seven-minute prologue in the JCC’s atrium, the dancers moving in Alexander V. Nichols’ environment of lighted, angular pathways that looked particularly interesting when viewed from the balconies above. Then the show and its audience moved into Kanbar Hall.

Paul Dresher has composed a sound collage of pieces by himself and others made for the company over the years. For the stage portion of the show, Nichols has ingeniously fashioned a light-film-space-scape, if we could call it that, and projections of dancers past flicker by, white on black, like dream fragments in the dark. Later, the set, which is divided into squares like an egg crate, folds back on itself to suggest a house at one side of the stage, now brightly lit.

Against, and within, and emerging from all this there are the MJDC’s eight superb “dancer/collaborators,” as Jenkins calls them, costumed by David Draper in casual dancewear of bright color. The choreographer, 50 years in the Bay Area and almost 40 of them with her own company, touches on the past performers and performances to cue up what is now and what might lie ahead. The onstage movement is vital and energetic.

As with the body, so the spirit. These artists are, to coin a cliché, a breath of fresh air. Jenkins and her company create a sense of liberation without resorting to play acting or gimmickry. In this sense the work, for all its virtuosity (which has evolved in dancers from generation to generation) is classic. This is certainly no insult to Jenkins, who sprang from the Judson Church ferment of New York’s modern dance scene in the 1960s, danced and taught for Merce Cunningham, and was a member of Twyla Tharp’s original company, in addition to working with many other leading figures of the era. As filtered through Jenkins’ vision, postmodernism’s staying power and resilience seems to constitute the throughline and theme of Times Bones — to be continued come spring.