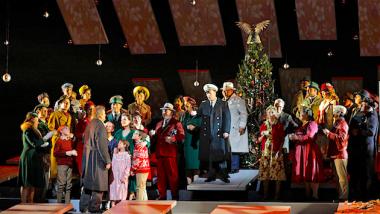 Composer Jake Heggie is something of the Steven Spielberg of American opera. He’s a safe box-office draw — his 2000 breakout Dead Man Walking and 2010 “blockbuster” Moby-Dick are regularly programmed at major houses (you can see the latter at Opera San José in February). Heggie’s works are designed to appeal to a wide audience; listeners who bemoan the state of contemporary opera always walk away satisfied. There’s a certain cinematic familiarity in both his musical language and choice of subject matter.

So in an era when operatic adaptations of cinema have become the norm, it’s unsurprising that Heggie would turn to the silver screen for inspiration. And not just any movie, but the holiday classic. His 2016 It’s a Wonderful Life, presented in its West Coast premiere at San Francisco Opera on Saturday, brings to musical life Frank Capra’s life-affirming film — that most-hallowed of Yuletide tales that long ago supplanted A Christmas Carol (and maybe even the Nativity ...).

But let’s get one thing straight: you have to accept this opera on its own terms. If you’re expecting a game-changing work like Thomas Adès’s Exterminating Angel — another film-based opera from the same year — you’re going to be disappointed. It’s a lot easier to appreciate It’s a Wonderful Life if you approach it like you would the original film (or any Spielberg flick, for that matter) — as a solidly constructed and heartwarming bit of family entertainment.

There have been some inevitable changes made to the story in transferring the action to the operatic stage. Likely to make up for the lack of female lead characters, librettist Gene Scheer changed the wingless angel Clarence into “Clara.” She’s no longer a disembodied voice, as Clarence is for much of the film, but an ever-present guardian who is invisible to the human characters.

South African soprano Golda Schultz was absolutely charming in the role, with her infectious smile and animated facial expressions. And she possesses an appropriately angelic voice, releasing twinkling cascades of coloratura from atop her rope swing as she counted the prayers of Bedford Falls. But while Schultz helped to fill out some of the ensemble numbers, her character became a superfluous tagalong during the middle portion of the opera. And Scheer saddled her with an embarrassingly juvenile bit of stage action — a magic hat that freezes time.

Mercifully, the librettist cut little Zuzu Bailey’s corny line about bells and angels’ wings, which has become something of a joke after decades of parody. Though bells did play a big part in Heggie’s score. In fact, the composer re-wrote the prelude for this revised edition so that it would sound more “Christmassy.” As the curtain rose, a chime motive derived from the iconic Westminster Quarters rang out over warm, unison strings. This instrumental combination reappeared in the opera’s finale, joined by a mellow horn solo that conjured a Salvation Army brass band.

These are the typical musical markers of the Yuletide that appear again and again on the soundtracks of holiday television specials — they’re guaranteed to arouse feelings of nostalgia. But you can’t fault Heggie for turning to these more obvious evocations of the season; the audience expects to hear this kind of jingle-belling in what is, ostensibly, a Christmas opera. However, Heggie employs this wintery tinta sparingly; after all, despite the tasteful evergreen garlands in the War Memorial lobby and the “Auld Lang Syne” singalong at curtain call, It’s a Wonderful Life has very little to do with Christmas.

For the most part, Heggie’s score combines lyric elements of various “accessible” genres: classic film scores, Richard Rodgers and Frederick Loewe musicals, late-Romantic operas. Again, it’s easy to snobbishly dismiss his style as “middlebrow,” but the composer has produced some genuinely lovely music here. The two love scenes between George and Mary stand out, the characters’ expansive vocal lines recalling Mimì and Rodolfo’s Act I duet from La bohème. And the final chorus — a brief, carol-like number — was moving without being tear-jerking. Heggie also incorporated some local color where it’s needed, including a convincing pastiche of those sentimental, turn-of-the-century school songs for the Bedford Falls High alma mater. But the recurring, big-band-style “Mekee-Mekee” — a Fiji-inspired jitterbug that George invents — was painfully obnoxious and cringe-inducing (as were most attempts at humor in the opera).

Tenor William Burden brilliantly captured George Bailey’s progression from dreaming idealist to suicidal cynic. He has a more virile vocal timbre than the soft-spoken Jimmy Stewart, which lent the role a passionate, Italianate quality — especially when he slid longingly into Puccinian top notes. But for George’s violent outbursts at his family, Burden’s embracing tone harshened into a gruff, sarcastic belt. Heggie heightened the tension in the accompaniment by subjecting “Hark! The Herald Angels Sing” (which George’s daughter had been practicing at the piano) to an ascending series of jarring modulations. This existential-crisis scene was one of the few moments when the work broke free from its inoffensive, cinematic sound world and became truly operatic, approaching the psychological complexity of Peter Grimes.

Andriana Chuchman’s fluttering soprano was well-suited to the role of Mary; with her unaffecting, girl-next-door delivery, she beautifully conveyed her character’s admiration for George in their proposal duet. As the miserly Mr. Potter, Rod Gilfry looked uncomfortable strapped to a wheelchair for the duration of the drama; while I loved the acidic tone in his snide comments, Heggie and Scheer made the banker too cartoonishly evil, like the Mr. Magoo version of Scrooge (Gilfry even exclaimed “Bah!” at one point). Tenor Keith Jameson is adorably dopey as the dim-witted Uncle Billy, and as George’s war-hero brother Harry, Joshua Hopkins shows off a robust baritone and exudes an all-American confidence. The quartet of top-ranking Angels First Class (Sarah Cambidge, Ashley Dixon, Amitai Pati, and Christian Pursell) performed admirably in mid-air, suspended by wire harnesses; Heggie wrote some of his best music for them, and the singers blend exquisitely in full-bodied, hymnal harmonies.

Patti LuPone made an unexpected guest appearance as the celestial voice (of God?) that addressed Clara; her pre-recorded spoken dialogue was turned up too high, however, making the unamplified singers sound muted by comparison. The audio was better executed during the alternate-reality sequence of George’s non-existence. Heggie made the bold move not to set this portion to music; spooky electronic soundscapes and echoey vocal filters effectively communicated the dull emptiness of a George-less world. The reentry of the San Francisco Opera Orchestra, conducted with festive energy by American-opera specialist Patrick Summers, came off like the vivid technicolor transformation in The Wizard of Oz.

Director Leonard Foglia was careful not to slavishly reproduce the film frame-by-frame in his production, though there are a few points that don’t translate smoothly to the theater, notably the scene when Mary and George fall into the high-school pool. His staging is slightly reminiscent of Monsters, Inc. — set designer Robert Brill placed a couple dozen white doors across the raked stage, with just as many hanging above. These served as Clara’s entry points into George’s memory, but also doubled as a patchwork “screen” for Elaine J. McCarthy’s projections of stars and psychedelic rainbows. These backdrops supplemented the production’s gorgeous tableaux, which included the uplifting final number: the S.F. Opera Chorus, decked in their “gay apparel” (attractive L.L.Bean-style sweaters in burgundy and forest green, designed by David C. Woolard), joyfully reiterated the work’s message as a shower of golden glitter rained down behind them.

While it left me with the warm-and-fuzzies, I highly doubt this opera will join Messiah, The Magic Flute, and Hansel and Gretel as a regular Christmastime tradition. Unlike A Christmas Carol, It’s a Wonderful Life doesn’t lend itself to adaptation — in the public imagination, George Bailey’s story is inseparably tied to the film (and hardly anyone is aware of the original Philip Van Doren Stern text). While it’s possible to extract the screenplay’s basic plot and rework it for the stage, black-and-white footage of Jimmy Stewart and Donna Reed will always linger in the back of the audience’s mind. Nevertheless, Heggie’s opera is a curiosity that’s worth checking out if you’d like a change of pace from the usual holiday concert fare this year. Otherwise, the 1946 film is available for streaming on Amazon Prime.

Here’s an operatic comedy that will leave you feeling good about humanity.

If the prolonged cheers and standing ovation of the opening-night audience
are any indications, the outlook for Jake Heggie’s latest opera Moby
Dick is smooth sailing.