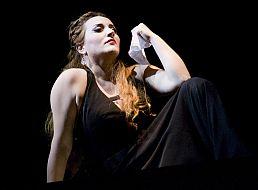 Kathryn Miller on November 20, 2007
Sometimes, a story is so universal that it can be updated without affecting the integrity of the drama. San Francisco Opera’s deeply problematic production of Verdi’s Macbeth, which debuted last Wednesday, proved to be one of the exceptions. Shakespeare’s tale of greed and ambition leading to ruin can stand up to changes of setting and time, but David Pountney’s staging, directed here by Nicola Raab, left the opening-night audience troubled and confused. The curtain opened on a female chorus, presumably the witches, dressed in red and in every imaginable style, and playing with a strange assortment of props, the likes of which the War Memorial Opera House stage has rarely seen. The women held stereos, played with egg beaters, and remarkably, constantly hula-hooped (yes, while singing). Besides contributing an incredible amount of noise, these objects were a troubling sign of things to come. The set consisted of gray, concretelike walls that swooped down toward stage left, and a gray box that moved and turned to represent various locations. Unfortunately, any action that occurred inside the box was only visible to those seated in the center of the house. The shock of seeing King Duncan’s dead body was therefore only shocking to a small portion of the audience.

The stage resembled a set from Star Wars, and my immediate association was strengthened when Macbeth (Thomas Hampson) made his first entrance bearing a striking similarity to that film’s Lando Calrissian. Just when I thought I might be overreacting, Banquo entered with several soldiers whose molded-plastic breastplates and futuristic helmets brought to mind Darth Vader’s storm troopers, though clad in black rather than white. Lady Macbeth’s initial absurdity may be chalked up to workplace safety. It was nonetheless distracting to watch Hungarian soprano Georgina Lukács, standing on the 10-foot-tall box, grapple with the safety line to which she was tethered. At the outset, it seemed that Lukács’ awkwardness was due to the thick black rope tying her to the box. As the first act progressed, however, it became apparent that she lacked any grace of movement. Every step seemed labored, and acting was limited to swaying and holding her head. Indeed, I wondered about her interpretation of the character. Shakespeare and Verdi gave us a woman of incredible strength and ambition, who slides into madness while desperately trying to hold herself together. Lukács, however, seemed unhinged from the outset, eliminating any chance of character progression. Her stage direction was also a hindrance. Lady Macbeth’s fierceness, quite an anomaly for a female character of the time, was cheapened by a series of bizarre pseudosexual reactions to the many murders.

Sadly, her singing did not help. While the upper reaches of her voice displayed glimpses of a bright, silvery tone, the other registers were unfocused and her vibrato had a clearly apparent wobble. Lukács’ voice does not seem inclined toward movement, so quicker passages and occasional decorated lines dragged behind the orchestra.

Hampson, on the other hand, was in fine vocal form. He sang with great clarity and line, displaying none of the woofy quality that I have heard in his voice recently. His Macbeth was strong and commanding, becoming thoroughly unnerving as his visions and paranoia took over. The singers in supporting roles were particularly exciting. As Banquo, Raymond Aceto displayed a dazzling tone unusual in a bass. His Banquo had warmth and humanity, and was particularly touching as he convinced his son Fleance (Ben Seigel) to escape just prior to his murder. Alfredo Portilla was forceful and determined as the avenging Macduff. Adler Fellows Noah Stewart (as Malcom, son of the murdered king, Duncan), Elza van den Heever (as the Lady in Waiting), and Jeremy Gaylon (as the Doctor) made the most of small parts by singing with wonderful legato, color, and grace. The cast also featured several children, among them the second and third Apparitions, sung by Josephine Hicks-Jablons and Jack Gorlin, both of whom showed poise and much promise. Guest conductor Massimo Zanetti was somewhat less successful. Although lauded for his interpretation of Verdi, Zanetti turned in a perfunctory performance this time out. The evening seemed to pass at a constantly brisk pace, and there was little in the way of nuance or color from the pit.

In letters to his librettists, Verdi emphasized a need for concise action and strong, forceful lines. His quickening of the play’s pace means that the characters have little time to evolve. There are fewer opportunities to emphasize the increasing guilt and madness of the main characters. Thus, the stage director and singers need to make the most of the time given. Instead, Pountney seemed intent not only on distracting his audience, but also underestimating its intelligence. In Macbeth, atmosphere is hugely important to the psychological drama. Indeed, the chaos and disorder that take over minds and the realm are almost characters in themselves. It is when the natural world telegraphs the turmoil of Macbeth’s mind that he succumbs to madness and the drama is at its climax. This descent is rendered meaningless if that chaos exists from the outset. Attempting to explain away the insanity of the production, an interview with Hampson in the program notes tells us that Pountney’s (misguided) point is to give us "surreal" use of materials that are unconnected to the action in order to highlight the way in which the main characters are finding their fates in a society with which they have no relationship. The messy and completely disjointed result, however, precludes any insight into the characters. If the goal was to heighten the drama, the director made a wrong turn and hit an asteroid belt. His confusing, ridiculous production managed to completely eviscerate the natural, thrilling tragedy that Shakespeare and Verdi have given us.