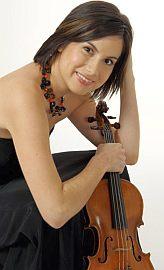 Jeff Dunn on November 25, 2008
Halloween has long gone, but Berkeley Symphony music director candidate Paul Haas arrived wearing a disguise Thursday night at Zellerbach Auditorium: that of a competent, careful, and traditional wandsman with barely enough energy befitting his relative youth (37). Appearances suggested someone who would make no waves, do a good job with the three B's, dabble in some contemporary music here and there — and be utterly predictable. But then in the midst of the last movement of the last piece on the program, Tchaikovsky's Fourth Symphony, a glimpse of Haas' true colors came through, enough to rethink the entire performance and conclude that the man has the potential to be a great conductor, and a radical one: just what Berkeley needs. After all, Haas is the guy who helped devise the Sympho "Rewind" concerts in New York and San Francisco, where the music goes backward in time from the present to the 1600s, where there is no intermission, and where, according to the Sympho Web site, "Gone are the barriers separating orchestra from audience. Gone is pausing-between-pieces stuffiness. ... Pieces are linked by new acoustic and electronic music composed specifically for the concert." In January, SFCV's Jessica Balik wrote that the innovation appealed to a younger, "multitasking" generation, but might be a barrier to traditional listeners wanting to focus intently on longer works. Haas has said, "I've got this list of hundreds and hundreds of ideas that I'd like to try out." Rather than fling them in Berkeley's face, he concentrated instead on proving that he had the chops in three traditional areas of concern: leading an orchestra, building a standard program, and communicating to the audience both physically and orally. He succeeded in all three, yet, compared to some of the previous candidates for the position, was only exceptional in the first, but essential, skill. Frankly, I have seldom heard the orchestra play better than under his baton. This might mean that the orchestra likes him and that he knows how to focus rehearsals — essential traits for the next music director.

So what did Haas have under his seemingly ordinary attire? Most of all, he has the gift of seeing the big picture. I was initially frustrated by his slower-than-average tempos in the first three movements of the Tchaikovsky symphony. There was a hint of what Haas was up to in the first movement, when he increased the tempo slightly in the climax, making it all the more effective in contrast with the earlier material. But his superfast finale brought home the bacon; this time the contrast made the notes leap off the page, the orchestra played with aplomb, and at the conclusion the audience rose with tremendous cheers of excitement. Haas is the youngest conductor I have heard who could probably do the massive symphonies of Anton Bruckner justice. Furthermore, it's not just instinct that makes Haas successful. It's hard work — and hard work in the right places. Haas studied the Tchaikovsky score so thoroughly that he conducted it from memory, gave a short lecture to the audience about its relationship to Beethoven's Fifth Symphony, and even wrote the program notes for the work. Haas also incorporated some unusual rubatos and accelerandos not found in the score's finale that were highly effective. He knew he'd be remembered more for the last piece than the first. But the first piece, Joshua Penman's nine-minute Songs the Plants Taught Us, revealed more about Haas. A composer himself, Haas has cultivated partnerships with composers who are not merely following a particular school (thankfully, all are permissible now in our postmodern musical times), but are synthesizing many traditions into something new. Penman’s work impresses in this regard: He takes a few arpeggios from minimalism, adds a drone bass line and melismatic upper voices from Indo-Arabic traditions, and combines them all into some spanking, at times dissonant, Western harmonic progressions. The result is a terrific piece that deserves wide circulation. In case you're wondering, Penman's music, according to the program notes (and Haas' comments from the podium), is inspired by Amazonian shamans who believe they learn special songs from plants. Penman modestly informs us that "While the piece is influenced by the music of ancient and recent ritual cultures far from the Amazon basin — from the deserts of the Middle East to the dance floors of Europe — it is also about learning and singing a song that allows us to speak to the gods." Haas wisely remarked, however, that the story behind the music is only an option for listeners, and not required for appreciation. I agreed heartily, even as Penman came up onstage after his piece was played to acknowledge well-deserved accolades — sporting a pointed beard and a fancy Sherwani jacket fit for a pasha. The remaining work, which finished the first half of the program, was Samuel Barber's Violin Concerto. The soloist was Danielle Belen Nesmith, a recent graduate of the University of Southern California Thornton School of Music. Her performance, while acceptable, was unfortunately a bit disappointing. She has the potential for producing very fine tone, and was always on pitch. However, every so often she would mistakenly scrape a note. Worse, she exhibited a repertoire of gestures that struck me as inorganically grandiose, especially one where she raises her elbow above her head on a phrase-ending upbow. Her pursed lips may have reflected an underlying nervousness that might have contributed to the gestures' artificiality. Surely these mannerisms will subside with experience, and I look forward to her growth as an artist. Where Nesmith shined was in the difficult last movement, which she carried off with style, though leagues behind what Hilary Hahn can do with it. As far as the conducting went, Haas again used his slow-first-then-faster-at-climaxes strategy to some effect in the first movement, but I felt that both it and the heartbreaking second movement could have used more passion. Perhaps Haas was holding back reserves for the Tchaikovsky. If I had known then what Haas would do later with Peter Ilych, I would have shouted, "Take off your disguise now, Paul. Hit Barber with all you've got!"