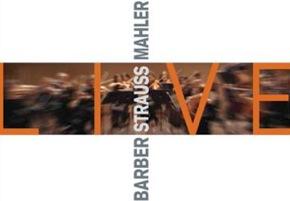 “The idea for this album came to me quite by surprise,” writes Nadja Salerno-Sonnenberg of the New Century Chamber Orchestra’s new CD. She was listening to an archival recording of the group’s first performance of Richard Strauss’ Metamorphosen, and realized that it was good enough to design an album around. Disdaining “diversity,” and favoring continuity, she bracketed it with Barber (his Adagio for Strings) and Mahler (the Adagietto from his Fifth Symphony), also live recordings, for NCCO’s second album.

She was right enough about the Strauss: The Metamorphosen is magnificent. Salerno-Sonnenberg and her orchestra have every right to be proud of it.

The piece is sui generis — half chamber music, half orchestral music, and blurring the lines in a way no one has done as successfully before or since. Both halves are uncommonly difficult. In ordinary music, whether chamber or orchestral, you’re sitting near the person you’re trying to blend with. In Metamorphosen, you might be partnering (or doubling) someone 15 feet away, with a few people playing completely different parts in between. To connect up as you must is something no conductor can do for you; you can’t play this thing at all without sustained, concentrated musicianship.

Shaping the whole is a different sort of problem, though, and this is where NCCO has worked a kind of miracle. You could swear that there was a guiding hand here, and yet it must have been more like a collective intelligence. The music admits of so many possibilities for individual self-aggrandizement that it’s amazing to hear it played, conductorless, with so much passion and yet also with so much attention to what happens over minutes-long spans.

And the individual performances — all of them — are spectacular. I wrote once before about Salerno-Sonnenberg that I thought she might incite these players to great things. She certainly did so here; for one example, you can hardly tell without a score which of the teeming violin solos are hers, which those of her hitherto brilliant, disciplined, but not especially demonstrative band.

The Barber and the Mahler aren’t quite on the same level. In large part, I think, that can be put down to questions of scale.

The Barber Adagio was originally the middle movement of a string quartet. In that guise it’s excruciatingly strain-filled music. The long slurs, the spare texture, and the “Molto adagio” designation mean painstaking (and painful) bow-husbandry, the kind that takes both mental agonies and physical cramps to bring off.

In most music that “modern” classical musicians play, a quarter note is a standard beat, and there are many notes shorter than that. In the Barber, there is no note shorter than a quarter note, and the long notes are very long indeed. I’d wager that the vast majority of classical string players never saw a double whole note before they encountered the first two bars of the Barber, and that most of those haven’t seen one anywhere else. I used to be puzzled by the notation, but it seems obvious now: Barber was trying to make players “think slow,” see every one of those shortest notes as a full quarter, and give every note the weight they’d give a beat in any other music, while the long, long slurs say, “but also think of the line!”

Doing both these things at once is hard, unbelievably hard, for four players. If the rest of the Barber quartet had been as fine as his Adagio, more quartet ensembles might have tried, but it became obvious early on that the piece was destined for string orchestra. With a full symphonic string section, such as that of Toscanini (who first popularized the orchestral version), there is still strain, but it doesn’t have to do with rationing bow so much as rationing power. With enough players, all can change bow freely and it won’t be heard, so the sound can be sweeter and richer.

Also, you can play the work much more slowly. (Toscanini himself didn’t; his seven-minute rendition is by modern standards indecently fast.) NCCO’s is about nine-and-a-quarter minutes, which is to say in the modern full-symphony-strings ballpark.

The trouble is that a small chamber orchestra has neither the string quartet’s advantage of “look, this is serious hard work” nor the big string section’s advantage of effortless blend and seamless long phrases. It’s still hard work, but it can no longer afford to sound it.

In music that needs unanimity and blend, NCCO is beset with individual voices that stick out (the leader’s not least, I think); in music that needs some sort of entente cordiale over vibrato, there’s no agreement within sections; and at the climax, there are so many bow changes accidentally happening at almost the same time that it sounds as though the music has written, irregular accents in it.

The best playing here is the few quiet bars after the climax: perfectly balanced, calm, judged with care, and altogether spellbinding.

The Mahler presents something of the same scale problem. Does it really make sense to excerpt a movement from a larger work and play it with a string section that would be ridiculously small in the rest of the piece? It does work surprisingly well here. The blend is much better than in the Barber, and there is touching detail of inflection. And while a couple of strange and unexplained deviations are made from Mahler’s obsessively detailed score, it’s all exceedingly beautiful. I wish I’d been there.

Even for studio recordings, it’s customary for CD releases to give recording dates and venue; for live releases, it’s practically obligatory. That information is nowhere here, though anyone who follows the ensemble can tell that the Strauss is from November 2009, and the Barber and Mahler are from May and September of this year, respectively. There’s no indication that all the personnel listed didn’t play all the music, though NCCO’s normal complement is 18 players, and I’d bet that that was the size of the string band for both the Barber and the Mahler. And while Salerno-Sonnenberg’s liner note makes clear that the release of the Strauss was an afterthought, so that that performance was without what she calls “the usual preparations,” she says nothing about the other two, later performances, apart from that they were also live.