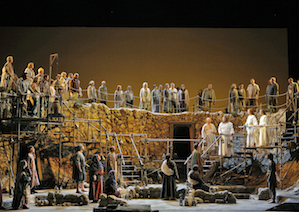 Mark Adamo's new opera, The Gospel of Mary Magdalene, opened Wednesday at San Francisco Opera. Given the strength and popularity of Adamo's previous operas, Little Women and Lysistrata, there was every reason to hope for another big success. But a fine quartet of leading singers and excellent musical leadership could not overcome a muddled and wordy libretto, inept staging, and a splashy, but ultimately unmemorable, score.

A great deal of research into early Christianity and its discontents went into the creation of the opera, whose libretto, based on the gnostic and canonical gospels, comes with 116 footnotes and a bibliography. And yet, all that work failed to result in a singable libretto with a compelling story line.

Instead, multiple stories compete for stage time, and consequently none are put across with sufficient clarity or conviction. Adamo takes on a romance (and eventual marriage) between Yeshua (Jesus) and Mary, the transformation of Yeshua's religious philosophy because of Mary, his role as a political threat to Roman rule, and the conflict between his closest disciples, Mary and Peter. These stories could make a great novel, but they are too much for a three-hour opera.

The libretto and staging are further hampered by an unfortunate framing device. The opera opens with a group of modern Christians, referred to as the Seekers, rebelling against the sexist story of the canonical gospels. They hear of the discovery of the gnostic gospels, and magically, they're watching the events of Yeshua's life unfolding before their eyes in an archeological dig. The Seekers are in modern dress, yet they participate in some of those events.

David Kornis' unit set is a cramped and ugly obstacle course combining ancient ruins and modern temporary staircases. It's a miracle that the cast is able to negotiate the set without tripping over it. And what a distraction! No sooner do you settle into the ancient world than the sight of blue jeans and modern scaffolding yanks you back to the 21st century. The chorus, positioned mostly atop the set and in modern dress, narrates far too much of the action. Show, don't tell, or you risk taking the audience right out of the story.

Great music could make up for the weak libretto, but Adamo's score falls far short of the mark. He orchestrates colorfully, making good use of the large ensemble. Despite all the color, and despite some use of character-specific motives, the music is remarkably bland and unmemorable. What sticks most in the memory is the overly sweet and generic nature of melodies. Some welcome dissonance enlivens the opening, and the Greek-language chorus that accompanies the crucifixion is far and away the most powerful and effective music in the score.

The leading singers and the chorus provide the greatest pleasure in an often-frustrating show. In her SFO debut, Sasha Cooke leads the way, bringing a sumptuous, glowing mezzo-soprano and commanding musicality to the title role. Steely or tender, her Mary is a complex woman seeking fulfillment of the spirit and of the flesh, and finding it with the rabbi Yeshua.

Baritone Nathan Gunn, who has created roles in a number of new American operas over the last decade, is a puzzling choice for Yeshua. He's handsome, and he looks good in a beard and a caftan. But the earnest and appealing stage presence that makes him an ideal Billy Budd or Papageno works against him in a role that demands more draw-the-eye charisma and stature. On opening night, he sounded underpowered, his soft-grained voice sometimes spreading at higher volumes and unable to cut through the big orchestra, and he doesn't physically inhabit the role as you would want.

There's also not a heck of a lot of chemistry between Cooke and Gunn, at least as directed by Kevin Newbury. Yes, there's a bedroom scene of sorts, though you'll be disappointed if you're expecting a glimpse of Gunn's famously muscular torso. It's surprisingly cool and underplayed, and so is the relationship between Mary and Yeshua throughout the opera. You're just not persuaded that it's a transformative relationship for the couple and for Yeshua's religious philosophy. And overall Newbury's direction is weak, with interactions among the characters lacking specificity and emotional persuasiveness. Surely he's not helped by the fact that the set so restricts the characters' physical scope, but he does little with them when they're inches from each other.

Most of the emotional heat in the opera comes in the music for Miriam, Yeshua's mother, sung by soprano Maria Kanyova, and Yeshua's disciple Peter, played by tenor William Burden. This Miriam, so named to avoid confusion with Mary Magdalene, isn't a virgin and isn't blessed. Instead, as implied in various texts, her son is a bastard, the offspring of a lover to whom she wasn't married, and everyone in Jerusalem knows it. She's deeply guilty and pained for her son, who resents and rejects her. Kanyova, last heard here as Pat Nixon, touchingly projects Miriam's fragility, and her strength, and she and Mary form an alliance supporting Yeshua.

For Peter, the most conflicted character in the opera, Adamo has composed jagged lines high in the tenor range. They're well-suited to Burden's big, bright voice. While Gunn looks more like the traditional image of Jesus, Burden's artistic personality is better suited to the character, and this opera might work better if the two singers switched parts. And Peter's role leaves a few questions open. The libretto and staging strongly imply that Peter doesn't just love Yeshua, but is in love with him. If this Peter is homosexual, perhaps this is supposed to account for his otherwise-unexplained hatred of women and warnings that Mary will destroy Yeshua and his movement. She doesn't. Meanwhile, Miriam warns Mary that Yeshua will destroy her. He doesn't, either.

All of the smaller roles are ably sung, by Adler Fellows and other young singers. Daniel Curran and Brian Leerhuber made a striking and harmonious pair of Roman policemen. Baritone James Creswell, who is also appearing memorably in Tales of Hoffman this summer, was a standout as a Pharisee, singing with more point and volume than Gunn. Ian Robertson's Opera Chorus sounded a bit underrehearsed at the beginning of the opera, but came into their own early in the first act, singing with their customary power and conviction.

Constance Hoffman has designed beautiful and colorful ancient costumes; would that she had been spared putting most of the people on stage in modern dress. Christopher Maravich's lighting design provides a suitably baked look and some strikingly beautiful effects at the most dramatic moments of the score. In the pit, debuting conductor Michael Christie does a terrific job of balancing the big orchestra with the voices and making the opera sound as good as it possibly could.