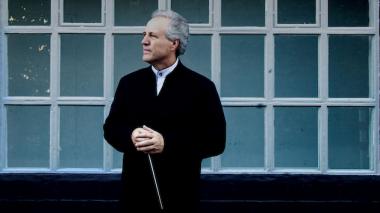 Manfred Honeck Concocts a Frothy Concert With the S.F. Symphony

Into every long season of concerts some rain is bound to fall. That’s what happened to the Feb. 22–24 trio of concerts by the San Francisco Symphony at Davies Hall.

When guest conductor Daniel Harding withdrew earlier in the month, citing an unspecified injury, Pittsburgh Symphony music director Manfred Honeck stepped into the breach to conduct. The change on the podium was accompanied by a significant alteration of the program. Only the Piano Concerto, with soloist Lars Vogt, remained on the all-Schumann bill Harding was slated to lead. Instead of that composer’s Overture to Genoveva (his only opera) and the Symphony No. 2, listeners got a frothy sampler of Franz von Suppé, Johann Strauss, Jr., and a curiosity by Josef Strauss. It was a lot of dessert, without much in the way of a main course.

While it’s only polite to consume what’s in front of you and not fret too much about what’s not, the Harding-to-Honeck shift was a bit of a head-scratcher. Whatever it was that compelled Harding to bow out here did not stop him from conducting the Royal Concertgebouw Orchestra of Amsterdam in two programs at Carnegie Hall the week before.

But never mind. Honeck it was to be, and he was a genial and engaging master of ceremonies. His big, clear beats, vivid demeanor and generous way of calling out individual players and sections during the applause on Friday night were all winning attributes.

The musical results, in both the evening’s uneven contours and executions, were considerably less satisfying. After a colorful but oddly flaccid reading of von Suppé’s Poet and Peasant Overture, with the conductor and musicians not always in clear accord, things ground to a halt to get the piano onstage. That took almost as long as the nine-minute running time of the opening number.

The famous Piano Concerto is one of those warhorses that keeps rewarding another ride. With its taut and dramatic bonding of the solo and orchestral lines, the piece draws the listener into a keen, expansive exchange between two richly characterized elements.

Vogt launched into the piano’s opening figure with rhythmically coiled energy. The orchestra responded in kind at first, only to lose its connection to the soloist at times. Balance was a problem, with the soloist swallowed in a thicket of sound. The light broke through gorgeously in the piano’s conversation with the woodwinds, a quietly ravishing high point of the evening. The first movement closed in a rush, with Vogt tearing through the cadenza as if he couldn’t wait to be done with it.

And so it went in the following two movements, with passages of musing insight and arresting phrases taking turns with detail-blurring bluster and speed. The closing Allegro offered some potent effects, with Vogt leaning into the passagework accents and powering through the big keyboard-spanning octaves and chords. By positioning the first and second violins across the stage from each other, Honeck achieved some lively separation of voices that conventionally seated configurations might not have revealed.

But again, as the concerto barreled toward its conclusion, velocity and volume seemed to be the defining forces of this sometimes exciting, intermittently tender but too often pedal-to-the metal performance. Honeck left a similar impression in October, when he conducted the San Francisco Symphony in an excitingly brawny if overly assertive program of Prokofiev and Dvořák.

New Year’s Eve came either late or very early with the all-Strauss second half of the program. Running times ranged from two to nine minutes for the seven pieces and one encore. Johann Strauss, Jr.’s Overture to Die Fledermaus was first, in a high-contrast reading enlivened by elastic tempos, plush melodies, abrupt outbursts, an occasional stumble and a snare drum determined to be heard. (The percussion overplayed their hand several times in these pieces.)

Brother Josef Strauss was represented by a single number, the S.F. Symphony premiere of the 1866 polka mazurka The Dragonfly. After some buzzing about by the violins, the piece drifted through a middle section and back to the buzzing in forgettably aimless fashion,

Then it was back to Strauss, Jr. for four polkas and the Voices of Spring waltz. Honeck and the band took an aptly unserious approach, from the swooning glissandi and cartoonish finish of the Furioso polka to the bird sounds and tooting hornpipe of In Kraken’s Wood. Best in show was On the Hunt, ebullient, suavely phrased, and self-amused.

Lest anyone think this was more than a busman’s holiday, some of the musicians broke out umbrellas for the Thunder and Lightning polka. An anvil was rolled onstage, festooned in Warriors gear, for the Feuerfest (Fireproof) polka encore. With that a night to be enjoyed here and there if not likely to be remembered very long, was over.

The renowned conductor is in town for Tchaikovsky and Shostakovich with the S.F. Symphony.