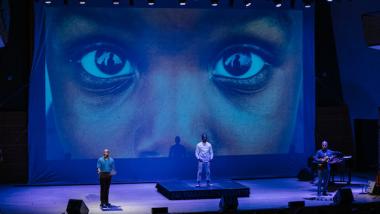 The extended standing ovation that followed the performance of The Just and the Blind on Saturday, Jan. 18, confirmed that those in attendance had gotten what they wanted. The predominantly white audience at SFJAZZ’s Miner Auditorium had enjoyed slightly more than an hour-long multimedia presentation about prejudice and parenting, created by African-American poet and spoken word artist Marc Bamuthi Joseph, in collaboration with composer and musician Daniel Bernard Roumain (DBR) and vocalist Lalin St. Juste — both, like Joseph, of Haitian ancestry — and Drew Dollaz, an African-American dancer of Barbadian origin.

That this show sold out its commissioned premiere at Carnegie Hall last March may testify to Joseph’s reputation. He’s a 45-year-old TED Global Fellow raised in New York City who later relocated to the Bay Area, where he represented San Francisco as part of a national championship slam poetry team and within the past decade served as an administrator of the Yerba Buena Center for the Arts and as poet laureate at SFJAZZ. His chamber opera, We Shall Not Be Moved, was created (also with Roumain as composer) for Opera Philadelphia and deals with the deadly bombing of a black-liberation group in that city in 1985. In 2019, Joseph became vice president and artistic director of social impact at the Kennedy Center, although he retains a residence in Oakland and a palpable hometown affinity with some of those in the SFJAZZ audience.

Except for a few YouTube videos, I was little acquainted with Joseph’s work before seeing this show, which impressed more in its whole than in most of its parts. As an innovative performer, Dollaz was the most impressive. He appeared at the beginning of the show crouched center stage and then rose to act out the elements of Joseph’s on-stage narration of his text about black upbringing, and about his interactions with his son. This section of the presentation (there was no printed program, which might have served as a useful guide) was accompanied at first by simplistic invocational themes on piano by Roumain, who then switched to violin, at times employing pizzicato with the bow clenched between his teeth.

A couple of sections later, Joseph’s words --- more dynamic as narration and sermon than as subtle, lyrical poetry — were joined by projected historical videos of a youthful Angela Davis and the Black Panthers, and by St. Juste, who sang in an endearing soprano, also youthful. It could be said that St. Juste’s voice, Roumain’s composition and instrumental performance, and Joseph’s lyrics were of a piece: user-friendly, not particularly virtuosic, but certifiably sincere. This was all set forth in a language that spoke to the SFJAZZ audience, if not always to this reviewer.

It was the language of Dollaz’s body that spoke loudest to me, and confirmed what I’d heard from him in a YouTube video, that “music taught me how to feel.” He’d begun as a street dancer, and without any ballet training had incorporated pointe technique to avoid the unwanted sound of dragged feet. This allowed him to develop a magnetizing mode of creeping or gliding in a sort of magical moonwalk. Dollaz showed me he moves with everything: the music, Joseph’s own onstage movements (which Dollaz sometimes doubled), the evocative events and emotions of Joseph’s personal stories (including tales of youthful indiscretions and the evolution of his relationship with his own son), and the ineffable conditions permeating a culture struggling to go right, under the burden of past and continuing wrongs.

In fact, one of the best parts of Joseph’s narrative, aesthetically, was when he engaged Dollaz with the pulsing power of a hip-hop rap. Another was his honest accounting of a “rite of passage” and “internalized self-hate,” in which he found himself, on the streets of a city, fearing younger black men who could have been his own son or “the shadows of my youth.”

Equally strong were what appeared to be prerecorded interviews with incarcerated black youth (again, a printed program would have helped), accompanied by stunning projected closeups of African-Americans of various ages, some of them, I believe, taken by Oakland photographer Brittany “Brittsense” Sensabaugh, who was in the audience. A few sections of comic relief included “Seventeen Quick Reasons Why I Smoke Weed,” paired with “Three Reasons Why My Son’s Car Should Not Smell Like Weed.” The humor was more chuckle-worthy than outright hilarious or insightful, but it enhanced the father-son theme of the show and worked well with the visuals and music (Roumain hooking his violin up to electronic effects) and as a contrast to the more sober sections of the show.

Although not necessarily of musical merit, Roumain’s placid approach to composition and performance has the virtue, like some movie music, of undergirding while staying out of the way of the verbal content. His violin did validate its own musicality with affecting improvisation on the African-American anthem, “Lift Every Voice.” I could have used more of that. The projected films, credited to David Szlasa, were particularly compelling when the black skin tones were polarized, either as jet black or as ashen white.

It was also worth listening for occasional passages of well-wrought prose and poetry from Joseph, as when he stated, “Democracy is a slow dance between the Central Park 5 and the 45th president,” and when he asked, “Where do I fit if I cannot roam?” Joseph is not a firebrand, though; he’s an illuminator.

And, he’s an educator. At the end of the evening, Joseph screened one of three short films associated with The Just and the Blind, which will later be accompanied by a distributed curriculum. It was artfully shot and edited, and included some of the words and scenes about Joseph’s son that had been heard and seen earlier.

A Q&A session served further to engage this audience, and to allow for love to permeate the fourth wall. Noting that the show will be moving on to Amsterdam, Joseph admitted that, “I’m pulled away from my home in Oakland much more than I’d like to be.” He did point out, though, that his new show, The Black (W)hole, will debut at Oakland’s Laney College in April, with participation from that city’s Destiny Arts Center. Although he was “raised in the literature of hip-hop,” Joseph acknowledged the influence of Brazilian Paulo Freire, author of Pedagogy of the Oppressed.

It was clear that The Just and the Blind itself stands as a response to an audience member’s question about how to guide youth toward “intentional journeys.” Roumain, who teaches at the New School and will be teaching at Dartmouth, added, “We’re all going to contribute to our world, and to our creative space.”

The rarely performed opera is set in a hostel along the underground railroad.

The Poetry of Jazz

The venerable pairing of spoken verse and improvised music is blooming with new vigor.