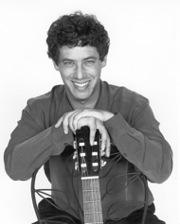 San Francisco is one of the best places in the world for people who love the classical guitar. The Omni Foundation and San Francisco Performances regularly present the world’s finest performers in concert, and the San Francisco Conservatory of Music, which has developed what many say is the best guitar program in the country, is educating a new generation of expressive and interesting artists. At the Conservatory, superstar guitarist performer-teachers Sergio Assad and David Tanenbaum get most of the attention, but the less well-known collegiate faculty are also amazing artists. One of them, Marc Teicholz, was awarded first prize at the prestigious Guitar Foundation of America Competition, has an international performance career, and has made an impressive series of recordings. He gave an exquisitely sensitive and skillful recital at the Conservatory on Saturday, featuring new transcriptions, music associated with Segovia, and extraordinary contemporary compositions.

Mendelssohn and Schubert did not write for the guitar, and transcriptions of their music are rare. Segovia played Mendelssohn’s Venetian Boat Song from the Songs Without Words, Op. 19, and Canzonetta from the String Quartet No. 1, Op. 12, but his example has in this regard not been followed by many guitarists. Teicholz began his recital with exquisitely restrained and evocative interpretations of Consolation and Venetian Boat Song and followed with a fiery Canzonetta. Schubert’s Impromptus, Op.90, though more abstractly titled, are also vivid Romantic portrayals of scenes or moods. Teicholz used a sensuous tone and a fluid rubato to make Impromptu No. 3 redolent of profound longing. His brilliant technique and natural musicianship perfectly captured the insouciance and grace of Impromptu No. 2.

The Chaconne from J. S. Bach’s Partita in D Minor, BWV 1004, originally written for solo violin, has been considered one of the greatest tests of a guitarist’s technique and musicianship since it was first performed by Segovia in 1935. Teicholz used color, dynamics, and a finely honed sense of timing to bring out the increasing tension, chromaticism, melodic span, and rhythmic values of the opening. The daunting 32nd-note scales were effortlessly executed and the transition to the internal major key section was exquisite. Teicholz is a skilled yet self-effacing performer with a superb sense of musical structure. He gave an exemplary Chaconne performance.

The second half of the recital was dedicated to contemporary music for the guitar and began with Sergio Assad’s compelling Sonata. Teicholz clearly articulated the first movement’s exuberant references to Leo Brouwer’s Sonata, the heartfelt melody of the second movement, and the breathtaking perpetual motion of the third movement, all while maintaining absolute clarity in a contrapuntal texture that at times was so complex it brought to mind the Assad Duo. The composer was present and on his feet applauding Teicholz’s bravura performance as soon as the last rasgueado chord was stopped.

In spoken remarks to the audience, Teicholz made clear that the second half of the concert could serve as an homage to his San Francisco Conservatory colleagues and that he would follow the Sonata written by Sergio Assad with All in Twilight by Toru Takemitsu, a composer who had a long association with David Tanenbaum. Teicholz informed the audience that he had obtained Tanenbaum’s advice when preparing the piece and that if anyone was unhappy with the performance they should assume it was Tanenbaum’s fault. Fortunately, what followed was a subtle and fluid performance of an impressionistic masterpiece.

Joaquin Rodrigo’s Sonata Giocosa is an enjoyable and humorous work that features chords with ostensibly wrong notes added for flavor, a contrasting and solemn middle movement, and a vigorous Spanish dance in 6/8 time with abundant rhythmic displacement and delightful glissandos with which Teicholz reinforced the predominant mood of wit and humor. The capacity audience responded with enthusiastic applause.